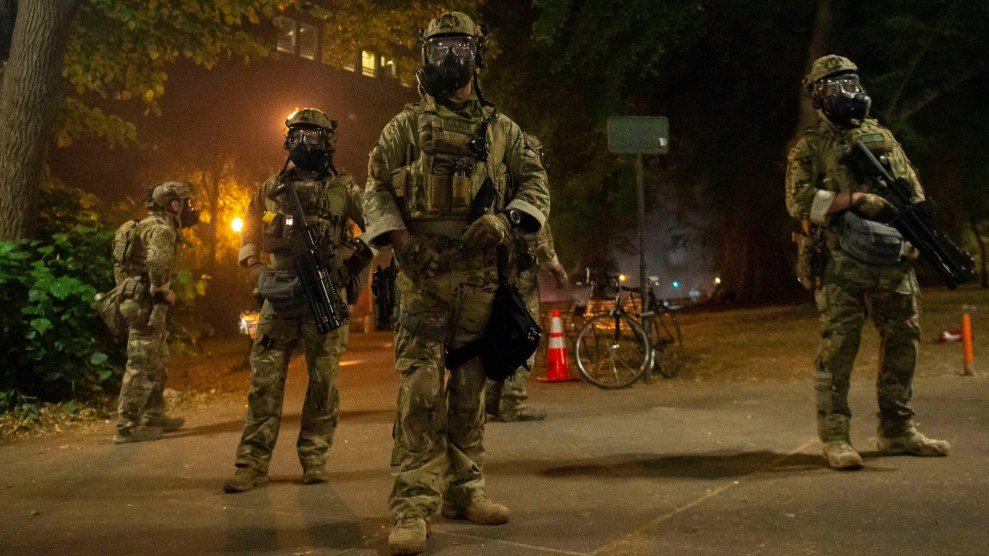 Portland has been invaded by federal agents—including unidentified, camouflage-clad officers who have emerged from unmarked minivans to arrest protesters. These officers have reportedly refused to say what agency they work for. But their supposed authority to police Oregon’s largest city and make arrests appears to rest on a June 26 executive order by President Donald Trump calling for the protection of statues, monuments, and federal property.

Black Lives Matter protests in Portland have continued this month, drawing attention from Trump, who falsely described the city as “totally out of control.” Trump also threatened this week to “take over” cities he claims are suffering from crime sprees. Agents from US Marshals Service, Federal Protective Service, Homeland Security Investigations, and US Customs and Border Protection (CBP) have been in Portland since early this month. But on July 14, protesters began to document instances in which armed agents wearing masks and military-style fatigues emerged from unmarked vehicles, detained protesters with no explanation, and drove away.

Militarized Federal Agents from a patchwork of outside agencies have begun policing Portland (in rented minivans vans) without the explicit approval of the mayor, the state, or local municipalities. This is what that looks like in practice: pic.twitter.com/losap4SsgI

On Friday, a Customs and Border Patrol spokesperson said that officers from the agency, which is part of the Homeland Security Department, carried out the arrest shown in the above video. The spokesperson said:

“CBP agents had information indicating the person in the video was suspected of assaults against federal agents or destruction of federal property. Once CBP agents approached the suspect, a large and violent mob moved towards their location. For everyone’s safety, CBP agents quickly moved the suspect to a safer location for further questioning. The CBP agents identified themselves and were wearing CBP insignia during the encounter. The names of the agents were not displayed due to recent doxing incidents against law enforcement personnel who serve and protect our country.”

The spokesperson did not say how many other arrests Border Patrol agents may have carried out in the city. No violent mob is visible in the video.

Mark Pettibone, who the Washington Post identified as the protester referenced in the CBP statement, has said he was detained without cause.

“I am basically tossed into the van,” Mark Pettibone told Oregon Public Broadcasting Thursday. “And I had my beanie pulled over my face so I couldn’t see and they held my hands over my head.”

Pettibone, who said he did nothing illegal and didn’t know why he was detained, recounted being taken to a building he later learned was Oregon’s federal courthouse, where he was Mirandized and searched. He said that after he declined to answer questions and asked for a lawyer, the interview ended and he was released after 90 minutes with no explanation or paperwork.

Federal agencies active in Portland say that they are protecting the Hatfield Federal Courthouse and nearby facilities in the city’s downtown. When Mother Jones asked the Homeland Security Department for details of what DHS agents are doing in the city, a spokesperson sent a press release in which acting DHS Secretary Chad Wolf described nearly 100 incidents allegedly perpetrated by “violent anarchists”—mostly vandalism of the courthouse and other federal buildings. (A typical example: “Violent anarchists graffitied the Hatfield Courthouse.”) The list also included allegations that protesters pointed lasers at officers to blind them; threw rocks and shot fireworks at the courthouse; and committed assault. The release states that Portland police arrested a person with a loaded gun.

“Each night, lawless anarchists destroy and desecrate property, including the federal courthouse, and attack the brave law enforcement officers protecting it,” Wolf said in the release. “A federal courthouse is a symbol of justice—to attack it is to attack America.”

Wolf claimed Oregon officials were failing to enforce the law. “Instead of addressing violent criminals in their communities,” he said, “local and state leaders are instead focusing on placing blame on law enforcement and requesting fewer officers in their community.”

The Associated Press reported last week that members of “an elite Border Patrol tactical team” based on the US-Mexico border have been in Portland since early this month and are mixed in with Federal Protective Service officers outside the courthouse.

On Thursday, a CBP spokesperson said the agency would not “disclose specifics about our personnel deployed as it could jeopardize operational security.” But the spokesperson said that Border Patrol agents in Portland do have authority to “conduct arrests for offenses committed in their presence.”

“Border Patrol agents have been deployed to Portland in direct support of the Presidential Executive Order and the newly established DHS Protecting American Communities Task Force,” the spokesperson said. “As a law enforcement component under DHS, CBP will be providing support, as needed at the request of the Federal Protective Service, to protect Federal facilities and property.”

Trump’s executive orders directs the departments of Justice, Homeland Security, and Defense to provide “personnel to assist with the protection of Federal monuments, memorials, statues, or property.”

“Platoons self-designated and self-mobilized by Donald Trump to be flown thousands of miles into US cities to attack Americans fits the definition of abuse of power in any democracy,” Wyden said. “The legal justification is absurd—Trump’s occupation has nothing to do with statues. If that executive order is their basis of their authority, they are massively exceeding it and those involved should find their federal employment terminated before this is all resolved.”

The federal response in Portland appears to some extent to track the government’s response to protests last month in Washington, DC, which also included a swarm of federal law enforcement, among them unidentified federal agents. But that response was overseen by the Justice Department, while DHS seems to be taking the lead in Portland.

The New York Times reported recently that Wolf has eagerly responded to Trump’s push to defend monuments and statues by dispatching “Border Patrol agents, Immigration and Customs Enforcement officers, Coast Guard personnel and air marshals—to back up the Federal Protective Service,” and has sent such teams to “the National Mall and the federal courthouse in Portland, as well as Gettysburg National Military Park,” as part of this mission.

The federal presence in Portland has enraged local elected leaders, especially after a member of a US Marshals tactical unit shot a 26-year protester in the head with an “impact munition.” The protester, Donavan La Bella, was initially listed in critical condition. La Bella was downgraded to serious condition earlier this week but reportedly remained hospitalized Thursday.

The Justice Department’s Inspector General is investigating La Bella’s wounding, according to the Oregon US Attorney. A DOJ spokesperson did not respond to questions about the mission of the US Marshals, who are part of the department, in Portland.

Portland Deputy Police Chief Chris Davis has said his department did not request federal assistance and is not coordinating with the federal officers. “I don’t have authority to order federal officers to do things,” Davis told the AP. “It does complicate things for us.”

“The apparent lack of operational coordination between agencies, departments, and offices, and the violence perpetrated by federal personnel is particularly concerning,” wrote Wyden, Sen. Jeff Merkley, Rep. Earl Blumenauer, and Rep. Suzanne Bonamici—all Oregon Democrats—in a July 14 letter to Attorney General William Barr and Wolf. “Their presence and lack of coordination raises urgent concerns about how those engaging in illegal use of force against demonstrators will be held accountable.”

This political theater from President Trump has nothing to do with public safety. The President is failing to lead this nation. Now he is deploying federal officers to patrol the streets of Portland in a blatant abuse of power by the federal government. https://t.co/PdlZkmW0mQ

But Wolf, who arrived on Thursday in Portland and posed for photos in front of graffiti, says his agents aren’t going anywhere. “I offered them DHS support to help them locally address the situation that’s going on in Portland, and their only response was: ‘Please pack up and go home,'” he said Friday on Fox News. “That’s just not going to happen on my watch.”

*This article has been updated with a new response from a Customs and Border Patrol spokesperson related to an arrest in Portland this week.