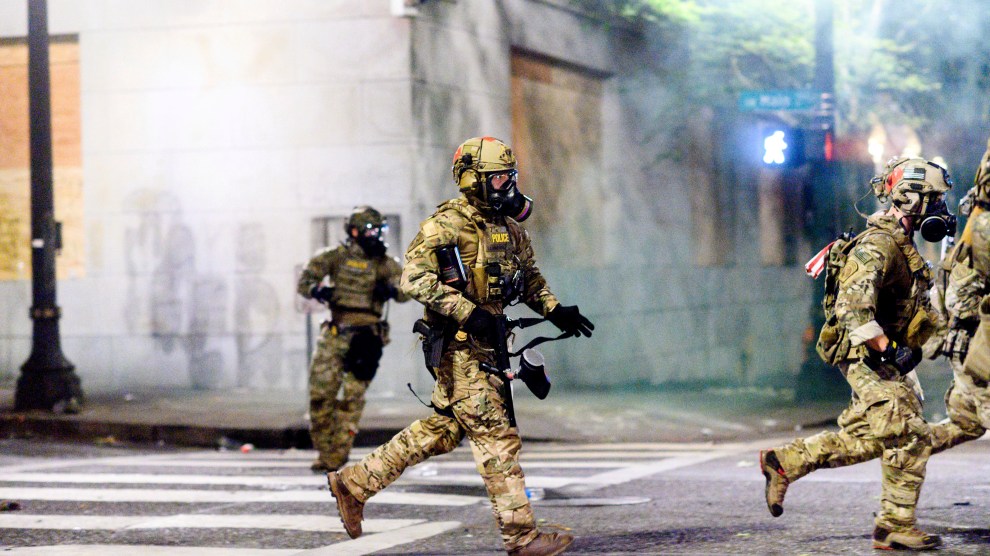 President Donald Trump on Wednesday spoke during a press briefing about a plan to send hundreds of federal law enforcement officers to Kansas City, Chicago, and Albuquerque to combat what he called a “shocking explosion of shootings, killings and murders.” As part of a new strategy called Operation LeGend, Trump will also increase federal funding to these jurisdictions so that they can hire hundreds of additional local police officers.

For more than a month, protesters around the country have been calling to defund and dismantle police departments. Trump has taken an opposite stance. “We will never defund the police,” he said during the press briefing. “We will hire more great police. We want to make law enforcement stronger, not weaker.”

For more than a month, protesters around the country have been calling to defund and dismantle police departments. Trump has taken an opposite stance.

Operation LeGend was named after LeGend Taliferro, a four-year-old boy who was shot and killed in his bed in Kansas City in June by a gunman who was never identified. The strategy was first announced by Attorney General Bill Barr earlier this month. As part of the operation, law enforcement officers from the FBI, the Homeland Security Department, the Drug Enforcement Administration, the US Marshals Service, and the Bureau of Alcohol, Tobacco, Firearms and Explosives will supposedly work with local police to investigate shootings and arrest the perpetrators. “We will find them, arrest them, and prosecute them. And they will be in jail for many years to come,” Trump said, adding that the strategy would soon be expanded to other cities. The federal government will also provide $61 million in grants for these cities to hire more local police officers, he said.

Trump, whose campaign has raised funds off a claim that safety is his top priority,  justified the surge in law enforcement by pointing to rising gun violence in Chicago and other cities in recent months. He blamed anti-police protests for this trend—ignoring the fact that gun violence often flares during the summer, and that stressors from the pandemic, like stay-at-home orders and widespread unemployment, could be making the problem worse. Overall crime in large American cities is down compared with past years.

Trump has long threatened to use the military or federal agents to quell crime and political unrest. Most recently, federal law enforcement officers sent by his administration to Portland were accused of forcing people into unmarked vans last week as part of an attempt to break up protests against police brutality, as my colleague Daniel Friedman reported.

Overall crime in large American cities is down compared with past years.

Democratic politicians and activists in the cities targeted by Operation LeGend have voiced concerns about the plan, especially in light of the arrests of protesters in Portland. Chicago Mayor Lori Lightfoot has said that while she would “welcome actual partnership” to reduce crime, “we do not welcome dictatorship.” “We do not welcome authoritarianism, and we do not welcome unconstitutional arrest and detainment of our residents,” she said after speaking with federal authorities on Tuesday. In New Mexico, US Sen. Martin Heinrich said Wednesday that he opposed the surge of officers into his state. “This isn’t the kind of ‘help’ that Albuquerque needs,” he tweeted.

In Kansas City, activists have also protested against Operation LeGend. On Wednesday, Barr said the operation had already led to 200 arrests over the past two weeks. (A senior Justice Department official later clarified that 200 people have been arrested in the city since December 2019, not over the past two weeks.) So far, the Justice Department has shared details of just one arrest—of a man who allegedly possessed a gun and drugs but was not accused of involvement in any shooting. “We didn’t ask for this,” Lora McDonald, who leads More2, a faith-based organization in Kansas City that focuses on racial equity, says of the surge in federal law enforcement.”For us, it’s all very reactionary instead of getting at the root causes.”

In cities around the country, protesters are demanding that politicians invest less in police and more in social services like housing, job training, education, and medical care. Without these services, they say, it’s difficult to prevent people from engaging in crime or violence in the first place.

“We didn’t ask for this,” says Lora McDonald, who leads a faith-based organization focused on racial equity in Kansas City.

And many activists blame Trump and his Republican followers for exacerbating crime. “You cannot block living wages, you cannot deny people health care and equal access to quality education, you cannot suppress their voting rights, and then when they are left with no options, when crime is rampant, you then send federal agents in to arrest them,” adds Rev. Dr. Vernon Percy Howard Jr., president of the Kansas City chapter of the Southern Christian Leadership Conference, the organization first led by Dr. Martin Luther King Jr. “You created the context, climate, and conditions for crime and homicides. It’s absolutely unjust.”

This story was updated to reflect the comments from the senior Justice Department official about the number of arrests in Kansas City.