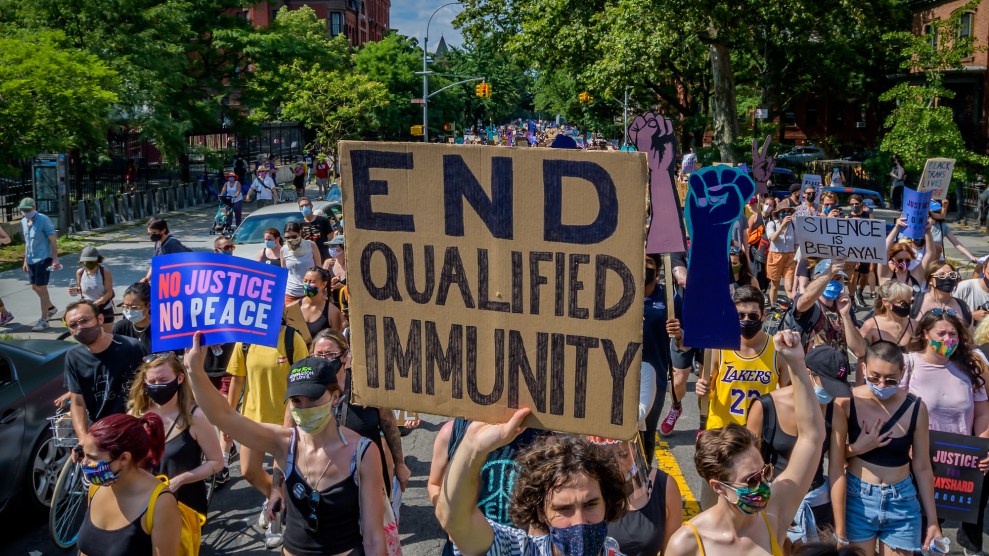 A federal judge in Mississippi published a scorching opinion on Tuesday calling on the Supreme Court to eliminate “qualified immunity,” the legal doctrine that gives police officers special protection from lawsuits when they violate people’s civil rights.

Judge Carlton Reeves, who was nominated in 2010 by President Barack Obama to the US District Court in the Southern District of Mississippi, opened his opinion by listing 19 killings of Black people at the hands of police before turning to the case before him, which involved a Black man, Clarence Jamison, who was subjected to a lengthy and humiliating traffic stop and search by a white police officer. Even though the officer had violated the Jamison’s rights, Reeves concluded, he was obligated to grant the officer immunity for his actions because of a series of Supreme Court rulings. Though he said he was bound by precedent, Reeve made no secret of his disdain for the legal logic behind it. “Over the decades,” Reeves wrote, “judges have invented a legal doctrine to protect law enforcement officers from having to face any consequences for wrongdoing. The doctrine is called ‘qualified immunity.’ In real life it operates like absolute immunity.”

One night in July 2013, Jamison was driving home to South Carolina after a vacation in Phoenix, Arizona, when a police officer, Nick McClendon, pulled him in over in Pelahatchie, Mississippi. Jamison was driving a Mercedes-Benz convertible he had recently purchased; McClendon later claimed that the car’s temporary cardboard license plate was “folded over to where [he] couldn’t see it.” In the ensuing traffic stop, McClendon lied repeatedly to Jamison, saying he had received a call that the car contained 10 kilograms of cocaine. After pressuring Jamison into allowing a search of the vehicle, McClendon did nearly $4,000 worth of damage to the car’s seats and top while Jamison stood on the side of a busy interstate for nearly two hours. No drugs were found. “Thankfully, Jamison left the stop with his life,” wrote Reeves, who is Mississippi’s second Black federal judge. “Too many others have not.”

Though Reeves ultimately ruled in the officer’s favor, he called on the Supreme Court to overrule its precedent, which requires officers to receive qualified immunity unless a judge in previous case with very similar facts found an officer’s actions to be illegal.

Earlier this year, the Supreme Court declined to take up a series of cases that would have offered an opportunity to challenge qualified immunity, which has come under fire during the nationwide uprising against police brutality and structural racism. At least two criminal justice reform bills in Congress call for abolishing qualified immunity for law enforcement. In his opinion, Reeves acknowledged the growing awareness about the doctrine’s flaws. “From TikTok to the chambers of the Supreme Court, there is increasing consensus that qualified immunity poses a major problem to our system of justice,” Reeves wrote, citing a TikTok video by Karan Menon.

“The status quo is extraordinary and unsustainable,” Reeves wrote. “Just as the Supreme Court swept away the mistaken doctrine of ‘separate but equal,’ so too should it eliminate the doctrine of qualified immunity.”

His opinion is well worth reading in full: