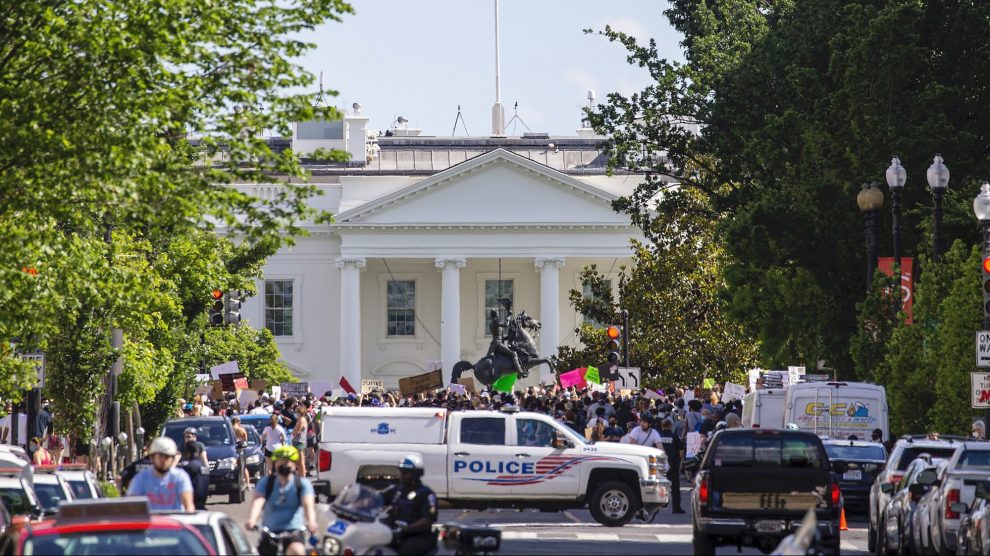 Protesters gather at Lafayette Square Park outside the White House on May 31, 2020 in Washington, DC.Tasos Katopodis/Getty

There is no more tear gas in front of the White House, where for weeks activists had gathered to protest against racial injustice and police brutality after George Floyd was killed by Minneapolis police on May 25. Though Washington, DC, demonstrations have slowed down since early June—when police violently cleared protesters from Lafayette Square for Trump’s infamous Bible photo shoot—groups like Occupy DC still maintain a presence there. But the atmosphere has changed. Now, activist-led yoga classes and group painting sessions draw sympathetic crowds. And the raw frustration that surged across the city in the weeks following George Floyd’s death has been redirected into specific policy demands—like cutting the police budget and firing its chief, Peter Newsham.

At first, the protests were spontaneous without any formal organization. But they wore on over weeks and months, and after most protesters packed up and returned to what passed for normal routines during the pandemic, a small number of local activist groups emerged to continue the effort to bring accountability to the city’s law enforcement.

Mahadi Lawal, a 26 year-old organizer with Occupy DC, once worked in the restaurant industry as a server, but when his employer shifted to takeout only during the pandemic, he was laid off. Now he has no plans to return, having become one of the leaders of Occupy DC, a racial justice movement focusing on the nation’s capital. I caught up with Lawal by phone to hear how activism has evolved since protests began in late May.

The last three months have brought into sharp relief many issues that have been problems for a long time. Aside from the police killings in other parts of the country, was there a moment here in DC when you realized you had to devote yourself to this movement?

The realization of what I should be doing was kind of gradual. Obviously, the first moment was on May 25, watching the eight-minute-and-46-second video of George Floyd being murdered. That motivated me to get up and start going out to protest to make sure my voice was heard. I was very consistent; I kept going. The second thing that happened—a big turning point for me—was on June 2 when I was protesting in front of the White House. I was moving back, as per police instructions, when I was struck on the cheek by a flashbang that the police shot. Basically, it exploded on the right side of my face. I was extremely traumatized. I was deaf for about five minutes. I couldn’t see or hear anything. I was just rolling on the ground screaming.

After that, I decided that I was going to be there every day.

Then on June 24, around 2 a.m., I was out there protesting on Black Lives Matter Plaza, standing right on the words. An old man was being arrested, detained by the police. I went up to record the arrest. I was following him and police pushed me back, and I kept following. They decided that my actions were assaulting a police officer and they slapped me on the ground and detained me, arrested me, and kept me overnight.

We can be organized. We can mobilize. We can actually demand change and do something together—as opposed to just misguidedly protesting every day.

I managed to get in touch with one of my friends from inside and my friends mobilized. I had so much support while I was in jail, and I came out to maybe 50 or so people waiting there for me. Just seeing that showed me that, we can be organized. We can mobilize. And we can actually demand change and do something together—as opposed to just misguidedly protesting every day. That really made me want to get organized.

The actions of the police, in a weird way, illustrated that the very dynamic protesters were demonstrating against was what they faced. It’s like the police have mismanaged this so they became the explanation for why everyone came out in the first place.

It would be really simple to just placate the protesters like us and be like, “Okay guys, we’re just going to chill out. We’re not bothering you.” And people will stop protesting. They tried doing it in a lot of cities, with the cops marching with people or kneeling, but that hasn’t happened here. What has happened is the mayor going to brunch with the chief of police.

This has been the first time that there’s been a massive call to defund and abolish the police. The previous protests have really centered around getting justice, like arresting the cops and charging them. Now, lot of people want cops arrested—like the cops that murdered Breonna Taylor—but at the same time, there are a lot of people that understand that if we want to abolish the police, that means that they have to be abolished for everyone. We have to come up with other ways to deal with it and address these things in our community.

Why do you think this movement hasn’t faded out?

People are living in very uncertain times, not knowing whether they’re going to have another paycheck. Lack of trust in the government, I think, is at an all time high. This was just something that happened at the right moment, where there’s a combination of millions of people—angry, disenfranchised, dissatisfied—and they had a lot of free time because they don’t have jobs. So people were willing and ready to fight and support each other. The whole quarantine created a pretty huge community network and really brought things like mutual aid and dual power to the forefront where we have communities just supporting themselves and people supporting themselves—and the government not doing anything.

It’s going to be a sustained movement. It’s going to keep going because people realized that the fight is a long-lasting battle. We can’t give up until we get the change that’s necessary.

How have things changed since everyone was first out there at the end of the May? Could you take me through how this group DC protest groups have evolved?

There were obviously already social justice organizations before this. Everything didn’t just pop up over the past few weeks. Those organizations were active but not as much as they needed to be. Specifically at the end of May, we had a lot of individuals taking the mantle and deciding, “Okay, I’m just going to go on Instagram, and I’m going to start my own protest. I’m going to arrange a demonstration.” That’s how I got familiar with a lot of the first demonstrations. I had a friend on Instagram who decided that he’s just gonna post a place and a time and tell people to show up and march.

Some organizations started coming together. Some were people in the same industry or who had the same hobby. There were protest groups of cyclists. There’s also Bartenders Against Racism, which popped up very recently. And others were groups of people who had met each other at the protests and had each other’s back consistently. The group came together out of proximity.

Between the 15th and the end of June, the whole White House area became sort of an open-air flea market. That’s part of the reason why we came together with Occupy DC. We staged our sit-in on the 3rd because there was no direction as far as protests. People were no longer coming there every day to occupy the space and demand change.

The energy had shifted. It’s good that people aren’t being violent and being attacked anymore, but it’s bad that people aren’t here. So we decided to start doing these protest-centered events, right there on the Plaza to bring people back and make sure that everything is still fresh in their minds.

Yoga is a big thing I’ve seen down by the White House. It seems like folks are getting creative. But in addition to programmatic changes, how have the objectives changed? Are they becoming more specific?

Absolutely. At the start, we were all protesting about George Floyd’s murder and Breonna Taylor’s murder and Elijah McClain’s and so many others. And that was good. And our anger was directed toward the right place. But after all the anger subsided and the protests stopped—not that I want them to stop—we have to actually move towards changing the system. The most possible thing, or the most likely thing for us to change, is our position in our own communities. So we’ve narrowed our focus toward these needs and towards the DC council and the DC police department. Because, like I said, we’ve suffered abuse at their hands as well. We can’t direct our anger to police departments all across the country. Yes, abolish police all together, but it has to start within our own communities. Just like we’ve seen in Minneapolis, that’s possible. I think small victories, like that, are all we need to rack up, and we will get there.

In the short term, specifically for DC, what does success look like to you? A year from now, on the horizon.

A year from now ensuring that the MPD budget is at least $30 million less than it was this year, and then ensuring that the MPD budget will be reduced every single year. I think we managed to get it cut down by $15 million. But that $15 million was basically already kind of like a bonus thing. I’m hoping by this time next year, we’ve exerted enough pressure on the council and the mayor to reduce the budget. Another sign of victory would be the immediate resignation or firing of Chief Peter Newsham.

Over the last few weeks have there been any victories that you and the folks around you have chalked up already? What is the high point so far?

The high point was definitely getting the mayor to sign the emergency police reform bill, which says that police have to release body-worn camera footage and the names of officers involved in death or serious use of force within five days. That was really big for us but, again, a small victory. We still have to keep fighting for these things.