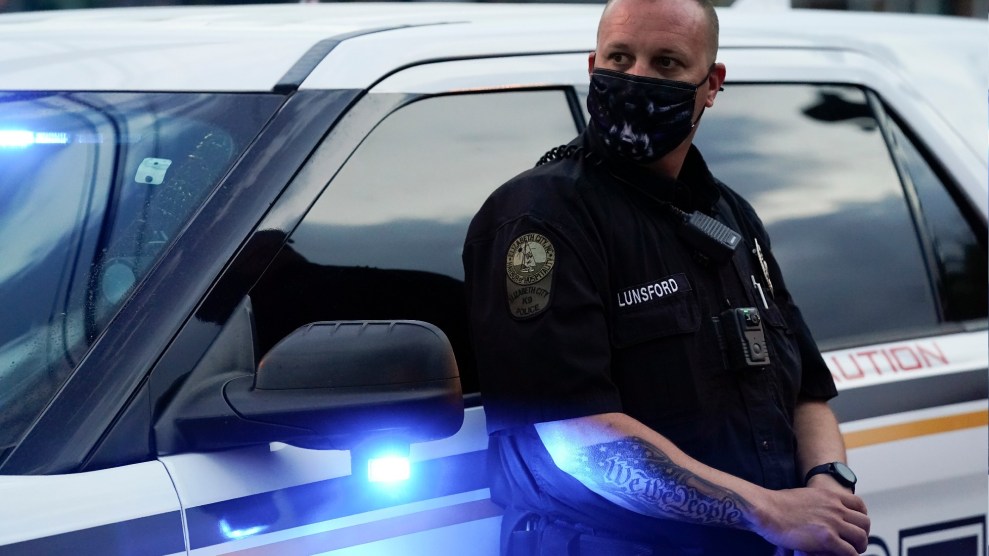 On April 21, while attempting to serve a warrant, North Carolina police shot and killed Andrew Brown Jr., a 42-year-old Black man in Elizabeth City. The entire incident was recorded, since the officers involved were wearing body cameras. But actually seeing the footage of the shooting has been a challenge for Brown’s family, lawyers, and the wider public.

Body-worn cameras are intended to provide transparency into policing. But they stop being a tool to protect the public from police brutality when the only people who end up with protection appear to be the cops who did the shooting, as seems to be the case with the officers who killed Brown. Body camera laws vary by state, but in North Carolina, local courts have authority over releasing footage. After the shooting, a North Carolina state judge ruled that Brown’s family could see the entire tape within 10 days, but there would be no release to the general public. In fact, Superior Court Judge Jeff Foster ordered the department to blur the faces and name tags of the police officers involved. “The release at this time would create a serious threat to the fair, impartial and orderly administration of justice,” he said in his ruling.

Brown joins an ever-growing list of high-profile deaths caught on police cameras. But, in many cases, instead of providing accountability, the cameras have mostly served as the conduit for a seemingly endless and traumatizing stream of police violence. In the short clip that the victim’s family was allowed to see, they say that Brown had his hands on the steering wheel as police fired bullets into his car. They called it not just a police shooting but “an execution.”

I started writing about police shootings and body cameras back in 2015 when the devices were heralded as one neat trick to fix policing. Six years later, the parallels are striking. Back then, after a string of high-profile shootings including Michael Brown in Ferguson, Missouri, and Walter Scott in North Charleston, South Carolina, the federal government provided local police departments with millions of dollars to outfit their law enforcement officers with bodycams. “The impact of body-worn cameras touches on a range of outcomes that build upon efforts to mend the fabric of trust, respect, and common purpose that all communities need to thrive,” then–Attorney General Loretta Lynch said.

But it quickly became clear that cameras wouldn’t transform policing in the ways the Obama administration had intended. In 2016, after Baton Rouge, Louisiana, police officers shot and killed Alton Sterling, both cops who were on the scene said their body cameras “fell off.” That same year, a Washington, DC, police officer simply didn’t turn on his camera until after he shot Terrence Sterling. In other instances, police departments have delayed releasing the tape altogether, which leaves the public and the victim’s loved ones to speculate on what happened.

It sometimes seems as if the mere presence of body footage becomes so threatening that it can inspire an excessive police response. When police departments and local officials agree to release videos of police killings, they often use it as a weapon. This week in Elizabeth City, a mostly Black town of approximately 17,000 people, a number of demonstrators demanded to see the video that depicted Brown’s final moments. In response, the mayor declared a state of emergency, set a curfew for 8 p.m. each night, and the police appeared at the peaceful protests wearing full riot gear.

Body cams did not create police accountability for the same reason that many previous attempts of reform have failed: The rank and file in the departments resist change. As my colleague Laura Thompson reported earlier this month, cops frequently ignore new reforms, such as restrictions on neck restrains and no-knock warrants. In the aftermath of George Floyd’s death a year ago in May, there have been many calls and proposals for reforming the police, including a comprehensive bill introduced by the Democrats. The use of bodycams holds a prominent place in all these proposals. But it turns out, they’re only as useful as police allow them to be.