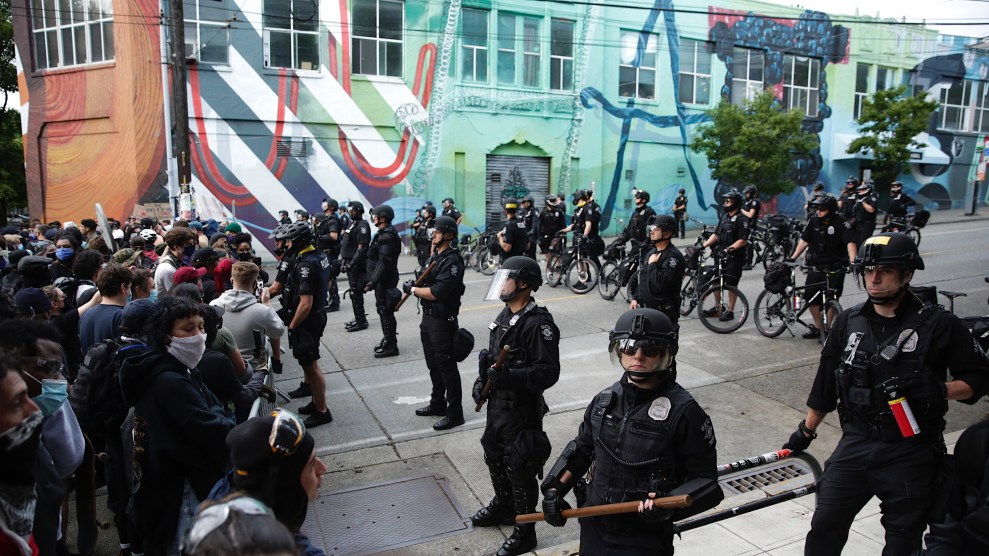 This story was originally published by ProPublica, a Pulitzer Prize–winning investigative newsroom. Sign up for the Big Story newsletter to receive stories like this one in your inbox.

We had culled the videos from hundreds circulating on social media in the wake of the protests and highlighted the cases that seemed to clearly show officers using disproportionate force. We then reached out to dozens of law enforcement agencies whose officers are in the videos and asked some straightforward questions: Have the officers’ police departments investigated the incidents? And what consequences, if any, have the officers in the videos faced?

As time passed, we’ve been checking in with the departments to get their answers.

After a year, we wanted to give a final update on what we know: Departments have disclosed discipline for 10 officers.

A Seattle Police Department officer received a written reprimand for striking a protester with “six to eight punches over six seconds.” In Grand Rapids, Michigan, an officer shot a man in the shoulder at close range with a long-range tear gas round. He received two days without pay. In Salt Lake City, an officer received “coaching and counseling” for using a shield to push an elderly man.

Six officers were initially fired, though two got their jobs back after a review. Criminal charges are also pending against 11 officers, including some who have already faced internal discipline.

In 17 cases that we followed, the departments have decided not to discipline the officers or could not identify them.

Investigations are still ongoing in 25 of the cases. This includes a high-profile case in Buffalo, New York, where two officers pushed a man backward, causing him to hit his head on the pavement. A grand jury dismissed felony assault charges against the officers, but a decision on departmental discipline is still pending.

The weaving journey of accountability has played out starkly around one of the cases in Atlanta.

In May 2020, the mayor announced the firing of two officers just a day after they were involved in the violent arrest of two college students who were pulled from a car.

But the officers quickly sued to get their jobs back, citing a lack of due process. In February, Atlanta’s Civil Service Board agreed. The two officers are once again employed by the department but remain on administrative leave. The incident remains under investigation. Criminal charges have also been filed against the officers, including assault, though the district attorney who brought them has since been voted out of office.

One reason departments have declined to comment on the status of cases is that the incidents have been subject to litigation. But the back and forth on such suits can be illuminating.

Responding to a lawsuit by a protester who was hit by a Los Angeles Police Department vehicle, the city wrote that the “force used against plaintiff, if any, was caused and necessitated by the actions of plaintiff, and was reasonable and necessary for self-defense.”

In about half of the cases we reviewed, including one resulting in discipline, the officer or officers involved have not been publicly identified. Sometimes, it’s not even clear which law enforcement agency they worked for.

In Minneapolis, where Floyd’s death occurred, sparking outrage across the world, a video captured the moment in May when officers patrolling a neighborhood fired paint rounds at a woman’s home while enforcing a curfew.

A Minnesota National Guard spokesperson told ProPublica the agency was “not involved” in the incident. The Minneapolis Police Department said the incident was “not our agency.” The Minnesota State Patrol said that it reviewed the video of the incident, and that “the officer who fired the marking round was not a State Patrol trooper.” When asked which agency the officers who fired the paint round were from, the spokesperson said it was “unclear.”