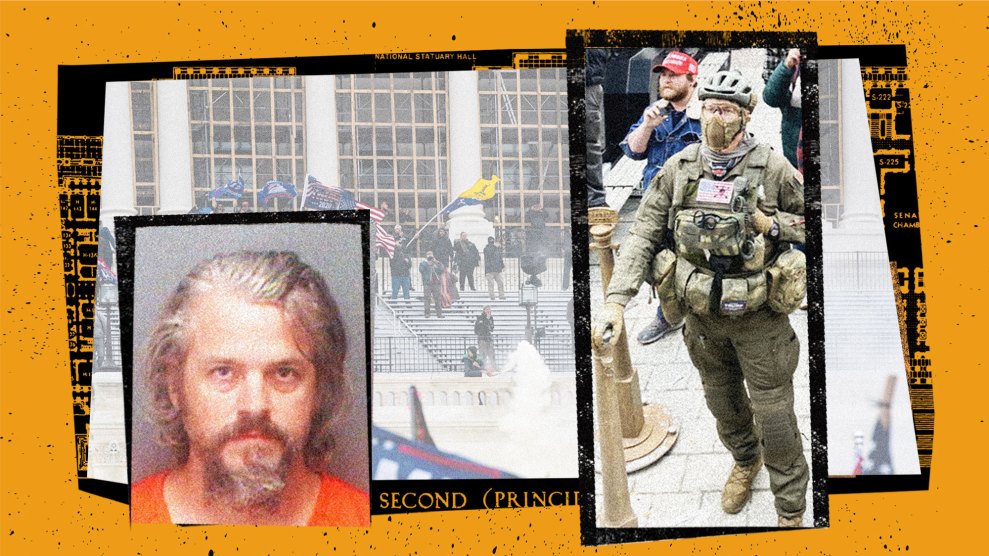 Since January 6, Republican lawmakers attempting to cover up the Trump-driven insurrection have claimed that no one brought guns to the US Capitol. That claim is false, as we showed in a recent Mother Jones investigation documenting an array of criminal cases—from a defendant who was armed on Capitol grounds and called for the overthrow of the US government, to an alleged operation in which numerous members of the so-called Oath Keepers, a loose-knit far-right militia, stockpiled firearms at a hotel near downtown DC for potential battle in support of Trump.

Since the end of September, further evidence has emerged linking armed extremists to the events of January 6, including in the case of an additional Oath Keeper charged with participating in the Capitol riot. According to a complaint and arrest warrant filed in DC federal court, 47-year-old Jeremy M. Brown of Florida, a US Army special forces veteran and briefly a 2020 congressional candidate, faces charges for his presence on restricted Capitol grounds and disorderly conduct in confrontation with police. The complaint contains photos showing that Brown was outfitted that day in “full military gear, including a helmet, radio, a tactical vest, and prominently displayed large surgical trauma shears tucked into a pack sitting on the vest,” according to the FBI. Brown also displayed a Trump logo on his tactical belt, the photos show.

The complaint further alleges that Brown and other unidentified individuals coordinated travel for January 6 using an encrypted messaging platform, communications in which Brown described plans to drive a recreational vehicle he referred to as “GROUND FORCE ONE” from Florida to DC.

“Plenty of Gun Ports left to fill,” he said in the encrypted group chat, according to evidence from the FBI. “We can pick you up.” The plan was to stop overnight in North Carolina and arrive in DC about a day before the congressional certification of President Joe Biden’s victory. “This will give us the 4th/5th to set up, conduct route recons, CTR (Close Target Reconnaissance) and any link ups needed with DC elements,” Brown messaged. According to the complaint, Brown brought guns with him on the trip but left them with unidentified people in Virginia and didn’t take them to the Capitol.

“Better bring a bigger Tactical Package,” Brown wrote on a sign addressed to law enforcement agencies that he posted outside his home.

In a second case, Brown faces federal gun charges stemming from the investigation of him since January 6. According to court documents filed in the middle district of Florida, federal agents who searched Brown’s home in Tampa in late September found a short-barreled semiautomatic rifle and a sawed-off shotgun—both unregistered in violation of federal law—as well as two “military ordinance” grenades.

Brown’s defense attorney did not reply to a detailed request for comment.

In court filings and during an October 5 detention hearing, federal prosecutors presented evidence in support of their argument that Brown remains too dangerous to release from custody, including an alleged threat Brown directed at the FBI and other federal and local law enforcement agencies. According to court filings, and prosecutors’ remarks as reported in the Tampa Bay Times, Brown called out those agencies in a handwritten sign he posted in front of his house following a visit from federal agents earlier in the year:

Re-read your Oath. You are being used as a Pawn by the Enemies of this Republic & your Liberties. If you don’t care & say to yourself ‘I’m just following orders,’ then Go Fuck Yourself. P.S. Better bring a bigger Tactical Package

Despite his apparent reference to the amount of force the feds would need to take him into custody, Brown said during the October 5 hearing that he was not making a threat with the sign, according to the Times. Brown said that he respected police and that he was not antigovernment, but was “anti-tyrannical government.” In arguing for his pretrial release, Brown and his attorney further suggested that the government was targeting Brown’s “freedom of speech” and his “skepticism of law enforcement.”

District Judge Sean P. Flynn ordered Brown detained, acknowledging in his ruling that Brown had a long and distinguished career in military service and no criminal history. Judge Flynn further emphasized that his decision was not due to Brown’s political beliefs or ownership of weapons. “You made a specific threat to law enforcement,” he told Brown, according to the Times, “and that’s something I can’t ignore.”

Brown’s actions in early January as described in the FBI complaint echo the alleged activity of other Oath Keepers charged in the insurrection. They include several Oath Keepers from Florida who drove to DC by way of a stopover in North Carolina, according to an Oath Keepers lawyer, and went on to stash guns at the Comfort Inn Ballston in northern Virginia, about 7 miles from the US Capitol, between January 5 and 7. As detailed in our recent investigation, multiple Oath Keepers stockpiled an “arsenal” at the hotel, as one group member described it, for potential use by a “quick reaction force” inside DC to battle perceived enemies of Trump, according to court documents.

The FBI complaint against Brown stated that just ahead of January 6, Brown “deposited his guns with individuals in Virginia and retrieved them after the riots.”

It is unclear whether Brown’s case connects with actions of other Oath Keepers facing charges. According to the FBI, evidence of his alleged crimes was corroborated by “Defendant 4,” an unidentified person in the complaint “who has pled guilty to Conspiracy to Obstruct an Official Proceeding relating to his conduct and the conduct of others in breaching the US Capitol.”

Since June, as we previously reported, three Oath Keepers have admitted guilt on conspiracy charges—two of whom drove to DC from Florida. According to the GW Program on Extremism, a total of 69 Floridians face charges stemming from the events of January 6, the highest number of such cases of any state.

Other developments further pointing to extremists carrying guns during the attack on Congress include recent reporting about an indicted Proud Boys leader who allegedly had a concealed weapon at the Capitol, newly unsealed evidence of a defendant stating he was armed during the riot, and a recently disclosed document showing that FBI agents were aware before January 6 of specific intelligence about armed people traveling to DC.

According to the New York Times, defendant Ryan Samsel, who is charged with assaulting police at the Capitol, told FBI investigators that Joseph Biggs, an organizer for the Proud Boys, had a gun in the crowd on January 6 and flashed it at Samsel as he urged Samsel to confront officers defending Capitol grounds. (Samsel has no publicly known connection to the Proud Boys.) A lawyer for Biggs denied the allegations to the Times, saying they amounted to a “tall tale.” Biggs currently faces charges including conspiracy, civil disorder, obstruction of an official proceeding, and destruction of government property, to which he has pleaded not guilty. He has not been charged with any gun crimes.

According to prosecutors, Smith sent a private message in which he “claimed that he had a pistol in his pocket during the riot on January 6.”

In the case of January 6 defendant Thomas H. Smith of Mississippi, who was indicted in May on 10 counts including assault on police, a court filing unsealed Tuesday described evidence suggesting Smith was armed at the Capitol. According to prosecutors, Smith sent a private message through Facebook in which he “claimed that he had a pistol in his pocket during the riot on January 6.”

As our recent investigation detailed, law enforcement officers who defended the Capitol testified to Congress that they believed the mob of Trump extremists was far more heavily armed with guns than is definitively known. Internal communications from January 6 among US Park Police and other agencies that have since been made public support that view. The lack of certainty, the officers told lawmakers, was a result of their limited capacity to make arrests that day amid the sheer number of people, compounded by fears that taking more aggressive action could set off perilous violence.

A document obtained recently by a government transparency watchdog, Property of the People, contains indications that the FBI had specific intelligence, prior to January 6, about armed people headed for the nation’s capital. According to emails circulated among FBI agents in the bureau’s Seattle field office on January 5, intelligence analysts with the Washington State Fusion Center had specifically noted social media comments suggesting that some residents of the state were “planning to travel armed to Washington D.C. for tomorrow’s protests there.”