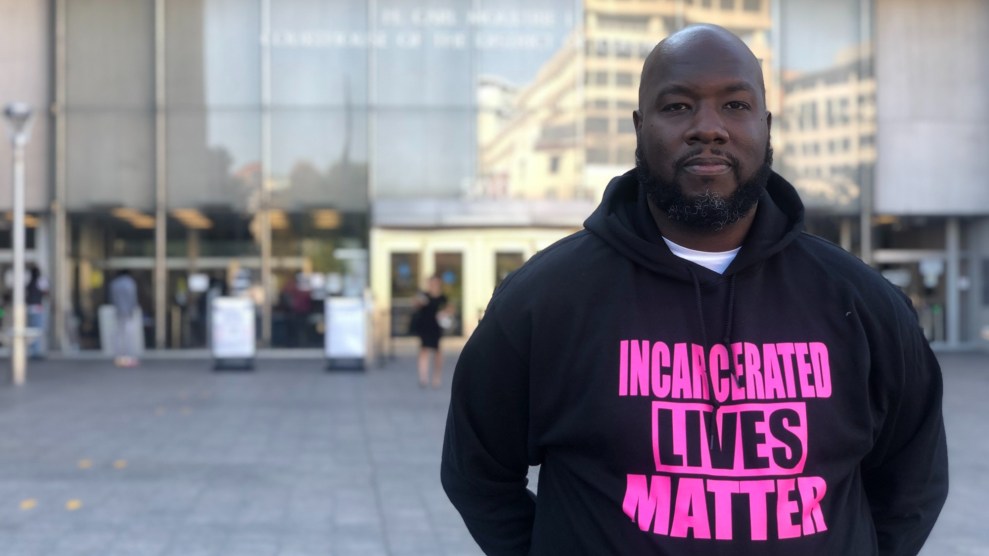 A group of protesters gathered outside the Washington, DC, Courthouse on Wednesday holding signs emblazoned with “Free Them All” and “Care Not Cages” to demand the release of detainees at the DC jail, many of whom have been awaiting trial for several months. “Our loved ones and our family members have been kept in that jail in feces and in urine. They’re being held in inhumane conditions,” Qiana Johnson, an organizer with the Black-led prison abolitionist grassroots group Harriet’s Wildest Dreams said to the small crowd. “Mayor after mayor, administration after administration—that jail has been the same.”

She added: “The DC jail is 87 percent Black and the moment that a white person enters into that jail, they want to make change. Shame!”

Johnson was referring to a new wave of public scrutiny and outcry over the jail’s dismal conditions that she and other activists say was prompted not by the long-standing mistreatment of people of color and efforts of advocates such as herself, but rather in response to complaints from a much smaller and whiter detained population: the January 6 Capitol insurrection defendants and one of their most outspoken champions, controversial Georgia Rep. Marjorie Taylor Greene.

In mid-October, US District Court Judge Royce Lamberth called for a Department of Justice investigation into the potential violation of the detained rioters’ civil rights and held jail officials in contempt of court for failing to turn over medical records that were necessary to approve surgery for Christopher Worrell, a defendant and member of the Proud Boys from Florida who has cancer and is being held on charges of pepper-spraying law enforcement officers, to which he has pleaded not guilty. Judge Lamberth has since ordered Worrell, whose many claims of medical mistreatment have been characterized by the DOJ as “unsubstantiated,” to be transferred to a different jail or released on home detention, calling the conditions at the jail deplorable.

Shortly after, the US Marshals Service for the District of Columbia conducted an “unannounced inspection” of two DC Department of Corrections (DOC) jails. They found that conditions at the Central Treatment Facility (CTF), where roughly 40 January 6 defendants are currently being held awaiting trial, didn’t call for a transfer for detainees. But according to the US Marshals assigned to the case, the Central Detention Facility, informally known as the DC jail, had “evidence of systemic failures” and didn’t meet minimum standards of confinement. The CDF has a total population of roughly 1,200, the majority of whom are Black, and are being held pretrial or serving time for misdemeanor offenses. Among the main findings were an “overpowering” smell of urine and feces, meals served cold and congealed, routine water shutdowns, and DOC staff “antagonizing detainees.” As a result of the inspection, the Marshals announced 400 people would be moved to a facility 180 miles away in Lewisburg, Pennsylvania.

“I am disappointed but not surprised,” Johnson told me after the rally. “It took one white person in a facility that houses 80 percent Black people for them to complain and for their voices to be heard. And now Black people are going to suffer because they’re going to be moved away from their families and from their lawyers. That’s a punishment.”

For decades, incarcerated people, activists, and public defenders have denounced the poor conditions, overcrowding, and unsafe environment inside the aging Southeast DC jail. In the 1970s, two lawsuits consolidated into a class action case led to a US district court finding that the conditions in the CDF violated a constitutional prohibition against cruel and unusual punishment. In the years since, the jail has made headlines for startling suicide rates, and the DC Department of Corrections has been repeatedly cited for violating industry standards, prompting calls for the construction of a new facility instead. Conditions only grew more dire during the pandemic. For months on end, people were confined to their cells for 23 hours a day, a lockdown measure that DOC director Quincy Booth said helped mitigate the spread of the coronavirus.

“It took one white person in a facility that houses 80 percent Black people for them to complain and for their voices to be heard.”

Many of the complaints from January 6 defendants housed at CDF mirror those by other detainees regarding the quality of food or interactions with correctional officers. In a Twitter thread shared by lawyer for the insurrectionists, Brad Geyer, defendant Nathan DeGrave called the jail “DC’s Gitmo”—a reference to the prison on the US military base at Guantánamo Bay that has become synonymous with human rights abuses—writing that “some inmates are even begging to be transferred to GUANTANAMO BAY, where even THEY have more acceptable standards.”

Their grievances, however, haven’t fallen on deaf ears. Instead, they’e been fully embraced by Republicans like Greene who are eager to paint the rioters as “political prisoners.” After touring both parts of the DC jail complex earlier this month, including an area in which the January 6 defendants are housed that has been dubbed “Patriot Wing,” Greene compared what she saw to “walking into a prisoner of war camp and seeing men whose eyes can’t believe someone had made it in to see them.” Appearing on Steve Bannon’s War Room podcast, Greene told listeners that the defendants were living in worse conditions than homeless people and terrorists. “You should be outraged and disgusted that our government has turned into some kind of political weapon that tortures people in jail,” she said,  “and wants to re-educate them and make them denounce the president that they love and denounce the country that they love.”

Other issues those detained for their violence at the Capitol have raised include being force-fed “CRT propaganda” and “anti-White Racial messaging,” and having haircuts, religious services, and visits denied for the unvaccinated. “Even in jail, in prison, unvaccinated people are treated like second-class citizens,” Greene said on Fox News. She apparently also took the opportunity to review religious reading materials available at the jail, finding “common ground” with Louis Farrakhan’s Nation of Islam newspaper for its opposition to vaccine mandates.

Marjorie Taylor Greene is very upset after visiting the jail for the Jan 6 detainees. pic.twitter.com/vZiDgqxE6O

During a DC City Council Committee on the Judiciary and Public Safety meeting on Wednesday, which wasn’t attended by DOC officials, council members and DC Attorney General Karl Racine echoed a question posed by the Washington Post editorial board in an article last month: “Why was no attention paid the problems when it was poor Black and Hispanic people complaining about the conditions?” That same day, Mayor Muriel Bowser announced a memorandum of understanding signed between the DOC and the Marshals to “improve conditions and address any deficiencies at our DOC facilities.”

The reports about conditions at the DC Jail are damning and deplorable.

Council and local communities have raised questions about this for years, including oversight hearings in February.

It's equally damning that we're only seeing action after insurrectionists were held there. pic.twitter.com/MYGBx2Ea3L

At the courthouse rally, James Hutchings, a father of eight and founder of the reentry services nonprofit Incarcerated Males and Females, described his five months at the DC jail. Two weeks before he was released with an ankle monitor on March 26, 2020, he said he was assaulted by ten correctional officers who mistook him for someone else. “It’s the worst experience I’ve had in my life, and I’ve been to prison and I’ve been to state jail,” he told me. “DC jail trumps it all—I wouldn’t wish it on anybody.” Public defender Mani Golzari said the “system is rotten to its core” and needs to be dismantled. “People are tired of having to deal with the conditions we hear about every time we go inside the DC jail,” he said.