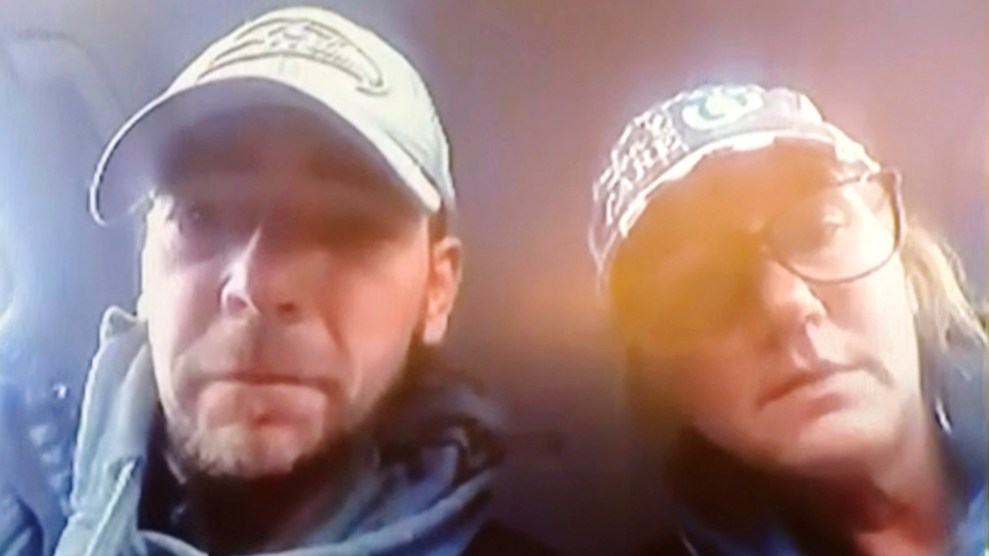 James, left, and Jennifer Crumbley are shown during the video arraignment of their son, Ethan Crumbley in Rochester Hills, Mich., on Wednesday, Dec. 1, 2021.AP

On Tuesday, 15-year-old Ethan Crumbley allegedly used a semiautomatic pistol to kill four students and wound seven other people at Oxford High School in Michigan. He faces murder and terrorism charges and will be tried as an adult. On Friday morning, Oakland County prosecutor Karen McDonald announced that her office will also prosecute Ethan’s parents, James and Jennifer Crumbley, who are charged with four counts each of involuntary manslaughter. The case against them is a first of its kind in a high-profile school shooting. Like any other Americans facing criminal charges, the Crumbleys are innocent until proven guilty in a court of law.

It was already clear this week from initial evidence about the contours and timeline of the attack that the backdrop to this case was dark. But the new evidence detailed by McDonald on Friday was nonetheless shocking, even for close observers of the mass shootings phenomenon. For the past decade, I’ve studied scores of these attacks in my reporting for Mother Jones and for Trigger Points, my forthcoming book on behavioral threat assessment, an emerging field that works to prevent mass shootings. I know of no other case involving such stark details of alleged parental negligence and involvement.

According to the criminal complaint described by McDonald at a press conference, the Sig Sauer 9mm pistol that Ethan used to kill fellow students was purchased by James Crumbley at a local gun store with his son present on November 26, four days before the rampage.

“Just got my new beauty today,” Ethan posted on social media that same day, according to the complaint, along with photos of the Sig Sauer weapon.

The day before the attack, an Oxford High teacher had “observed Ethan searching ammunition on his cellphone during class,” according to McDonald—a common warning behavior in school shooting cases. That prompted attempts by worried school officials to contact his parents via phone and email; the school got no response from the Crumbleys, said McDonald. Shortly after that outreach, Jennifer exchanged text messages with her son, according to McDonald.

“LOL, I’m not mad at you,” she allegedly texted to Ethan. “You have to learn not to get caught.”

By the morning of the shooting, graphically violent images Ethan had drawn in class prompted school officials to convene an urgent meeting with the Crumbleys and their son at the school. In his backpack, Ethan had the Sig Sauer and dozens of rounds of ammunition, according to prosecutors. Whether the parents may have suspected or been aware of that is unknown, but according to McDonald they did not ask about the whereabouts of the newly purchased weapon or inspect Ethan’s backpack. They left the high school, refusing a recommendation to take Ethan with them, according to McDonald. “He was returned to the classroom,” she said. Investigators further determined that the gun had been stored in an unlocked drawer in the Crumbley’s home. Prosecutors have not alleged that the parents were aware that Ethan planned to kill.

“I cannot recall a case where there was this kind of enabling going on,” said a longtime threat assessment expert. “This looks next level.”

A longtime threat assessment expert I spoke with on Friday indicated that the scenario with the parents in Michigan appears to be highly unusual. The expert, who specializes in school security, said: “I’ve seen many uncooperative or belligerent parents over the years dealing with threat investigations, lots and lots of denial. It can understandably get emotional. But no, I cannot recall a case where there was this kind of enabling going on, from what this one looks like, at least at a distance. This looks next level.”

An attorney representing the Crumbleys did not respond immediately to a request for comment.

There is at least one prior high-profile case in which a parent purchased a gun for his son: Kipland Kinkel, a student who committed a mass shooting at Thurston High School in Springfield, Oregon, in 1998, had obtained one of the weapons he possessed that way. Kinkel subsequently killed both of his parents at home the day before his rampage, in which he killed two students and wounded 25 other people. Kinkel remains in prison for life without chance for parole.

As of Friday afternoon, with Ethan Crumbley in jail and awaiting trial, local authorities announced that James and Jennifer Crumbley had not yet been arrested and that the county’s Fugitive Apprehension Team was searching for them along with the FBI and US Marshals Service. According to CNN, attorneys for the elder Crumbleys said in a statement that the couple had “left town on the night of the tragic shooting for their own safety” and were returning to be arraigned.

“I want to be very clear,” McDonald said on Friday, “that these charges are intended to hold the individuals who contributed to this tragedy accountable, and also send a message: that gun owners have a responsibility. When they fail to uphold that responsibility, there are serious and criminal consequences.” She added: “Justice for the victims and their families is at the forefront of today’s announcement. We need to do better in this country. We need to say, enough is enough.”

On Friday night, the US Marshals announced that the Crumbleys were fugitives and released wanted posters with up to $10,000 in rewards for help in their capture.

Early on Saturday morning the Crumbleys were arrested while hiding inside a Detroit commercial building close to the US-Canada border. An unidentified person who allegedly may have helped them could also face charges, the Detroit police chief said. The parents of the accused school shooter were arraigned on Saturday morning; they pleaded not guilty and are being held on a combined $1 million bond.