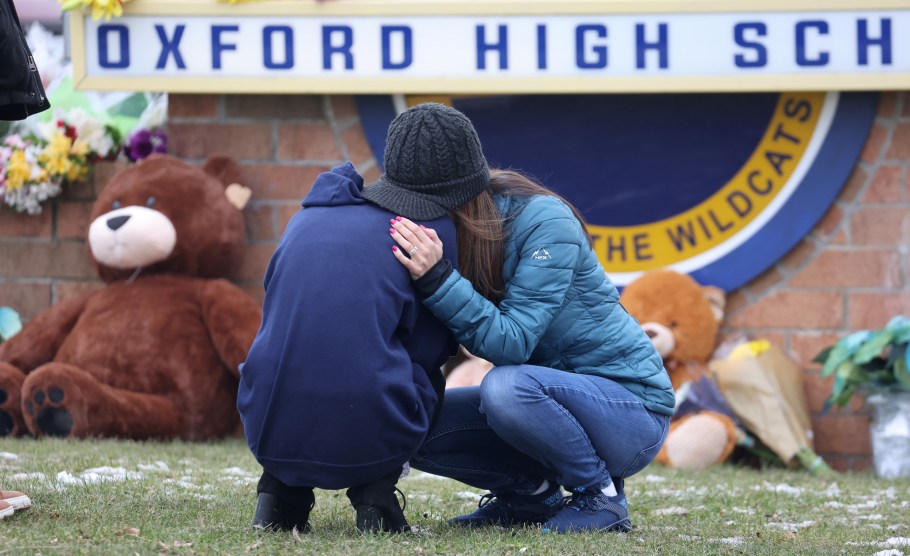 A makeshift memorial outside of Oxford High School on December 01, 2021.Scott Olson/Getty

In the aftermath of Tuesday’s mass shooting at Oxford High School in Michigan, local prosecutor Karen McDonald described succinctly during a press conference why the active-shooter drills now ubiquitous in America’s school systems won’t ever really rise to the task of solving this recurring nightmare. Lives may well have been saved, as local authorities said, after well-practiced students and teachers reacted to the attack by swiftly locking down classrooms and hiding, but that wasn’t enough. “The response was executed perfectly, yet four children were killed and multiple injuries occurred,” said McDonald, whose office is prosecuting the 15-year-old alleged perpetrator as an adult on murder and terrorism charges. “We really can’t train ourselves out of this tragedy.”

Her comments pointed directly to a simple yet crucial distinction in confronting the enduring plague of mass shootings: response versus prevention. Both are vitally important, but the nation’s emphasis remains heavily imbalanced toward response.

The focus in many parts of the country has long been on policies and tactics that by definition mostly come into play after it’s essentially too late. Dating back to the Columbine massacre in 1999, communities throughout America have reacted to high-profile tragedies like the one this week in Michigan primarily by adopting “target hardening” measures: assigning police officers to schools (known commonly as school resource officers), enhancing physical security and surveillance systems, and in some schools, arming teachers, administrators or other personnel. Particularly since the devastating attack nine years ago at Sandy Hook Elementary School in Connecticut, conducting lockdown drills for students has become the norm.

By contrast, prevention efforts in the broadest sense appear in many places to remain woefully inadequate. The continuing impact from lax gun regulations is clear. Regardless of one’s political views on gun laws, firearms remain undeniably easy for dangerous individuals to acquire throughout much of the country. Another major factor is too little focus on identifying and intervening with troubled people who might be poised to kill. That work, known as behavioral threat assessment and done by community-based teams with mental health and law enforcement expertise, is the subject of my forthcoming book, Trigger Points. In it, I chronicle the emergence of this field and its growing potential to become a powerful part of a national solution to mass shootings.

Big questions remain about what led up to Tuesday’s tragedy in Michigan, but as with so many of these cases, prosecutors have already stated that they have “a mountain of digital evidence” indicating that the alleged perpetrator, Oxford High sophomore Ethan Crumbley, had planned out his attack. Rumors about a potential threat circulated on social media, enough to give some students “a bad feeling” and prompt them to stay away from school. Images posted on social media and obtained by investigators appeared to show Crumbley flaunting a pistol and engaging in target practice ahead of the shooting. Cellphone videos he recorded the day before the attack and a journal he kept detailed his ambitions to carry out the rampage, according to authorities.

Moreover, school officials met with Crumbley the day before the shooting, and again the morning of—this time with his parents—to discuss concerns about his behavior, according to Oakland County Sheriff Michael Bouchard. “The content of that meeting obviously is part of the investigation,” Bouchard said. As the criminal investigation unfolds, time will tell what else may have constituted an array of warning signs missed.

Questions also loom large as to how Crumbley came to possess the Sig Sauer 9mm pistol and multiple 15-round ammunition devices that authorities said he used to fire more than 30 bullets at victims inside the school. Authorities confirmed shortly after the attack that his father had purchased the weapon on Black Friday, four days earlier. According to the Detroit Free Press, Bouchard said that Crumbley never left the school after the meeting with his parents and administrators the day of the attack; that meeting occurred a little after 10 a.m. The shooting took place shortly before 1 p.m., after Crumbley emerged from a bathroom with the weapon and began shooting students, whom investigators say they believe he targeted randomly.

It appears likely, in other words, that Crumbley had already brought the gun and ammunition with him to school, before the meeting with his parents and school officials. (An attorney for the Crumbley family could not be reached for comment.)

That narrative about a viral TikTok video of the shooter trying to trick his way into a classroom? Very likely false.

McDonald, the Oakland County prosecutor, said in a press conference on Wednesday that her office may bring criminal charges against Crumbley’s parents and would make that determination swiftly. Yet as Michigan Attorney General Dana Nessel described in an interview with the Free Press, the state does not have an explicit law for holding parents accountable: “Theoretically, if you had a case where you had a teenager who had demonstrated some sort of instability, mentally or suicidal or homicidal thoughts or actions…and in addition to that you still allowed this child to have unfettered access to a weapon, then theoretically I don’t think it would be a huge stretch to charge the parents with involuntary manslaughter under those circumstances.”

Some states have clearer laws with which to hold potentially negligent parents criminally accountable for gun homicides committed by their children, but as I detailed in a 2013 Mother Jones investigation into child gun deaths, many states historically do not have such laws, and those that do seldom have seen them used for prosecutions.

The unfolding of the Oxford High shooting on Tuesday underscored another problem seen with many mass shootings: wide circulation in the initial aftermath of misinformation and unreliable claims about perpetrators’ motives and actions. In this case, a video recorded by a student in a locked down classroom and posted on TikTok quickly went viral, framed by many who shared it as depicting Crumbley outside the barricaded door and trying to trick those inside into letting him in by posing as a law enforcement officer.

First, there is a loud knock at the door, as heard in the video. “Sheriff’s office,” a voice then announces from beyond the door. “It’s safe to come out.”

A person inside the classroom who had walked over to the barricaded door—possibly a student but whose identity is unclear—responds, “We’re not willing to take that risk right now.”

“OK, well come to the door and look at my badge, bro,” the voice outside replies.

Students in the back of the room begin to chatter in reaction. “He said ‘bro,’” one student says. “Red flag.”

The students continue to remain barricaded inside the classroom—following the protocols of lockdown drill training—and a short moment later they can be seen fleeing out a ground-floor window and into a secure area where a law enforcement officer and school staff give them instructions on what to do next.

The apparent perception among students in the TikTok video that the voice outside the door could have been that of the shooter spread like wildfire online and in the media on Wednesday. “Terrifying moment shooter tries to lure students out of classroom,” blared a video headline posted by the DailyMail, which reported that “chilling footage emerged Tuesday of the suspect…trying to convince would-be victims that it was safe to emerge from hiding. ‘Sheriff’s office,’ the boy says. ‘You can come out.’” Commentary on CNN and other news networks on Wednesday referred to the alleged ruse and the response to it from those inside the classroom.

And yet, this narrative about the perpetrator appears very likely to be false—it was disputed by Bouchard Wednesday during a press conference, in which he cited school surveillance footage. According to the New York Times, Bouchard said “investigators had been told that the gunman pretended to be an officer in order to access barricaded classrooms, but later said that reviewing video evidence confirmed that he had not knocked on doors. ‘We know from physical evidence he shot through doors up and down more than one hallway,’ the sheriff said.”

A viral video showing terrified victims and highlighting the role of the perpetrator in sensational (and potentially erroneous) terms is also precisely the kind of attention that many mass shooters seek. As I’ve reported in the past and explore much further in my forthcoming book, excessive and sensational focus on mass shooters has over the past decade exacerbated the copycat problem.

The region that is home to Oxford High School now knows this reality firsthand. By late this week, according to Bouchard, a “flood” of copycat threats was straining law enforcement resources and had prompted the closure of at least 60 Michigan schools.