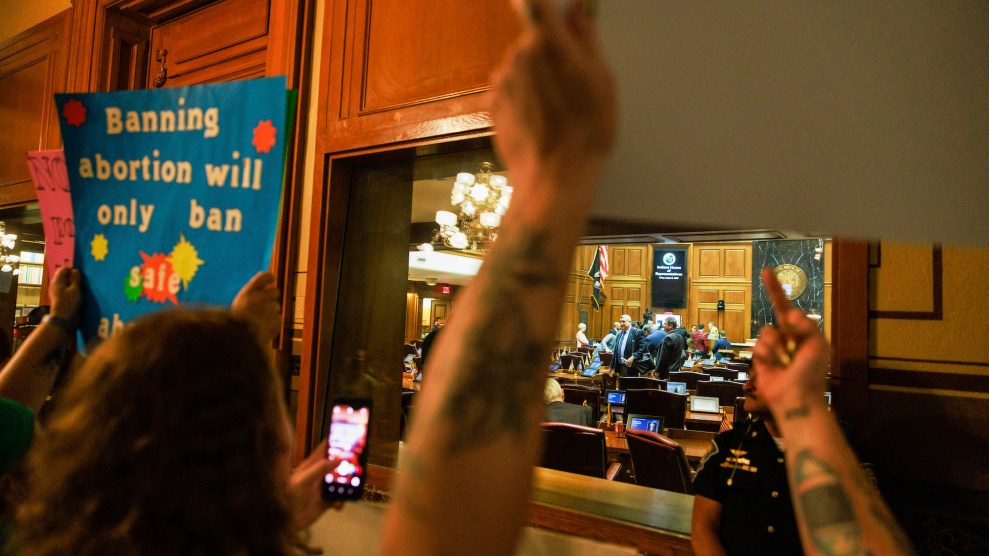 There’s an interesting Republican power grab playing out amid the fight over abortion in Indiana.

Last Friday, Republican Gov. Eric Holcomb signed a zero-week abortion bill during a special legislative session. Indiana’s new law is the first state abortion ban passed since the Supreme Court overturned Roe v. Wade on June 24.(Other bans that have gone into effect over the last couple of months were either passed before Roe or enacted as the result of “trigger laws” designed to take effect once Roe had fallen.) The bill’s few exceptions—for rape, incest, fatal fetal abnormalities, and the mother’s life and health—are so closely circumscribed by labyrinthine requirements that it’s hard to imagine them working for any real patients in need.

This passage of the law has set up a battle. In Marion County, home to about 14 percent of Indiana’s population, prosecuting attorney Ryan Mears signed a letter the day after the Supreme Court’s decision overturning Roe promising not to prosecute those who “seek, provide, or support” an abortion. “We do not need to criminalize women and our medical professionals who would not otherwise be involved in the criminal justice system,” Mears, a Democrat, said in a statement that day. “The Prosecutor’s Office will continue to use its limited resources on addressing violent crime and those that threaten the safety of the public at large.”

Mears’ vow to not purse criminal abortion cases raised the possibility that Marion County, where Indianapolis is located, might become a safe zone for people to end their pregnancies regardless of state law. Or, at least, that’s what right-wingers are afraid of. As I reported last month, decisions by elected prosecutors around the country not to enforce criminal abortion laws may not mean much for preserving access to pregnancy-ending medications and procedures, given the various other axes hanging over healthcare providers’ heads if they break state laws: the loss of a medical license, jail time if a future prosecutor adopts a different policy, and potential civil penalties, to name just a few.

Indiana’s law—which takes effect September 15—was watered down ever so slightly from the version that passed the Senate last month. It allows abortion not only to save a pregnant person’s life, but also to prevent “permanent impairment” of their physical health. It also eliminates a requirement that appeared in the Senate version, that would have forced rape or incest survivors to sign an affidavit attesting to what happened to them in order to get an abortion—potentially opening them up to legal penalties if someone claimed they lied. (“We don’t want people using the excuse, ‘Oh I was raped,'” the bill’s main sponsor, Republican state Senator Sue Glick of LaGrange told a reporter in late July.)

Now, here’s where things get interesting: The old, Senate version of the abortion bill would have given the state AG authority to prosecute “any violation of a criminal law” if a county prosecutor declines to enforce that law as a “blanket” policy. Such language has implications far beyond abortion: Prosecutors routinely set priorities for their department, using their broad discretion to decline charging crimes such as jaywalking. Earlier this spring, Indiana Republicans tried and failed to pass a standalone bill granting the attorney general the power to override such decisions; it was seen to be targeting Mears, who last year announced he would decline to charge people for low-level marijuana possession—a crime he said had been used disproportionately against African Americans in his county.

While Indiana’s final version of the abortion law scrapped the provision giving all that extra power to the state attorney general, it instead created a task force to study situations in which prosecutors decline to prosecute blanket categories of crime. By December, the task force—made up of politicians and leaders in the state’s legal community—is expected to recommend ways to circumvent prosecutors who decriminalize certain offenses.

The effort to override prosecutors’ authority isn’t limited to Indiana. In Florida, Republican Gov. Ron DeSantis suspended Tampa’s elected prosecutor, Democrat Andrew Warren, for “neglect of duty” after he signed the same letter as Mears, promising not to enforce criminal abortion laws. As I reported last month, other states have already taken action to this effect:

In some states, attorneys general can swoop in and file charges of their own if doing so is in the “public interest,” if another state official requests it, or if the local prosecutor has refused to enforce the law, according to an Emory Law Journal analysis. And legislatures that are angry about a “rogue” prosecutor are already experimenting with laws to sideline them. Such is the case for Nashville’s Glenn Funk, who joined the recent abortion letter. Last year, Funk said he would not enforce two new state laws—one that criminalized businessowners who failed to post a transphobic sign outside their bathrooms, and another that made it illegal for teachers to require students to mask up. A few months later, lawmakers passed a bill allowing court-appointed, temporary prosecutors to step in for any DA who made a blanket statement against prosecuting certain crimes.

These laws are part of the backlash against progressive prosecutors, who typically try to fight mass incarceration in their counties by bringing fewer low-level charges and focusing resources on the most serious crimes. But they also represent an effort to consolidate power in red-state legislatures by stripping authority from other elected officials who might dare to defy an ever more extreme Republican party line.

As more states pursue these efforts, especially in places where abortion is outlawed, it’s worth looking closer at which people Republican lawmakers aim to criminalize.