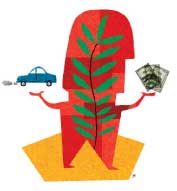 today was a good, green day. I rode my bike to the post office, a dentist appointment, and a lunch meeting. In doing so, I eliminated 4.3 miles of car travel that, according to the NativeEnergy carbon calculator, would have spewed four pounds of CO² into the environment. Oh, that everyone could be as climate-conscious as me.

Sadly, the sentiment was short-lived. Eager to see how my model lifestyle compared to that of lesser beings, I took the Earth Day Network’s online ecological footprint quiz. Turns out, my footprint is 16 percent heavier than the average American’s (excessive air travel cancels out quite a few bike trips, apparently). The quiz’s stinging conclusion: “If everyone lived like you, we would need 6.2 planets.”

Humbled and mildly indignant, I did what any American consumer would do: looked to buy my way out of the problem. Enter carbon offsets, the handy mechanism that allows us to convert our units of personal carbon emissions into dollars for wind farms, reforestation projects, and other conscience-cleansing pursuits. The theory is that such investments cancel out the environmental harm we do by burning gasoline and living in warm, gadget-laden homes.

Because air travel is my biggest vice, I started by plugging a year’s worth of flights into various online travel calculators. The cost of redemption for 34,000 air miles: $168, according to NativeEnergy; $160.89 per MyClimate; or $64.95 on TerraPass. When I added up my total carbon footprint (air travel, auto, and home energy), the price tags ranged from $180 to $408 per year. Why would anyone spend $408 when she could choose a $180 offset instead?

“As a tendency, the cheaper the program, the more likely it is that the quality is not very good,” says Wolfgang Strasdas, who recently completed a study on carbon offsets for the International Ecotourism Society. Strasdas judged carbon-offset companies on three main factors: how credible they are, how they spend your money, and how they calculate emissions. The latter accounts for the major discrepancies in price, especially regarding air travel.

The U.N.’s Intergovernmental Panel on Climate Change (ipcc) says that the greenhouse effect of an airplane burning fuel at a high elevation is 2.7 times that of the actual emissions. Some scientists have placed that number as high as 5.8; others deem the issue too complex to factor. As a rule of thumb, Strasdas says, a program that calculates air-travel emissions according to the ipcc standard should sell offsets that add about 10 to 20 percent to the cost of an economy ticket. The other piece of the pricing picture is that companies charge different rates for each ton of carbon they offset. A recent Tufts Climate Initiative study of 13 carbon-offset companies found prices ranging from $5.50 to $27.40 per ton of carbon. It did not, however, find a definitive link between low price and low quality.

Which brings us to the offsets themselves. When I buy carbon credits toward a wind plant or a methane farm, what exactly am I getting? How do I know that the dollars I designate for, say, a Sumatran hydraulic power station will eliminate the promised amount of greenhouse gas? To provide some accountability, most of the offset companies use third-party certification such as Gold Standard, which has strict guidelines for projects in developing countries; the Center for Resource Solutions is launching the Green-e program to do the same for U.S. projects. The certifying agencies evaluate offset projects on factors such as “additionality” (whether the greenhouse-gas reduction would happen anyway) and “double counting” (more than one stakeholder takes credit for the same project). But they don’t weigh in on which type of offset is best. Carbonfund offers me a choice of renewables, energy efficiency, or reforestation projects. At NativeEnergy, I can opt for a wind program, a project that converts cow manure into methane-generated electricity, or a 50-50 blend. And Atmosfair has an experimental program that produces electricity from the methane emitted by Brazilian garbage. Other companies have offset portfolios with a mix of energy and forest projects in the United States and abroad. Is a dairy farm methane project in Pennsylvania somehow better than a wind farm in Madagascar?

Nope, says the Tufts report, which supports any reputable renewable-energy and energy-efficiency project. Land use and forestry projects, however, get a less enthusiastic review. Reforestation has long been popular among consumers, but the environmental payoff is relatively low, the study found. “If the whole thing burns down 10 years after having planted those trees,” Strasdas explains, “it’s all gone. The effect is zero.” Investing in energy efficiency projects and renewable energies is a better choice, he says. That way, “you’re tackling the problem at its source.”

Still, there’s a bigger issue here. The whole idea of atonement by credit card seems counterintuitive. It’s as if we’re saying polluting is okay, as long as you can afford to pay. But Strasdas says we should think of it as a last resort. Yes, we should all strive to emit less carbon, but some emissions are harder to avoid (“You cannot have planes that are flying on renewable energy, at least not in the foreseeable future,” he points out). That’s where offsets can help. “This is not the way out. This is a temporary relief of pressure on the earth’s atmosphere,” Strasdas says. “For the time being I think it’s a very good way to bridge the gap.”

So I’ll buy my offsets—a blend of methane and wind, perhaps, with a smattering of solar. I’ll also consolidate some airplane trips, shop locally, keep riding my bike, and lower the thermostat, all in the hope that one day my environmental sins can be contained in a single planet, not 6.2.