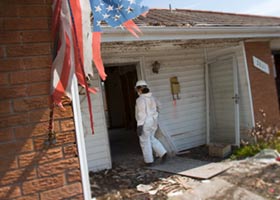 Eroding coastline, sinking land, rising seas; failing levees, poor evacuation planning; a city that would fill like a soup bowl if its flood defenses were breached. In 2002, Pulitzer Prize-winning reporter John McQuaid coauthored a series in the New Orleans Times-Picayune, where he’d worked for more than 20 years, that predicted the fate that would befall New Orleans 3 years later. Now, in a three-part series for Mother Jones, McQuaid reports that the initial surge of attention to strengthening the Gulf Coast’s defenses has ebbed, once again, to complacency. And residents of the Gulf Coast are not the only ones who should be worried. As McQuaid reports, it’s not just the levees that are broken—it’s the entire political system by which we create disaster defenses. Climate change will bring more storms, floods, fires, and tornadoes, but Washington has done very little to get us prepared. In part one of “Storm Warning,” McQuaid visits a New Orleans landfill that is ground zero for understanding what we haven’t learned from Katrina.
—The Editors

Recently, I hiked to the top of a hurricane levee along the Gulf Intracoastal Waterway, a shipping channel running through the east side of New Orleans. During Hurricane Katrina, this spot had been hard hit: Easterly winds drove the hurricane storm surge straight down the canal into the center of the city, overflowing levees and floodwalls all the way. Some washed out. Some breached. In the end, the neighborhoods they shielded were mostly destroyed.

Guided by local lawyer Joel Waltzer, we walked about 50 yards, then turned and looked north, the water at our backs. In front of us was an enormous mound of construction debris, about 60 feet high and a football field long, covered with thick, gray-brown clay. Trucks rolled through a FEMA checkpoint on the far side and then up to the top of the mountain. There, attended by bulldozers and scoopers, they dumped their cargo, the remains of the New Orleans that used to be: the Sheetrock, wood, concrete, wire, plastic, and steel that once composed the city’s wrecked buildings, which are still being torn down or gutted. Like many spots in New Orleans, the dump, called the Old Gentilly Landfill, is grimy and workaday on the one hand, elegiac on the other. “I’m thinking about how many homes are in there,” Waltzer told me. “Mine’s in there somewhere. I never did find it. I used to trudge up to the top of this son of a bitch and look.”

The view was troubling for another reason: It doesn’t take a geotechnical engineer to see that piling billions of pounds of debris next to a hurricane levee will affect its stability, which depends on a complex, poorly understood interplay between the extreme pressures of rising floodwaters and the cohesion of the squishy Mississippi delta soils. Miscalculate and your wall will breach. And even if the levee itself holds, a flood that overtops it will wash over the landfill, sending the remains of the city coursing through the streets—again.

When residents of nearby neighborhoods raised these questions in the months after the storm, the state dismissed their concerns at first. The agency that built the levee, the U.S. Army Corps of Engineers, was in the best position to gauge the safety issues, but it stayed out of the dispute—technically, it turns levees over to local authorities after construction is complete. Frustrated residents—members of a nearby Vietnamese community, among the few damaged neighborhoods to return in force—hired Waltzer to represent them in their attempts to shut down Old Gentilly and another nearby landfill. Robert Bea, an engineering professor at the University of California-Berkeley who had participated in a comprehensive review of the Katrina levee failures, volunteered to analyze the levee-dump relationship on behalf of the residents. He concluded that as the pile of debris grew, it would indeed cause mounting instability. The Corps still had ultimate responsibility for levee safety, so it agreed to upgrade the dump’s safety standards—though not enough, in the view of Bea or the residents, who have continued to use every bureaucratic route available to try to close the dump.

The details of this fight won’t be shocking news to anyone who has paid attention to the city’s slog over the past two years; the entire reconstruction effort has been plagued by similar bureaucratic snarls and disputes. Basic safety—that is, what New Orleans needs more than anything else to survive—seems to have gotten lost amid the infighting between agencies of the city, state, and federal governments, and the myriad contractors doing the work. The unreliable political interests and bureaucracies that set the stage for the disaster are still in place, mostly unchanged, and now charged with planning for the city’s future.

Catastrophes are supposed to nudge history in new directions. After the 1927 Mississippi River flood engulfed vast areas of the south, the Corps overhauled the river’s basic flood-control architecture, building the foundation of the modern system we have now. Katrina’s devastating blow to New Orleans raised some history-making issues: Can the damaged city be sustained—that is, can it survive not just the next few hurricane seasons, but the next 100? And as global climate change causes sea levels to rise and possibly fuels larger hurricanes, will other cities inevitably go under too? (See “A Hundred Katrinas: Climate Change and the Threat to the U.S. Coast.”)

Instead of addressing those questions, though, the national debate has stressed the idiosyncrasies of New Orleans. Some have written that French explorer Bienville made a mistake when, in 1718, he founded New Orleans on the fringe of a low-lying swamp dangerously close to Hurricane Alley. Others take it a step further and say that three centuries has been a good run, but it’s time to give up. There’s some truth to these statements—New Orleans’ location on a low-lying, sinking river delta has indeed put it in a terrible predicament. But the underlying message is that Katrina was a fluke: that New Orleans’ problems are unique and its existential concerns mostly irrelevant to the rest of the country. That may be comforting to people outside Louisiana. But it’s not realistic.

Thanks to centuries of man-made alterations to its fragile topography—levee construction, oil and gas drilling, suburbanization—New Orleans has become a place where environmental changes are accelerated, amped up. Year to year, sometimes day to day, the shape of the land is changing, and the life it supports is ever more exposed to danger, hurricanes being only the most dire on a long list of environmental threats. New Orleans and environs are a kind of petri dish for global climate change—what’s happening there will be showing up elsewhere sooner than you think.

The rest of the nation already has plenty in common with New Orleans. For decades, government agencies at all levels have subsidized development in risky areas. Along coastlines and in river plains, this arrived in the form of flood defenses, federal flood insurance, and aid for businesses (in Louisiana, for example, oil and gas drilling and refining). Near fire-prone forestlands, road building and the marketability of nature itself drove construction of subdivisions. Katrina exposed this ad hoc approach as both lethal and unsustainable. The current wrangling over New Orleans is a preview of what will happen over the coming decades. As melting polar ice is projected to encroach on more and more coastal communities, larger hurricanes and powerful rainstorms will send floods rolling over outmoded flood defenses, and heat waves and ecological disruptions may make some now-comfortable locales unlivable. We don’t yet have any idea how, or where, we’ll draw the last lines of defense. As post-Katrina New Orleans is proving, it’s not simply a matter of building levees; far more important is constructing the basic political architecture to decide who will be protected, and how.

Tomorrow, in part two of “Storm Warning,” John McQuaid explores what the Dutch can teach us about protecting our coastline.