Click here to read this article as it originally appeared.

Get used to it: real estate falling into the sea. And not just beach houses and seaside time-shares. Think towns and cities. These images of Shishmaref village on Alaska’s remote west coast reveal the tip of a terrain melting so fast it will carry whole cultures away with it—rich and poor, polluters and nonpolluters, all vulnerable to the great leveler, the ocean. You think South Pacific island nations and remote Arctic outposts will be the only victims? Wrong. Because no matter what we do on the carbon emissions front in the coming decades, the world ocean is forecast to warm and rise for the next millennium or more. Pictures like these will soon be commonplace.

In Shishmaref, calamity has already arrived. The village of 600 Inupiaq lies on the fragile barrier island of Sarichef, where sea ice forms later each year, exposing the land to autumn storms that carve away 50 feet or more of shoreline a season. Two houses have slipped into the sea; 18 others have been moved back from the encroaching ocean; others buckle from the melting permafrost. Ten million dollars has been spent on seawalls, to no avail. Residents have concluded permanent resettlement is their only option. But considering America has yet to seriously tackle New Orleans’ sea-level problems, no one on this distant edge of the Chukchi Sea imagines the $180 million needed to relocate Shishmaref will be easy to come by. And Shishmaref is not alone. A 2004 Government Accountability Office report found that of Alaska’s 213 Native villages, 184 are battling floods and erosion, while another assessment foresees that in the coming decades, Alaska will require $6.1 billion to repair global warming’s domino effect of fallen bridges, burst sewer pipes, and disintegrating roads. Worldwide, the situation is more dire, more expensive: Oxfam suggests the United States owes $22 billion, or 44 percent—our polluting share—of the $50 billion needed each year for poor nations to adapt to climate change. 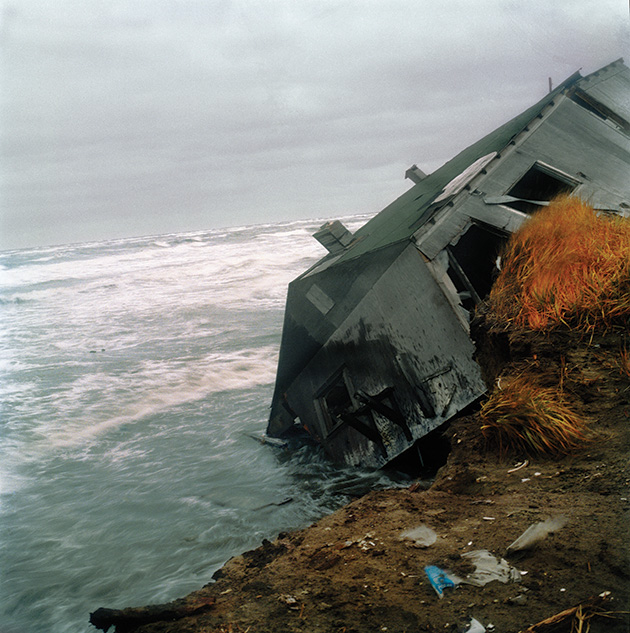 One of the houses that have disappeared into the sea. 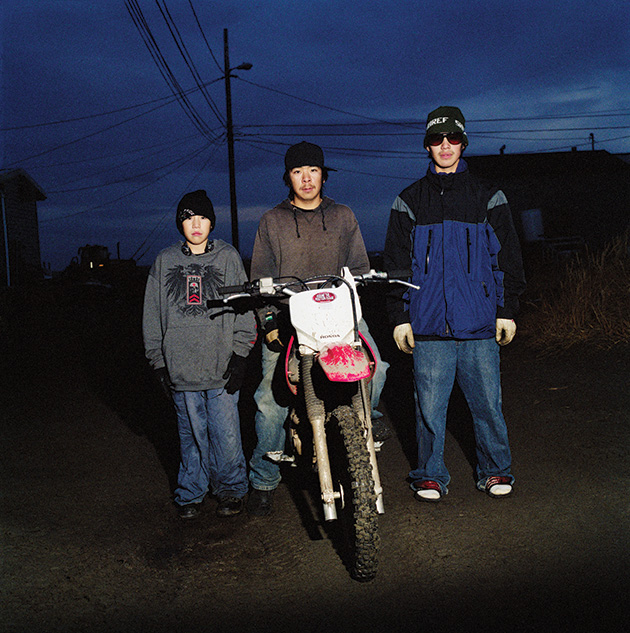 With each generation further removed from its roots, these boys—out riding past curfew—may soon lose that link to the past. But the problems aren’t Alaskans’ alone. Where are your ancestors buried? How far above sea level is your house? Got a boat? 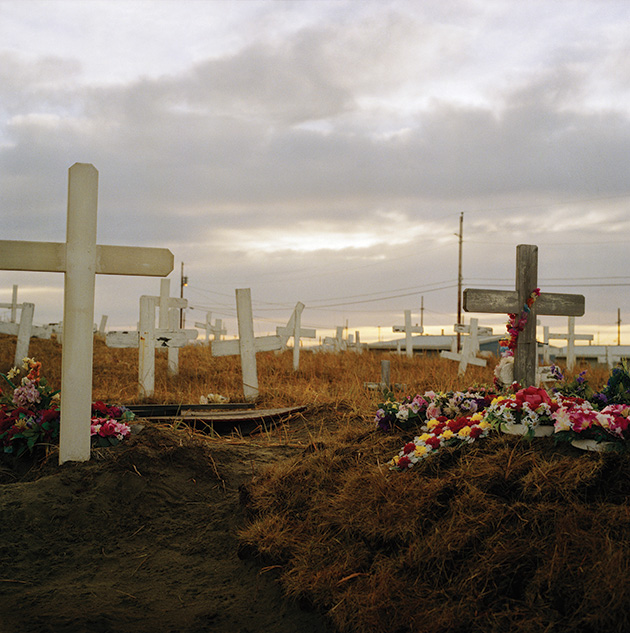 Warming temperatures increase both the costs and the risks of continuing a traditional lifestyle. Native communities increasingly report that hunters in pursuit of seals and polar bears are falling to their deaths through thinning ice. Villagers wonder what will become of their 100-year-old cemetery if Shishmaref relocates. 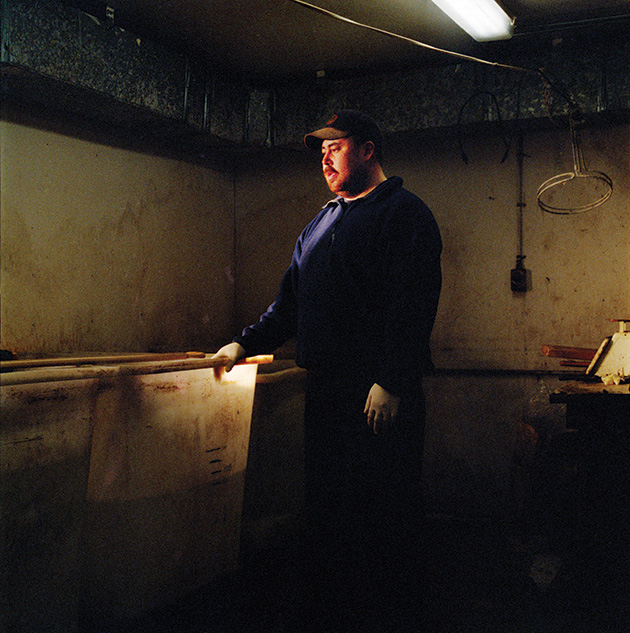 Dennis Sinnok prepares the hides of seal, moose, and beaver in Shishmaref’s Native cooperative tannery. But changing weather patterns affect animal migrations. Two-thirds of northern Alaska’s pregnant polar bears are already forced to den on land rather than their preferred sea ice, raising doubts about the future of the species and the people who live in concert with it. 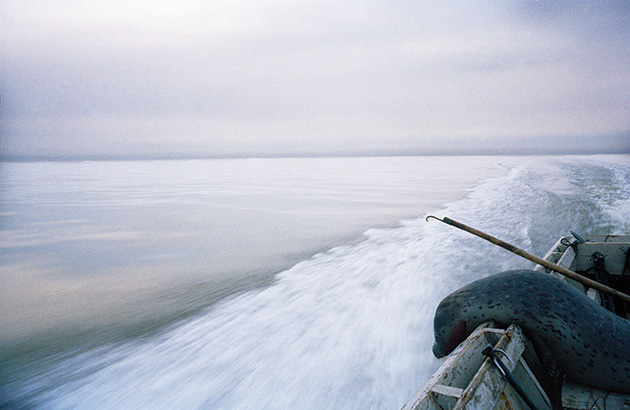 Johnny Weyiouanna out hunting for spotted seals on the Chukchi Sea. 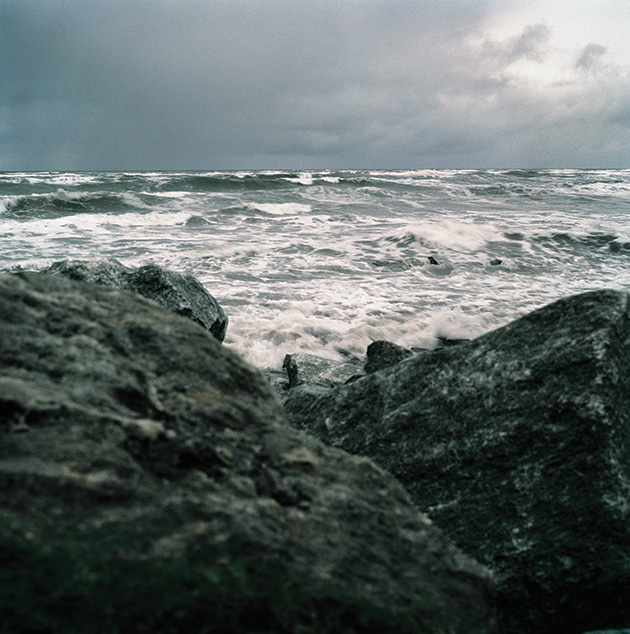 A dam has been built by the Army Corps to protect Shishmaref from the high seas. October storms have become more frequent and violent due to the rise of temperature in the Arctic. In the past the ice would protect the island against the waves which now eat away Shishmaref 6 to 15 meters per year. These days there is no ice until the end of December. 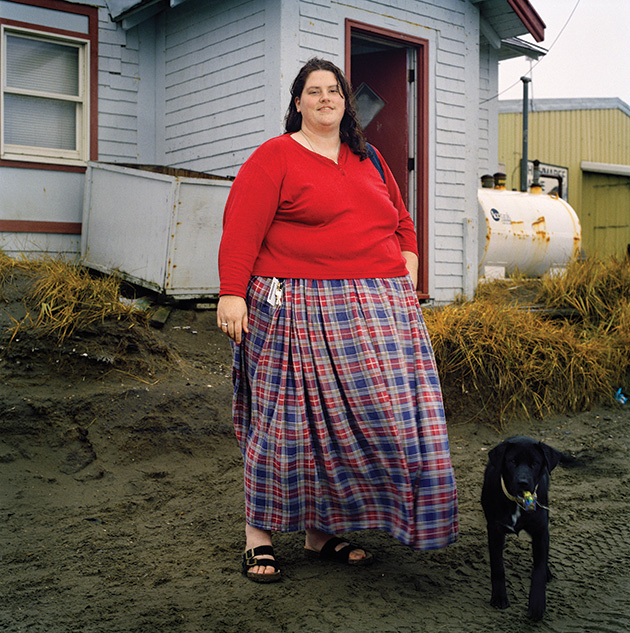 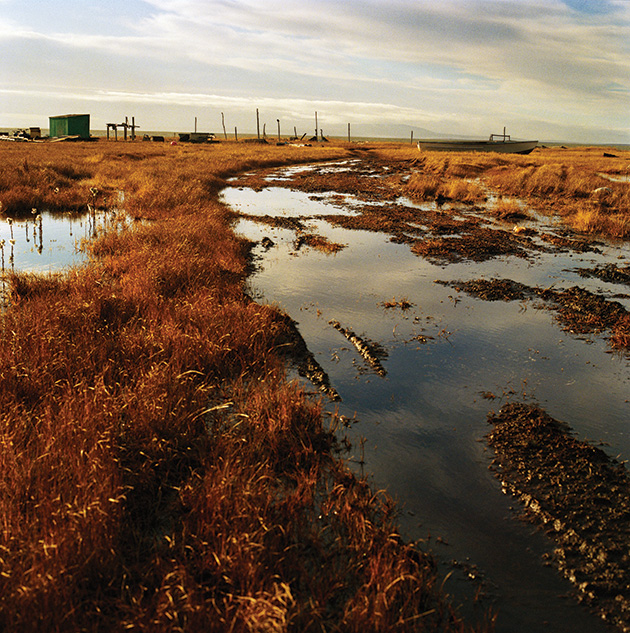 Two-thirds of ALaska is covered by permafrost that, once thawed, becomes a bog virtually impassable by sled, foot or boat.