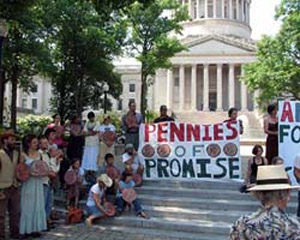 Deep into Coal River Valley, a remote region of hollows in West
Virginia’s Raleigh County, the children of Marsh Fork Elementary attend
school less than a quarter mile below a dam that holds back billions of
gallons of toxic coal mine sludge—about 2.8 billion, depending on the
season and the rains. At first, no one was alarmed when the dam began
to leak a few years ago. Coal mining is such an all-consuming part of
these hills that its dangers are almost generally accepted as a fact of
life.

But in April 2004, when Ed Wiley
picked up his granddaughter, Kayla, from school, he noticed that the
recurring red splotches on her face and neck were worse than ever, and
that the spunky fourth-grader seemed listless.

“Possum, buddy, you okay?” he recalls asking her. “Tears were running down her face. And she said, ‘Gramps, these coal mines are making us sick.'”

A self-described redneck—he’s a 10th-generation Appalachian whose
father was a trapper—Wiley cuts a distinctive figure with his slightly
hunched gait, bulbous eyes, and camouflage baseball cap. Like most
everyone else in the region, he’d spent most of his life working for
the coal companies. But after that talk with Kayla, and doubting the
school nurse’s diagnosis that she had asthma, he started asking
questions. He grew worried that arsenic, chromium, lead, manganese, and
other carcinogens from the coal slurry might leak into water from the
school’s drinking fountains or the stream that runs by the schoolyard.
Then an independent study of the air inside the school showed the
children were likely breathing fine dust from the coal silo and other
mining facilities only a few hundred yards away. A follow-up “visual”
survey in August 2006 by the Environmental Protection Agency (in which
no water or air samples were collected) confirmed that coal dust was
present at the school, but said that no studies were available to
determine the health risks.

That’s when Wiley started
looking into Marsh Fork, the dam he himself had helped build for the
coal companies starting in 2000, a massive pile of rocks and soil
across the valley. A similar dam at Buffalo Creek in nearby Logan
County had burst suddenly one morning in 1972, killing 125 people,
mostly women and children in their homes. If the Marsh Fork dam were to
give way during school hours, Kayla and her classmates could drown
within seconds.

A few Marsh Fork parents keep their children
at home on days of heavy rain, fearing a dam collapse. Otherwise, Wiley
says, the isolated community had been doing its best to ignore the
potential catastrophe. “All the guys in the valley work for Massey,” he
says. “They like to walk around in their blue uniforms with red stripes
and never take them off. They’s all young guns, who say if we complain
about the coal company, the company’s going to leave us.”

Haunted
by what he’d learned, Wiley went to the local board of education and
asked them to move the school. When that didn’t work, he started
gathering pennies from neighbors and friends—”Pennies of Promise,” he
called them—hoping to shame officials into taking action. In the summer
of 2006 he marched for 40 days, alone, to the governor’s mansion in
Charleston, carrying a flag with a picture of Marsh Fork embroidered on
it and a bag with $400 in pennies as seed money for a new school. A
local news crew followed him as, with Kayla at his side, he confronted
Gov. Joe Manchin, who promised to look into the issue and was quickly
whisked away by aides.

Since then, Wiley has staged a hunger
strike to temporarily stop construction of a second coal silo next to
the elementary school, picketed the Today Show in New York, and
been hauled off to jail for protesting outside the governor’s office.
“I’ve lost a few friends around here,” he says. “But I’ve made some new
ones” —young environmentalists, who consider him an inspiration.

Meanwhile,
Massey subsidiaries are still planning to build a second coal silo
right next to the school. And there seems little enthusiasm to move
Marsh Fork, or to study the safety issue, from Manchin, who has
followed through on promises to make West Virginia even more coal
friendly.

Calls to Manchin’s office were returned by his
general counsel, Carte Goodwin, who said, “If there is a need and a
justification for the closing of Marsh Fork Elementary and relocating
it…that is an analysis and a decision that needs to be made by the
residents of Raleigh County.” Indignant, Raleigh County Board of
Education president Rick Snuffer responded that, while he supported
moving the school, it was unfair to ask one of the nation’s poorest
counties to pay for a situation created by one of its wealthiest
industries. “The problem isn’t the school,” he said. “The problem is
the coal mines, which came in after the school was there. Massey and
the state of West Virginia created this mess, and they want to pass the
buck to us.”

Wiley says his campaign will continue; Kayla
has graduated to middle school, but he has two grandchildren old enough
to start kindergarten at Marsh Fork in the next few years. “I wake up
every morning worrying about what could happen to all those kids up
there.”

If he ever succeeds, Wiley says, his next campaign
will be to protect wildlife endangered by strip-mining and mountaintop
removal. “My eyes have been opened to a lot of things,” he says. “I’ve
started down a whole new road in my life.”