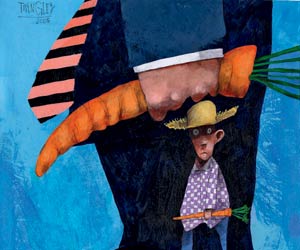 every saturday morning, I get up early to beat the crowds at the Ferry Plaza Farmers Market in San Francisco. The nearby Bay Bridge soars above the shimmering blue water, and the rising sun breaks warm and bright over the Oakland hills. By 7:30 a.m., most of the vendors are ready for action and we early shoppers are practically stalking them, standing in wait near our favorite farmers, looking for the go-ahead nod. Dirty Girl Produce, Star Route Farms, Frog Hollow Farm Legendary Fruits, Swanton Berry Farm—some of the most famous purveyors in California sell direct here, a foodie’s fantasy come true. And by 8:30, when I’m usually grabbing a last basket of mushrooms and beating a retreat, the crowd has become unbearably swollen with post-jog couples buying scrambled eggs from prepared-food vendors, and tourists snapping up dried lavender and flavored honeys.

You couldn’t ask for a better vision of contemporary gourmet culture at its most successful: healthy people buying healthy food from happy farmers who care for the earth. But there’s always trouble in paradise, and the Ferry Plaza Farmers Market version—representative, according to farmers, of the trouble spreading quietly through the nationwide network of these markets—has to do with a gulf between appearance and reality. I first took notice in 2006, when Andy Griffin of Mariquita Farm, which supplies some of San Francisco’s top restaurants, suddenly pulled out of the market. At this star-studded venue, Griffin was a standout, his stall often so crowded you couldn’t elbow your way to the heirloom tomatoes. Surely he was getting rich, right? But a letter he posted on the Internet suggested otherwise: For the past few years, he wrote, his gross receipts had actually been falling. “The market has changed,” Griffin said. “Many farms have changed with it by turning their attention towards providing value added products like juices, preserves, herbal salts, and snacks that can be eaten out of hand…We’ve changed at Mariquita Farm too, by focusing on serving the restaurant trade to make up for lost retail sales. I figure that if I can’t sell fresh vegetables to diners and tourists, then I’ll sell my vegetables to the chefs that cook for them.”

Recently, my favorite farmers made a similar decision. Brandon and Michelle Ross of Ella Bella Farm had arguably the most devoted and affectionate clientele at the Ferry Plaza. But over time, I’d noticed in Brandon a rising frustration with the market demographics. I don’t want to put words in his mouth, so let’s say this is how I interpreted our conversations: The booming market crowds, while fun and all, simply were not translating into greater produce sales for him and the core farmers giving the place its legitimacy. Farmers were, rather, the lure, the carnival monkeys, and to make any real money you had to sling jars of chutney. And Brandon and Michelle did begin to sling chutney, but they got sick of it. So they were starting over on the Big Island of Hawaii.

What’s In An Apostrophe?

Who reads more nuance into punctuation rules than copy editors? Food activists! In the California law that has regulated farmers markets since 1977, the term contains a possessive apostrophe. Market managers who maintain the apostrophe believe it indicates that “farmers’ markets” exist “for farmers and by farmers,” says John Silveira, director of the Pacific Coast Farmers’ Market Association, hastily adding he doesn’t intend to besmirch those who have dropped it. Another naming convention allows farmers’s market…farmers market…whatever…consumers to buy breakfast or lunch as they buy their produce. Though the Cali law limits “Certified Farmers’ Market” vendors to farmers who grow all their own wares, vendors of prepared goods (who can use food from Costco or Wal-Mart) are permitted to sell at a nominally separate (but physically adjacent) market. Got it? —Alexis Fitts

Here’s the underlying problem: In 1994, there were 1,755 farmers markets in the United States; by 2008, there were 4,685. In the big scheme of things, this is terrific news; it means Americans are learning to feed themselves properly. But not all parts of the country have seen commensurate explosions in the number of small-scale local organic farmers. And the driving force in opening a farmers market is less often the organic revolution than it is economic revitalization, maybe a local chamber of commerce hoping to tempt people back to Main Street on weekends. When either is true, that chamber of commerce might take the path of least resistance and give the market contract to one of many farmers market associations populated by commercial growers, who then dominate the booth space. Nothing wrong on the face of this, except that, lured by funky folding tables in a parking lot, the consumer ends up going out of his way to buy produce he could get, probably cheaper, at any supermarket. (In Oakland, some small farmers quit a market when they discovered other produce vendors doing just that.) Many market managers have their hearts in the right place, and do want to support local, sustainable agriculture. Perhaps they also know that without some cute local farmers, the market ain’t gonna fly. But what if you’re managing one of these markets, and the chamber complains that you’re not bringing enough people downtown? Well, hey, okay, maybe it’s time to bring in more entertainment—street performers, guys who can tie balloons into poodles. Maybe you reach out to some restaurants, too, asking them to set up burrito booths. They aren’t required to use produce from local farmers—but you can charge them a lot more for a booth, which helps the bottom line. And now Saturday mornings are really jamming, crowds are gathering for the coffee and the banjo player, and some of your core vendors guess accurately that a lot of these folks are more interested in scented candles than in cauliflower. So they gradually switch their product mix, and that, in turn, encourages still more scented-candle buyers.

The pressure to grow the overall market causes other subtle changes. Consumers don’t want to make multiple shopping stops, so market managers strive to offer a diversity of products. Let’s say your market doesn’t have an asparagus vendor, and the managers are looking at two candidates: a huge outfit that sells asparagus to supermarkets and puts up booths at 50 farmers markets every week, and a local family farm practicing the kind of sustainable agriculture everyone wants to support. But that small farmer can’t make his nut on asparagus alone. To turn a profit at your market, he’ll have to be able to sell tomatoes, too. The managers know that their other tomato farmers don’t want more competition. So they go with the big outfit and hope the customers don’t notice that they’ve just paid top dollar for the same asparagus found at Safeway. “These markets are a fucking hayride—they aren’t real,” says a prominent Northern California organic farmer who prefers not to be identified. “They don’t offer a real market opportunity for real farmers, but the public would rather be deceived because it’s too complicated.”

If that sounds too harsh, here’s a softer way of putting it: If you just like buying vegetables off folding tables on the weekends, and don’t care where or how they were grown, you shouldn’t trouble your head with any of this. Same if the lure of your local market is mostly the coffee cart and the street performers. But if you shop at the farmers market in part to vote with your food dollars—for a stronger local economy, say, and for better stewardship of the land, and for a food network that lets you know exactly what you’re putting in your mouth—and if you’d prefer not to feel like a dupe, it turns out that going to the farmers market isn’t enough anymore. Now you actually have to find out exactly who’s behind every folding table, how their business is really doing, and accept the disappointment the answers are bound to bring. But isn’t that what a farmers market is supposed to be about—caring about how and where and by whom your food was grown?