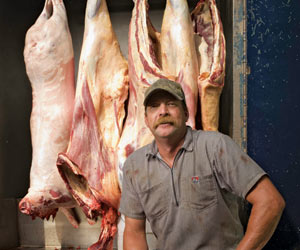 “here, piggy piggy,” calls the man peering through the early-morning fog into a livestock trailer, a .22-caliber rifle in his hands. It is 7 a.m. in farm country outside Santa Rosa, California. A rooster crows. “Here we go. Right here.”

He raises the rifle to his shoulder and takes aim. BAM! There’s a thud, and a few excited squeals from the remaining pigs behind the bars. Carefully, the man sets down the gun and steps into the trailer. He emerges dragging a small, dead—but still twitching—reddish pig with a bullet hole the diameter of a pencil eraser just about perfectly centered in its forehead.

Meet John Taylor, or “One Shot Johnny,” as his customers call him. His business card offers just “JT’s Custom Slaughtering” and his cell phone number, along with clip art of a cow, pig, sheep, and lamb. But then, he doesn’t really need a card. Just about everyone in California north of San Francisco who raises animals for meat knows the tall “ranch butcher” with the bristly mustache and straight-arrow demeanor of a frontier sheriff. Now 43, he began sweeping floors in his family’s butcher shop (since sold) in third grade, and started helping his uncle in the pasture not long after. “I was doomed—I knew this was what I was meant to do,” he says.

Taylor ties on a black rubber apron that hangs past the tops of his rubber boots and chains a knife holder around his waist. He sticks a hook through the animal’s lower jaw and attaches it to a winch mounted on his truck. Twenty minutes of expert scraping, shaving, and eviscerating later, the pig has become pork.

The trailer belongs to Brock Fulmer, of Black Sheep Farm near Potter Valley, California, who’s hauled three swine 90 minutes south from his farm and paid $50 per head to have them slaughtered on this dead-end road outside a friend’s property. Fulmer could have paid just $20 per head at a usda-inspected facility two hours’ drive east of his farm, but that would have required booking a slot at least a month ago. And the customer who bought these pigs for a barbecue didn’t think that far ahead.

Marksmanship is important, but so is legal savvy, since a single misstep could land Taylor in hot water. By California law, he can slaughter livestock only for a farmer’s personal use or for a farmer’s customer who buys the animal alive and whole; in the latter case, he has to do so off farm premises. And under federal law, every carcass Taylor delivers to a butcher shop for cutting—and every piece from it—must be stamped “Not for Sale.” Only meat from usda-inspected slaughterhouses can be sold across state lines or on a retail basis (including at farmers markets and restaurants) in the 25 states without their own inspection systems, like California and New York. Taylor has something of a “don’t ask, don’t tell” policy with his farmers—if Taylor knew his clients were going to sell the meat he shot and officials found out, he could be liable for any food-borne illnesses, for example.

Such rules are partly why federally inspected slaughterhouses kill 98 percent of all cattle and 99 percent of hogs in this country. But as giants like Tyson and Smithfield Foods—which have their own abattoirs—have increasingly dominated the meat industry, the number of usda-approved slaughterhouses nationwide has fallen, from 1,405 in 1992 to just 808 in 2008. (Wyoming doesn’t have a single one.) In 2007, just 14 plants killed 18.5 million cattle, more than half the country’s total; that’s a per-slaughterhouse average of 2.5 head per minute, 24-7. These big operations “are not talking to the little guy, the farmer who says, ‘I have 500 head of beef‘”—let alone 50 or 5, says Bruce Dunlop, who raises lamb and pork on Lopez Island in Washington state. “They laugh at him.” Nor is the little guy excited to take his animals to the plant, considering the very real possibility that they will be mistreated (see the 2007 scandal involving workers at a Chino, California, facility who sprayed water up the noses of lame cattle to get them to walk to slaughter, as required by law, and moved those that couldn’t walk by forklift), or that their meat will be caught in the net of a massive E. coli-driven recall.

In desperation, farmers are going into the abattoir business themselves. In 2002, Dunlop, who worked as an engineer before raising sheep, headed a group of farmers who funded, designed, and built a usda-approved mobile slaughterhouse unit that now serves Washington state’s four northwest counties. A 34-foot trailer with a cooler and a water system, it dispatches up to 10 cattle a day, four days a week. Dunlop has sold six similar units for about $175,000 each to ranchers around the country. Joel Salatin, whose Polyface farm starred in Michael Pollan’s The Omnivore’s Dilemma, is thinking bigger: In July, with a partner, he bought a small usda-inspected slaughterhouse in Harrisonburg, Virginia.

But smaller slaughterhouses are struggling mightily to stay in business. The initial investment is steep and the payoff slow if you’re not processing thousands of head each day. It takes a minimum of $2 million to build a new plant or even overhaul an old one, says Mike Lorentz, who built a 30-head-a-day facility in 1999 in Cannon Falls, Minnesota. “We lost a million dollars in the first three years. I am like a cancer survivor—exhilarated that I survived, but I wouldn’t wish it on anyone.”

So into the breach steps One Shot Johnny. Booked solid six days a week, he hasn’t taken a sick day in more than seven years, since he impaled his hand skinning a lamb. Small farms in Northern California are raising ever more animals, but all the area’s ranch butchers have retired; Taylor recently trained one other man, but he kills only a few days a week for a small number of clients. “Sure, my back hurts a lot,” Taylor says. “But what am I going to do, cancel on people? This is their livelihood at stake.”