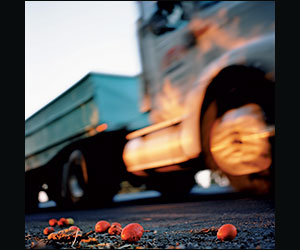 Is organic and local so 2008? Here’s how MoJo contributing writer Paul Roberts answered that in “Spoiled“:

When most of us imagine what a sustainable food economy might look like, chances are we picture a variation on something that already exists—such as organic farming, or a network of local farms and farmers markets, or urban pea patches—only on a much larger scale. The future of food, in other words, will be built from ideas and models that are familiar, relatively simple, and easily distilled into a buying decision: Look for the right label, and you’re done.

But that’s not the reality. Many of the familiar models don’t work well on the scale required to feed billions of people. Or they focus too narrowly on one issue (salad greens that are organic but picked by exploited workers). Or they work only in limited circumstances. (A $4 heirloom tomato is hardly going to save the world.)

“Spoiled” touched such a nerve among readers that we’ve brought Paul Roberts back to answer your questions this week—and added an ag trade wonk, an organic consumer lobbyist, and a professional foodie to the mix.

They’ll be checking in on this MoJo Forum page to discuss food security with readers—and each other. Want to talk to Paul Roberts, Lisa Gosselin, Jim Harkness, and Ryan Zinn about the future of food? Now’s your chance. Leave a comment below for our MoJo Food Forum moderators this week and they’ll respond.

Lisa Gosselin is the publisher of the award-winning EatingWell magazine and the former editor-in-chief of Audubon magazine. Her most recent project is EatingWell in Season: The Farmers’ Market Cookbook:

I could not agree more with Roberts’ comments on our food system, and agree that we need to consider the life-cycle impacts of food production, not just be content with the feel-good labels of “organic” and “local.”

Rather than think that that any one system on its own—local, organic, vegan, you name it—is the solution, we need to keep asking questions, looking for answers, and eating more vegetables. That’s the healthiest thing we can do for ourselves and our planet.

Jim Harkness is president of the Institute for Agriculture and Trade Policy. He has served as an adviser for the World Bank and the United Nations Food and Agriculture Organization, and is a contributor to two recent books: Mandate for Change and Thinking Big:

Organic and local as designer labels may be an elitist passing fancy, but as principles for building a fair and sustainable food system they are essential. Yes, in a consumer society even good ideas get appropriated and commodified. (“The revolution is just a T-shirt away!”) But this is more useful as a wry observation about the ironies of anti-systemic movements than as a thesis for analyzing the problems of the food system. The use or misuse of organic and local is not The Problem, and I have never met a food activist or farmer who thought $4 heirloom tomatoes would save the world. The Problem is corporate agriculture supported by market fundamentalist ideology, and although Roberts raises some important issues he takes too much of that carefully constructed conventional wisdom for granted.

Instead of helping a farmer who’s been snubbed by his organic neighbors to feel better about using Roundup, we should focus on understanding and changing the system that makes using deadly chemicals seem like his cheapest, easiest option.

“Is organic and local so 2008?” More like organic and local is so 2018! While Roberts’ attempt at deconstructing and demystifying “organic” and “local” is both admirable and needed, building a truly sustainable food system is infinitely more complex, yet increasingly attainable. Roberts’ analysis represents a pre-2008 mentality, one that does not reflect emerging partnerships between workers and consumers to build a sustainable supply chain, the boom of modern urban homesteading, and the institutional changes at virtually every level of government. In fact, the current economic crisis and looming environmental calamities have forced our nation to finally reflect and act on “what’s for dinner?”