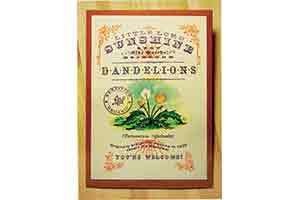 NOT TOO LONG AGO I took a bag of lettuce seeds as my date to a party. The seeds were of a variety called Speckles, a crispy, chartreuse-green plant marked with splashes of red. I was drawn to Speckles because of its backstory: For centuries, it has been grown in Austria, where it is known as Forellenschluss (which refers to its distinctive troutlike splotches). At first, it didn’t do so well on my small urban farm. But four years later, it’s thriving, consistently producing massive heads of lettuce well into the fall. Now Speckles and I have a bond. And so, as a reward, I’d decided to pass on its genetic line.

The party we attended was a “pirate seed swap” in an epic bachelor pad in San Francisco’s Mission district. The pirate theme referred to the seeds many of us had brought along: heirloom, open-source seeds that hadn’t been created by agribusiness, free to be planted, preserved, and shared as seeds have been for millennia. As more than 50 young gardeners milled around, feasting on roast boar, pirate chief Heather Flores set up a long table where we’d trade our botanical booty. Dressed in a jaunty fedora, a form-fitting black dress, and vintage Mary Janes, Flores unpacked a small suitcase, revealing labeled vials of seeds, and set out copies of her book, Food Not Lawns, in which she warns that “seeds have become another form of capital—to be owned, manipulated, and profited from, rather than stewarded and shared for the benefit of all.”

Oddly, it has become unusual, even subversive, to grow fruits and vegetables with the straightforward method that humankind has used since the dawn of agriculture: A plant grows, its seeds are collected and sown, another plant grows, ad infinitum. Yet the majority of the commercial and household seeds sold today are F1 hybrids, crosses of different varieties created by seed companies. Big commercial growers use hybrids because they grow like weeds and are easily harvested and processed by machine. But unlike heirlooms, hybrids can’t reliably replicate themselves. The seeds of a hybrid sweet orange tomato, for example, might grow into a bitter red tomato. Only the seed companies can make more F1 hybrid seed—whose exact origins are usually trade secrets—so farmers have to buy more every year, instead of simply storing and planting their favorites for years, decades, or generations.

The shift to hybrids has come at the expense of agricultural diversity. A century ago, there were 15,000 kinds of apples in America; now there are 1,500. Among the varieties that have disappeared for good are 96 percent of corn, 95 percent of cabbages, and 81 percent of tomatoes. Today, four giant suppliers (Monsanto, Syngenta, Limagrain, and DuPont/Pioneer Hi-Bred) control more than half the seed market. Because these companies engineer seeds for uniformity, the gene pool has shrunk considerably. This means pests or disease can easily wipe out a crop, leaving no backup variety. Plus, hybrid plants’ lack of adaptability may make them more susceptible to the impacts of climate change.

Yet after decades of being forgotten or plowed under, heirlooms (also known as open-pollinated seeds) have made a comeback. Diane Ott Whealy, cofounder of Seed Savers Exchange, an Iowa nonprofit that has dispensed more than 1 million seeds in its 34-year history, says she’s seen a tremendous increase in business. “One doesn’t like to brag,” she reports, “but this past year was the best ever—we were up more than 50 percent.” Several recent books, including Flores’, extol the heirloom renaissance. In Heirloom Beans, farmer Steve Sando touts the superior flavor of antique legumes like the Good Mother Stallard over boring supermarket beans. Renewing America’s Food Traditions, a branch of Slow Food USA, has published a self-titled compendium of traditional recipes that use rare heirlooms such as Osage Red flint corn, Sibley squash, and the Santo Domingo casaba melon. In her foreword to the book, vegetarian cuisine guru Deborah Madison muses, “Could it be that backward is the new forward in the food world?”

I started planting heirlooms in part because I loved their names: Country Gentleman sweet corn. Aunt Molly’s tomatillos. Cream of Saskatchewan watermelons. These were like name brands—folksy, antique brands that I hoped would transport me back to a simpler time. I also expected that my heirloom tomatoes, soft skinned and delicate, and antique watermelons, all perfume and juice, would taste better than their mass-market cousins.

However, I’ve come to realize that even though these old-timey varieties have survived the hybrid invasion, they aren’t always the best performers. My Country Gentleman corn, for instance, was starchy and hard, not sweet and luscious like a hybrid such as Honey & Cream. Growing heirlooms is a rejection of quick and easy uniformity, and that means the occasional failure. But I sometimes wonder if some heirloom seeds are being saved simply for saving’s sake.

When I confessed my doubts to Flores, she was reassuring. “People get attached to these heirloom varieties,” she said. “But if they plant them year after year with poor results, that is just foolish.” She said that if I selected seeds from my best performers, they might eventually adjust to my garden‘s soil conditions and climate, just as Speckles had done.

At the party, a short, older man named Tree approached the seed-swap table. He had some seeds from his purple orach, a tall-growing spinach relative that, he boasted, had both taste and dazzling color. Curious, I poured some of his papery seeds into a jar, and in return, he took some of my lettuce seeds. Like a worried parent, I told him it might take a few sowings before Speckles got the hang of his San Francisco microclimate. Tree nodded, perhaps worried about his orach’s new home, too. As he wandered off, I suddenly did feel like a pirate—a pirate with another piece of treasure to bury.