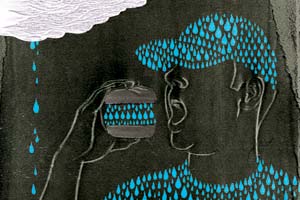 ON THE EDGE of Jim Diedrich’s 1,500-acre almond and tomato farm is a rustic office where his son would normally be sitting in front of a flat screen, controlling a superefficient drip irrigation network. But he’ll have some more time on his hands this summer. California is in the midst of its most severe drought in nearly 20 years. And to make things worse, two years ago a federal judge ruled that pumps in the Sacramento-San Joaquin Delta were killing off the threatened delta smelt. And so Diedrich’s farm outside the Central Valley town of Firebaugh is receiving almost no irrigation water this year. Sitting in his office, commiserating with a neighboring farmer, he griped, “It’s unbelievable the power of the goddamn wacko environmentalists.”

Then his neighbor, Shawn Coburn, turned toward me and demanded if I knew how much water it took to grow one almond, a cantaloupe, or a pound of tomato paste. (I didn’t. Turns out it’s 1 gallon, 25 gallons, and 55 gallons, respectively.) “The people in the city, they don’t know what their footprint on nature is,” he scoffed. “They sit there in an ivory tower and don’t realize what it takes to keep them alive.”

Even in thirsty California, where the battle lines between the big rural irrigation districts and urban water utilities were drawn long ago, this was a new angle on an old argument. The farmers’ complaint underscores a curious, often unexamined aspect of our relationship with water: Even as the greenest among us cut our showers short and let our toilets go yellow, we may be blissfully unaware that our household water use accounts for only 6 percent of the water that we consume. The other 94 percent comes from the products we buy, everything from almonds and tomatoes to blue jeans and microchips. (See “Big Gulp.”) The average person in the developed world drinks a gallon of water each day but “eats” another 800 gallons. And as Americans, our water consumption per capita is twice the world’s average. Each one of us uses enough water annually to fill an Olympic-size swimming pool—four times what someone in Yemen uses.

In an effort to get consumers, companies, and entire countries to recognize the true costs of their water use, a few environmental groups are promoting the concept of our “water footprint.” The idea “very much brings the water problem to the people,” explains its creator, Arjen Hoekstra, scientific director of the Netherlands-based Water Footprint Network. Just as calculating carbon footprints has encouraged—and shocked—many Americans into seriously considering their personal environmental impacts, Hoekstra hopes that water footprinting will reveal the gushing faucet behind every purchase we make. “And then it shows that maybe people can do something about it.”

We’ve got a long way to go. In the past 50 years, the world’s water use has tripled. More than a third of the western United States sits atop groundwater that is being consumed faster than it’s replenished. Half of the world’s wetlands are gone, killed off in part by irrigation and dams, which have destroyed habitats along 60 percent of the planet’s largest river systems. Since 1970, the population of freshwater species has been halved; one-fifth of all freshwater fish vanished in the past century—an extinction rate nearly 50 times that of mammals. And consuming more water has concentrated pesticides and fertilizers in what’s left over: It’s unsafe to swim or fish in nearly 40 percent of US rivers and streams, and polluted water sickens nearly 3.5 million Americans a year.

Farmers often get blamed for these water woes. Take California, where agriculture uses 80 percent of the state’s water. According to the Pacific Institute, better conservation on farms in the semiarid Central Valley could save 1.1 trillion gallons of water a year. That’s almost enough to supply all nonfarm uses in Nevada, Arizona, and Colorado. But adopting efficient technologies like drip irrigation systems and computerized moisture sensors is too expensive for many farmers, whose profits depend on shoppers with no sense of a vegetable’s water footprint but a keen eye for a penny’s difference in price. The federal government sends mixed signals on conservation: The estimated $263 million the farm bill annually spends to get farmers to save water is dwarfed by the roughly $5 billion it hands out for growing water-intensive crops like rice, soybeans, and cotton, often in parched regions like Arizona. All of which conspires to keep water flowing freely and cheaply without regard for scarcity or impact.

To put an end to these perverse incentives, the Alliance for Water Stewardship, a partnership between a water industry trade group and five environmental organizations, including the Pacific Institute and the Nature Conservancy, wants to reward farmers who minimize their water footprints. By 2012, AWS aims to begin certifying businesses as “water stewards” and possibly introduce a “blue” ecolabel that would identify water-friendly products on grocery store shelves.

Devising this label is a lot trickier than coming up with a feel-good logo. A field of cotton in Alabama and one in California can use the same amount of water but have very different environmental impacts; cotton is more sustainable in the humid South than in the arid West. “We often say everything about water is ultimately local,” says Brian Richter, a water scientist at the Nature Conservancy’s freshwater program. That’s why the alliance’s footprint certifiers will use a formula that balances the size of a farm’s water footprint with its efficiency and impact on its watershed. Yet deciding exactly how that formula should work will take years of research and debate. “Water is not like carbon, which has impacts that are fairly evenly distributed around the globe,” Richter says. “You have to approach water stewardship in a fundamentally different way.”

Water footprinting has already caught the attention of some large, PR-savvy corporations. In the past two years, 50 companies, including Coca-Cola and Levi Strauss, have signed on to the United Nations CEO Water Mandate, making a loose commitment to cut their water use and encourage their suppliers and customers to do the same. Last year, Unilever, the Dutch and British conglomerate that buys 7 percent of the world’s tomatoes, announced that in making its Ragú pasta sauce it would favor California tomatoes grown by farmers who use efficient drip irrigation systems. “We’re highly reliant on water as a source material,” explains John Temple, the company’s sustainability director. “If we don’t have a handle on water availability, we might not have the business in the future.”

In April, the Finnish food conglomerate Raisio became the first company of its kind to print a product’s water footprint on its packaging. In the absence of an internationally accepted footprint formula, it had to devise its own. Spokeswoman Heidi Hirvonen says the move was in response to “an increasing consumer demand” for this kind of data. Yet other large food companies and some members of the Alliance for Water Stewardship argue that consumers won’t fully understand a water-footprint label, let alone a more sophisticated “blue” label that factors in how and where water is used. “It’s very hard to find the words to make it clear enough for people to understand,” explains Stuart Orr, the World Wildlife Fund’s representative at the alliance. He thinks the campaign should focus on showing companies how they can minimize their exposure to water scarcity by creating a “bluer” supply chain.

Water footprinting may also clash with some tenets of the sustainability movement. Locally grown, organic, or fair-trade food might seem less appetizing if consumers knew it was grown using water from fragile salmon habitat or a depleted aquifer. “For some of those people who are heavily involved in the food-miles issue, the water issue throws a complete curveball,” Orr notes. “Should we rely on countries that have a lot of water and allow them to trade that through foodstuffs?” In other words, could it be better for a shopper in Los Angeles to buy an avocado from water-rich New Zealand than from Southern California’s irrigated desert? (See “Liquid Assets.”)

The answers to such questions hold promise and peril for farmers such as Jim Diedrich. The Alliance for Water Stewardship plan could deem the entire Sacramento River watershed unsuitable for use in irrigated agriculture, or it could embrace farmers like him who’ve invested heavily in conserving water.

For now, however, he doesn’t feel like he’s part of the solution. On a recent afternoon, he climbed into his Dodge Laramie with his golden retriever, Joey, and drove through his fallowed fields. He passed a jumble of blue pipes, part of his $20 million drip irrigation system, which uses a third of the water of his old furrow system. “We paid more for that drip system than we paid for the goddamn ground,” he grumbled. It didn’t seem fair that he’d been cut off from his carefully allotted supply while nearby farmers with grandfathered water claims were still flooding their fields. “We’re trying to be the most efficient as we can, and now we get no water.”

If the water sustainability movement can navigate through the tangle of existing water rights, it might lay the groundwork for an entirely different approach to regulating agriculture. Water could be parceled out to the farmers who use it most efficiently and with the least environmental impact. Much as a cap-and-trade program would make manufacturers compete for the right to spew CO2, farms could compete through efficiency for the right to suck up water.

California’s unending cycles of drought might ultimately compel it to adopt a footprint-based solution. Under such an arrangement, says Jason Morrison, program director for the Pacific Institute, farmers who are the most responsible irrigators could be guaranteed subsidies or interest-free loans by the state—and maybe even water—during drought years. This approach, combined with the launch of a blue ecolabel, would create a profitable incentive for farmers to save water. It could even forge a truce between conventional farmers and the “environmental wackos” who have been their traditional foes. Diedrich, for one, told me he liked the notion of getting a loan during dry years in exchange for reducing his—and, by extension, my and everyone else’s—water footprint. “That would probably be a good deal,” he said. “You wouldn’t have to take a welfare check, either.”