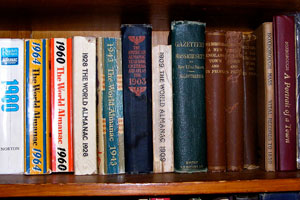 It’s eight days to our global climate day of action and I’m just headed back from Nashville, where I spoke to the annual meeting of the National Trust for Historic Preservation. I feel like one of those candidates on the eve of the election, scrambling across the landscape to make sure they leave no vote ungot. But truth be told, I don’t really know what I’m doing.

I’m an author turned part-time activist. Not out of desire—my bumper sticker should read “I’d rather be writing”—but out of frustration, and the sense that no one was really building a popular movement about climate change, and that it needed to be done. In this quest I’ve worked with a crew of young people, all recent college grads, and we’ve learned side by side about how to organize. Learned by experience, because there’s really no guidebook (so we wrote one last year, Fight Global Warming Now).

One of the things we’ve learned: Look for allies in unlikely places. Global warming can’t be a fight dominated by the environmental organizations. They’re simply not big enough—they’re scaled to defend the Arctic National Wildlife Refuge, not take on ExxonMobil. So as we’ve built 350.org, we’ve focused hard on finding friends elsewhere—across the developing world, for example, in the kind of places that have never had a say in this question. The result: The day of action on October 24 will be the most widespread day of environmental activism ever, and quite possibly the most farflung day of action about any political issue the planet has ever seen. We’re closing in on 170 countries. Practically the only ones left are incredibly small (San Marino) or incredibly impossible (North Korea).

Does it matter that, say, every country in Latin America is engaged, given that few of them will play a huge role at the Copenhagen conference? It does, I think—what we’re trying to build is a global consensus about the science, trying to make 350 the most well-known number in the world. Consensus counts—it influences the options that the big players can credibly choose from.

But it’s not just geographic spread we’re looking for, which explains why I went onstage at the Ryman Auditorium and talked to historic preservationists. We need to grasp that everything is threatened by climate change. Not just nature preserves, not just ski areas, not just poor people who depend on glaciers for their water. But everything we take for granted about the world.

Take history. The Scots just published a list of 10,000 historic sites, dating back to the Neolithic, that may disappear as the oceans rise. A one foot rise in sea level, and the Washington Mall could flood regularly.

But it goes deeper than that. Our sense of the people who came before us derives in part from the fact that we share the same world. The historic buildings of New England have steep roofs because they needed to shed snow—in a world without snow we’d never be able to feel the deep connection to their world. We won’t be able to farm in the places we used to farm, or fish in the places we used to fish—even if we survive, we’ll be moored on a new, presumably artificial, island with no real link to the past. By the same token, our feeling for the world that came before can be leveraged to save the present. I went to Nashville to ask these folks to make sure that on Oct. 24 their historic properties take some part in this huge worldwide affair. All around the world people are using historic places as backdrops: the pyramids, say, or (this just in) the ruins of the Hanging Gardens of Babylon in Iraq.

We are trying to reach people through what they care about: Their love of the outdoors (athletes); their love of God (the World Council of Churches has signed on, asking congregations to ring their bells 350 times); their love of social justice (Christian Aid and Oxfam are on board); their love of history. Global warming touches everyone, and everything. That’s the one thing I have learned.

This article is part of our Assignment 2020 project, a long-term reporting effort on the most important story of our time.