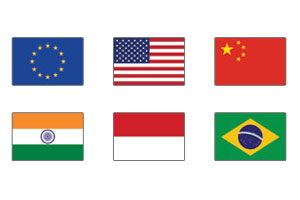 THE EUROPEANS Their populations have strong environmental leanings, and since World War II they’ve kept oil prices high so their economies and lifestyles aren’t nearly as dependent on fossil fuel as ours. (Copenhagen is now the most bike-friendly city on the planet, and Denmark generates 20 percent of its power from windmills.) It was Europe that kept the Kyoto treaty alive, winning its ratification even after the US pulled out. Still, they’re hardly environmental angels: Much of the continent has had trouble meeting Kyoto targets. Now they’re pushing for a middle-of-the-road agreement that could hold us to carbon concentrations of less than 450 parts per million (we’re at 387 now) and temperature increases of less than two degrees Celsius.

THE AMERICANS There’s finally a climate bill working its way through Congress, but its painfully slow progress demonstrates America’s trouble in addressing the causes of climate change—even liberal congressmen race to the cameras to demand an investigation whenever we get a jump in the price of gas. And our biggest corporate players stand to lose the most from a real solution: ExxonMobil made more money each of the last three years than any company in the history of money. Now add in coal, and Big Ag, which accounts for a huge percentage of American emissions. You begin to understand why it’s hard to find 60 votes in the Senate—or 67, to ratify an international treaty. (This in a political climate where leading Republican thinkers continue to insist climate change is a hoax.) Obama has signed on to the 450 parts per million consensus, but he’s also left himself plenty of wiggle room: “Let’s not make perfect the enemy of the essential.”

CHINA Obama dispatched his climate team to Beijing several times this past summer, and the Europeans are now actually worried that the two behemoths will reach a weak agreement and cram it down everyone’s throats. That would at least be an improvement on the last eight years, when the US and China used each other’s recalcitrance as the excuse to do nothing at all, but even a weak agreement will be tough to reach. China passed the US as the largest carbon emitter in 2006, but it has four times as many people, and more important most of the CO2 now warming the planet came from the West. If the Chinese agree to caps, it will only be if the rich nations hand over technology and resources. China began the bidding last fall, suggesting that 1 percent of the developed world’s annual GDP would be a good price for helping the developing world build windmills instead of coal plants. They’ve come down a little—the latest demand was only .7 percent, or around $295 billion. But that’s still a hard sell in a Congress that is currently threatening “carbon tariffs” if other countries don’t cut emissions to its satisfaction.

Still, the betting is that China will eventually make some kind of deal. For one thing, the party hierarchy is heavy with engineers, who understand the value of the West’s expertise in green energy design. For another, they’re autocrats, so they don’t worry so much about the next election.

INDIA Ever since independence, India has made development its consensus-rallying cry. Now that its economy is finally taking off (complete with cheap cars and budget airlines), it’s going to be harder than ever to take the foot off the gas. Secretary of State Clinton visited Mumbai in July, with climate negotiator Todd Stern in tow—and the Indian papers expressed shock and dismay that he’d come along. One reporter offered that one-half of 1 percent of developed countries’ GDP didn’t seem too much to help poor countries deal with climate change. Not realistic, said Stern, pointing out that that would amount to $75 billion for the US. (Almost as much as bailing out a good-size investment bank.) So the Indians haven’t promised much—at the moment their pledge is that their per-capita emissions will never be as large as America’s. Which is a good thing, since right now they’re one-fourteenth ours. But it’s not going to be much help in Copenhagen.

THE RAINFOREST COUNTRIES Brazil and Indonesia don’t burn all that much fossil fuel, but do burn a lot of forest, and in the process have become major emitters. They’d like some cash, too—in return they’re willing to keep most of that forest intact. The good news: This part of the negotiations, which goes by the moniker REDD (for Reducing Emissions From Deforestation and Forest Degradation), is actually going a little better than the rest, mostly because the West realizes protecting trees is relatively cheap.

Australia: Now the world’s biggest coal exporter
Canada: Has turned the tar sands of Alberta into a veritable global warming machine
Japan: Helped broker the Kyoto accord out of a sense of host obligation, but seems less enthusiastic this time around
The Gulf states: Have lots of oil—but also lots of natural gas, which would become a more valuable semiclean “bridge fuel” as we move off coal