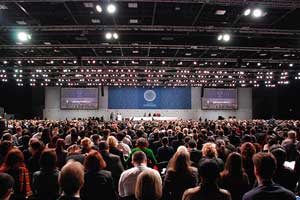 As Bolivian President Evo Morales was thundering in the press briefing room of the Copenhagen climate summit on Wednesday—railing about the “guilt of the countries of the North” and denouncing President Barack Obama for spending more on the war in Afghanistan than on climate change programs for the developing world—Senator John Kerry (D-Mass.) was 100 yards away in a crowded room, delivering a somewhat similar message. Industrialized nations began global-warming pollution, Kerry said, so they now have a responsibility to “ramp up significantly” climate financing for poorer nations as part of a final deal. The South American populist and the North American senator essentially agreed.

But as the conference approached a deal-or-no-deal moment, it seemed that the United States was not yet prepared to place any “ramp up” on the table. For days, members of the US delegation, speaking on the condition of anonymity, had been saying that the Obama administration had no intention of announcing any concrete pledges for long-term climate funding. And in a background briefing for reporters, White House officials also asserted that the administration would only discuss short-term financing at Copenhagen.

Then came Hillary. On Thursday morning, moments after the African nations complained that the negotiations were going nowhere, Secretary of State Hillary Clinton appeared in a crowded press briefing room at the summit and announced that the United States would contribute to a $100 billion international fund starting in 2020—as long as “all major nations” commit their emissions reductions to a binding agreement and submit those reductions to transparent verification. And by “all major nations,” she meant China.

With this dramatic, nearly last-minute declaration, the United States changed the summit’s dynamic. For most of the two-week affair, as the poorer nations and European countries talked about setting up a global fund that would help developing nations contend with climate change, American officials were mum. Instead, they tried to change the discussion, focusing on China’s refusal to place its announced emissions limits within an international agreement and to accept monitoring and verification of its pledged emissions limits. In private, members of the US delegation acknowledged that a refusal by the United States to make a specific commitment to long-term funding could be perceived as the conference’s deal-killer. Preparing for a potential blame-game, one US official remarked to me (as if he were test-driving an argument), would environmentalists really want to allow the world’s largest emitters to simply claim reductions without proof? Aren’t verifiable reductions as important as climate finance?

So had it looked as if the United States and China were not moving any closer, even as the showy part of the proceedings began with a long parade of speechifying heads of state. (Please, no more than three minutes, the conference organizers entreated each one.) The grandstanding from Venezuelan President Hugo Chavez, Zimbabwean President Robert Mugabe, and others meant little, as exhausted-looking negotiators and ministers continued talks. It just added another ring to the Copenhagen circus.

With the proceedings stalled, European Commission President Jose Manuel Barroso asserted that financing remained a crucial sticking point. But the Americans kept focusing on China. Even as he cited the need for a global fund, Kerry insisted that this economic powerhouse make its proposal to slow the growth of its emissions part of an internationally binding accord and subject its emissions management to outside verification. In fact, he was suggesting a grand quid pro quo: money (from the US, Europe and Japan) in exchange for accountability (from China). Hours later, Japan entered the fray, announcing that it would contribute $11 billion in short-term funds on the condition that any agreement creates a framework covering all major emitters—as in China, India, Brazil and other emerging developing nations. The message to China: you play, we’ll pay. (Japan’s offer was a billion dollars more than what the European Union has proposed, and more than double the $4.2 billion the United States has suggested it would contribute to short-term financing.)

The Chinese, though, have not seemed to be in a yielding mood. At a press conference on Wednesday, I asked China’s chief climate negotiator Su Wei if it were possible for China and the United States to reach an accommodation on the verification issue. He responded with a long—a very long—answer. He started by accusing developed nations of trying to “evade their historic responsibilities with various excuses [and] the fundamental excuse is that [China and other emerging developing countries] have not taken steps to address climate change.” Su, however, contended that China’s energy efficiency efforts “have broken their lies.” He declared that China “always followed a principle of openness and transparency.” And then he asserted: “I don’t see the necessity of others to worry about the sincerity of China’s efforts to address climate change.” In other words, get lost. Su volunteered that China was willing to share information about its emissions efforts with the appropriate international bodies-which is hardly independent verification. Any doubts about China’s performance, he said, “can be resolved through exchanges and talks.” Well, that’s what Americans wanted to do at Copenhagen.

Hillary Clinton’s announcement placed pressure on China. There certainly are unknowns about the pledged $100 billion. She only noted it would come from public and private sources. And developing nations—including China—have suggested that this fund should be at least twice this size. But the offer was a major move. Repeatedly in her press conference, Clinton noted that the cash was conditional upon reaching an agreement in which all nations would commit to meaningful emissions curbs and monitoring. “It’s hard to imagine this level of financial commitment…without transparency,” she remarked. She added, “if there’s not a commitment to transparency, that’s a deal-breaker for us.” She was tough, accusing China of backing away from a joint US-Chinese statement released last month in which both nations pledged to apply transparency to emissions reductions efforts.

Immediately attention turned to China. For the first 11 days of the conference, the US-China standoff cast a shadow over the whole affair. Clinton declared, “No longer can it be about us-versus- them.” In a way, she was attempting to make it about them. And her announcement was clearly engineered to provide poorer nations needing these funds an incentive to lean on China and push Beijing to budge on verification. (After I informed Tuvalu Prime Minister Apisai Ielemia of the Clinton statement, he said, “I don’t want money to trade our existence….Money can be promised now and can never be fulfilled. Our people only live once.”)

There are still plenty of issues at play besides the US-China face-off—deeper emissions cuts from major emitters, a firm limit for the expected global temperature rise, the legal nature of any agreement that comes out of Copenhagen or that is forged down the road. But the tussle between the two economic powers was clogging the pipes. If the American initiative prompts any Chinese movement, there could be space for the summit to produce some sort of imperfect deal.

With heads of state have bouncing on and off the stage in the final two days, the question that remains is whether negotiators can hammer out some document that creates a foundation for negotiations to continue next year and lead to a binding accord that compels ambitious actions. Securing even that limited agreement required progress on the money-and-accountability front. The United States has goosed that process along—and, not coincidentally, placed itself in a stronger position to blame China should the summit end badly.

A resolution of the US-China scuffle won’t determine if an effective treaty emerges from the meeting. No such “instrument”—as they say in diplomatic circles—will be drafted. The most vulnerable nations—the small island states and drought-sensitive African nations—who looked to Copenhagen for decisive action will be disappointed. Clinton’s $100 billion conditional offer addressed only one obstacle to comprehensive action. Whether or not her gambit succeeds, at best, Copenhagen will be a way station, not a destination.