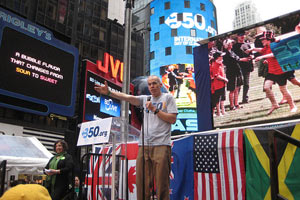 Let me vent for a moment.

I’ve spent years listening to climate skeptics gas on about how environmentalists have concocted a “global warming hoax” because they want to “jet off” to “exotic destinations” for conferences of such fabulousness that they make this whole larcenous scheme worthwhile.

In the first place, Copenhagen in December hovers just above freezing, with constant rain—it is relentlessly, hopelessly gray. The fabulous conference is in a concrete bunker on the outskirts of town where you have to go through metal detectors over and over—it’s like boarding an airplane every few hours, an airplane that never leaves the runway. And with similar food. Danish cuisine consists, at least at the various conference food stands, of myriad twists and turns on the basic concept: ham sandwich.

But that’s not the problem.

The problem is the basic charade underway here. This conference, at least at the moment, is not about “saving the climate” in any meaningful way—more and more it’s about saving the political skin of certain leaders, Barack Obama among them. So let’s begin with how his spokesman, Jonathan Pershing, described America’s commitment to progress yesterday. “It’s a vision that moves the United States down the curve of greenhouse gas emissions at a level that no other country has even begun to seriously contemplate.”

This is a lie inside a fib, and so coated with spin you can hardly begin to imagine. For one thing, some other countries have committed to emitting no carbon at all by 2020—the Maldive Islands, for instance. And the Europeans have offered to cut their emissions 20% by 2020, and pledged to increase that number to 30% if the Americans would go along. In return, Pershing’s boss, who accepted the Nobel Peace Prize by mentioning global warming in passing as a military threat, has offered a cut of 4% from 1990 levels by 2020.

But that’s not the problem.

The problem is that it doesn’t come anywhere close to doing what scientists have called necessary. His own NASA researchers have said that the world needs to return to 350 parts per million co2 in the atmosphere to have a hope of climatic stability, a target endorsed by 92 countries. Yesterday the Association of Small Island States repeated the demand for those numbers. But when you feed in the current proposals from the big emitters, including the U.S. to a computer spreadsheet, it spits out a world with 650 parts per million co2. That is, no ice, half its species gone. To use the technical term, hell.

Here’s how the various analytical teams put it in a joint statement late yesterday afternoon: to have any hope of avoiding global warming greater than 2 degrees Celsius would require “a clear commitment to go significantly above the most ambitious targets currently under discussion.”

But that’s not the problem. Because two degrees—the target that most governments and NGOS fixed on years ago—isn’t close to good enough. Here’s the marvelous Dessima Williams, a Grenadian diplomat who is leading the small islands delegation to these talks. “We have two research stations, one in the Pacific and one in the Caribbean. They both suggest a rise of 2C is completely untenable for us. Our islands are disappearing, our coral reefs are bleaching, we are losing our fish supplies. We bring empirical evidence to Copenhagen of what climate change is doing now to our states.” The spinmasters will tell you what the problem is. Pershing and his boss Todd Stern talk incessantly about how the Senate won’t go for more. Since Obama has done next to nothing to change that very real state of affairs, his team clearly thinks public opinion can’t be swung behind action significant enough to matter.

But that’s not the problem. The most interesting and optimistic thing I came across yesterday was a panel presentation from a group called World Wide Views. They convened dozens of forums across the world where representative samples of local citizens arrived to spend a day listening to “neutral experts” describing what climate scientists and economists have discovered about climate change. After a day of listening and speaking with each other, they voted on a series of propositions, including whether they thought countries should cut emissions (yes), whether they’d be willing to pay more to make it happen (yes), and what the targets should be. Just 35 percent thought that two degrees should be the target—but more than half thought we should aim for either the current level of warming (0.8 degrees) or try and return the planet’s temperature to preindustrial levels. That’s not radical, that’s sensible. If. .8 degrees is melting the Arctic, which it is, then two degrees isn’t sage, it’s stupid.

We could do it. At 350.org we’ve laid out plans for how you get emissions truly under control. And it’s not just us. The same analytic teams spitting out numbers on climate said yesterday that it would be both “technically and economically feasible” to do what needs to be done. That’s not some idealist NGO talking. That’s, among others, Nick Stern, the world’s preeminent climate economist. It would, however, require what Stern et al called “political will.” Some heavy lifting. Which, in the political Olympics, is a tougher event than spinning.

Democrats have been trying to pass a universal healthcare plan for nearly a century. But Woodrow Wilson dropped the ball on the first attempt, FDR gave up on the second, Harry Truman ran smack into the AMA on the third, Richard Nixon collided with Teddy Kennedy on the fourth, and Bill Clinton fell to Harry and Louise (and Bob and Newt) on the fifth.

Now we’re on our sixth try, and the fight so far hasn’t been a pretty one. The Republican side has been dominated by howling over death panels and socialism, transparently fake attempts at bipartisanship, and promises to filibuster and obstruct endlessly. On the Democratic side, activists have turned abortion funding and the public option into hills to die for, Olympia Snowe and Ben Nelson have become de factor kingmakers, and even at best none of the bills on offer will cover more than about two-thirds of the uninsured.

But you know what? This is still the farthest we’ve ever gotten, and with Democrats coming out of this week’s series of negotiating sessions seemingly united behind a compromise plan, it looks like Harry Reid might actually get something passed through the Senate before Christmas. If that happens, a conference committee will likely report out a final bill sometime in January. And that will be the first time ever that Congress has even gotten to the point of voting on national healthcare.

The first time. So yes: it’s not single-payer. The subsidies are inadequate. The public option, if there is one, will be so weak as to be a joke. Every interest group from insurers to doctors to seniors to pharmaceutical companies has been openly bribed to go along. Lots of people will still be left outside the safety net. It’s a mess.

But so was Social Security when it passed. It left out domestic workers (because they were mostly black and Southerners demanded it), it left out farm workers, and its payouts were pathetically small. But what it did do was establish the principle that the elderly should be taken care of. And eventually they were. The healthcare bill we’re about to get is exactly the same: it does too little and it leaves too many people out, but it establishes the principle that everyone deserves decent healthcare. And eventually everyone will.

So hold your noses and celebrate anyway. It’s taken us a hundred years, but if this messy, inadequate, infuriating healthcare reform passes it will be a historic occasion. FDR will finally be smiling.