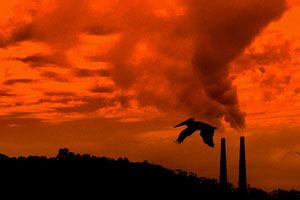 Photo used under a Creative Commons license by flickr user <a href="http://www.flickr.com/photos/naturesdawn/" target="_blank">*~Dawn~*</a>

“Calm before the storm” is how my colleague Jamie Henn described Copenhagen today. “‘Hopenhagen‘ advertising everywhere, people setting up an outdoor concert venue in downtown, a few anarchist posters wheat-pasted on signs, and I even saw a 350.dk license plate on a bicycle!”

I’m still in the United States, but packing for the trip to Denmark. This by all rights should be a charged moment, the culmination of two decades of work by scientists, negotiators, and activists—the moment when we finally decide what we’re going to do about the biggest crisis we’ve ever faced. The curtain about to rise!

The play will go on—the hall’s been rented, after all. It’s clear by now, though, that it’s likely to be not even a dress rehearsal. More like a read-through. And the script’s pretty weak—10 days ago the US made it clear that they’d lowball their offer. Obama will propose 4 percent reductions in its emissions by 2020, compared with 20 percent for the Europeans (a number the EU said they’d raise to 30 percent if the US would go along). Scientists, meanwhile, have made it clear that a serious offer would mean about 40 percent cuts by 2020. So—we’re exactly an order of magnitude shy of what the physics demands.

Meanwhile, the big emerging powers—Brazil, China, South Africa, India—have reportedly agreed on a series of demands that seem perfectly designed to keep the Congress from acting. No carbon-related tariffs, they’re insisting, knowing full well that the crucial senators from the Midwest have set that as their price for going along. This afternoon the Indians made their bid—reducing the amount of energy used per dollar of goods produced by about 20 percent, or half the Chinese goal. “The game seems to be that all countries pick a politically safe number,” Navroz Dubash, an Indian analyst with the Center for Policy Research, told the Times. “India is now joining that game. And the game started with the United States.”

And in the United States the leaders of the anti-anything-at-all bloc are pulling out every stop, insisting among other things that some shady emails from a couple of British climate researchers mean the entire science of global warming is now suspect. Maybe the glaciers are simply pretending to melt! Maybe they’ve been paid off!

It’s such a strange feeling. Civil society has largely come together. The number we’ve been talking about for two years—350 parts per million—is now mainstream science. Last weekend the patriarch of the Orthodox Church called wrecking the climate a sin and said “350 is an act of repentance.” The next day the leaders of all the world’s big zoos and aquariums demanded a 350 ppm target. The big NGOs—Oxfam, Avaaz, and so forth—will hold a giant vigil on December 12 in Copenhagen to demand, among other things, a 350 target, with figures like Desmond Tutu on the platform.

But so far it hasn’t penetrated the dense politics of the big nations. It’s as if they’ve gone to the doctor, and the doctor has said, You have cancer, and so you need six months of chemotherapy. And they’ve responded, We’ll do one week of chemotherapy. Anything more would be too hard.

We’ll keep doing our level best to educate them, with science, with art, with our bodies. What else really is there to do?