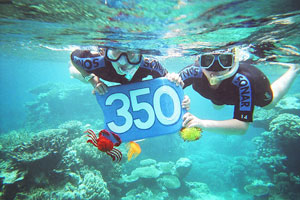 The various parties to the climate change debate have been staking out their positions over the last week. They go something like this.

The US: We’re not going to do much, and China better do a lot.

In the midst of this potential trainwreck, a moment of deep sanity arrived yesterday, when the Alliance of Small Island States, which is an association of small nations surrounded on all sides by water, and the water is rising, introduced a draft of a real treaty that would actually do something about climate change. It called for swift action to reduce carbon levels in the atmosphere to 350 ppm—which would be hard as hell to accomplish. It would require putting the planet on a wartime footing, and spending twenty years devoting most public effort to speeding the transition from fossil fuels to renewable energy. It would require diverting money from other things, like, say, military budgets. And all we’d get in return is what we already have, or used to: a working planet.

It’s such a sensible idea that it will probably be enough to unite China and the US and the other “great powers” in stamping it out—there are already hair-curling rumors of the kind of pressure and enticement being put on small nations to cave before they embarrass the carbon culprits.

But before that happens, there is one more party staking out its position that weekend, and that’s civil society. The rest of us. People.

The media will focus on the big march in Copenhagen today, which is expected to draw tens of thousands. (I spent the other night at the art warehouse that 350.org is running on the edge of town, and can predict that the parade is going to look very cool, though I can also predict that the media will focus all its attention on how many folks show up in black hoodies to fight with the police).

But the more important mobilization is going on in thousands of places around the world. A coalition of groups—Tcktcktck, Avaaz, 350, Oxfam, and so on—has been organizing candlelight vigils in every corner of the world. They’re a way for people to express their incredibly deep hopes for progress from these talks, hope that I hear in dozens and dozens of emails a day from every point of the compass. And it’s a way to send a message to the delegates here. If you’re a brave nation, we’ve got your back—Tuvalu may lack an army but for the weekend it’s got one spread out across the earth.  If you’re a “leader” that’s passing the buck, we notice. We may not be able to stop you, but we understand what’s going on, and exactly what it means.

By Monday we’ll have young people holding hundreds of images of those candlelight vigils inside the conference hall. Maybe they’ll cast a little reflected glow in the gathering gloom.