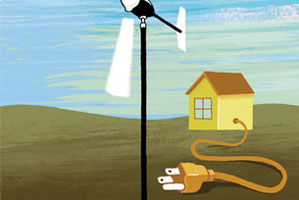 THE TWISTING TURBINES on the Columbia River Gorge ridges were one of the first things my husband and I noticed en route from Baltimore to our new house in Oregon. So a few weeks later, when a hawker at the farmers market urged me—with a $5 token for free veggies and a postcard with pictures of children lounging in front of local windmills—to sign up for a renewable energy program called Blue Sky, I didn’t hesitate. For less than an extra $10 a month, my utility, Pacific Power, would supply our home with electricity from wind turbines instead of coal.

But it turns out ditching dirty energy is more complicated than that hawker would have me believe. From the windmill postcard, you’d think my premium would go straight to local projects. Not quite: True, Pacific Power operates one wind farm in Oregon, but that’s largely because the state mandates that utilities get 25 percent of their power from renewables by 2025. My well-meaning purchase has little to do with those windmills. Instead, Pacific Power hands my Blue Sky money over to companies that buy renewable energy certificates (RECs) from wind farms, mostly in other states, and other renewable projects like methane-burning landfills. Consumers need to understand that the electricity “is not going from the windmill on the ridge to your toaster,” says Pacific Power spokesman Tom Gauntt. Michael Gillenwater, a Princeton researcher who codeveloped the EPA’s carbon emissions tracking system, says it’s more like donating to a cause. “What you are doing is subsidizing the market for renewable energy.”

Pacific Power says our premium “avoided the release of 897 pounds of carbon dioxide emissions into the air…equivalent to not driving 909 miles.” But it’s hard to verify those numbers, says Stanford professor Michael Wara, who studies carbon markets. “You don’t have an overseeing regulator ensuring that the claims made are backed up.” Green-e, a third-party certification program, ensures that my RECs come from relatively new projects and aren’t double-counted to meet state mandates. But Gillenwater says its “additionality” test isn’t thorough enough to prove I paid for an emission reduction that wouldn’t have happened anyway.

Experts say that RECs like mine can make renewable projects more profitable, but they play a much smaller role than government subsidies. (Disclosure: My father recently invested in a wood-chip-fueled electricity plant in Florida, and he said RECs sweetened that deal.) Gillenwater says most projects would have produced the energy regardless of whether consumers like me pitched in—in 2008, for example, Pacific Power bought a third of my RECs from two Puget Sound Energy wind farms built in 2005. (A spokesman says the projects’ planners didn’t count on revenue from residential RECs in their budget.) The remaining two-thirds were purchased from other projects, including a landfill-gas plant in Utah. Only 1 percent came from solar.

RECs, mandates, additionality—my head was spinning like those windmills, which were seeming further away. To make matters worse, in 2008, only 67 percent of my Blue Sky bucks purchased RECs; the remaining 33 percent was spent on staff and publicity. On average, 19 percent of green programs’ revenues go to marketing, but at small utilities that percentage is far greater.

Utilities insist that the promotion is necessary, since voluntary green power programs work better when lots of people participate. Nationwide, only about a million customers shell out for green power—with corporations, governments, and universities buying the bulk of it. In 2008, residential customers made up only one-quarter of green power purchases.

So what’s a consumer to do? Even with their problems, RECs are “one of the simplest and most direct ways to support renewable technologies,” says Jeff Deyette, a senior analyst with the Union of Concerned Scientists. Premiums can provide that extra profit margin to make renewable projects competitive with fossil fuels. And some utilities are experimenting with other models. If I had enrolled in Pacific Power’s Blue Sky Block program, for twice what I pay now, 41 percent of my money would have funded local solar arrays and a geothermal test project—and only 25 percent would have gone to overhead. Or instead, I could spend my premium on efficiency upgrades in my new home: sealing leaks, insulating, and replacing drafty windows. It would just take more time and elbow grease than checking a box.