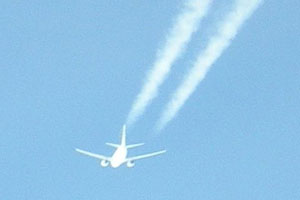 ONE LATE-WINTER evening in 2008, I opened up Google Earth, drew a 100-mile circle around my house in western Colorado, and vowed to stay within that minihabitat for a full year.

This unusual experiment began with a plane ticket. My grandmother was turning 90, and her birthday shindig was in Kansas, 750 miles away. I could jet in for two quality days and be home within 48 hours. Or I could spend two grueling days on the road. It was a no-brainer—and probably more so for me than for the average American. As the daughter of an Air Force fighter pilot, my childhood revolved around planes; Dad’s second career as an American Airlines captain made jumbo jets the equivalent of the family car. With free family passes in hand, I grew accustomed to flying wherever and whenever I liked. 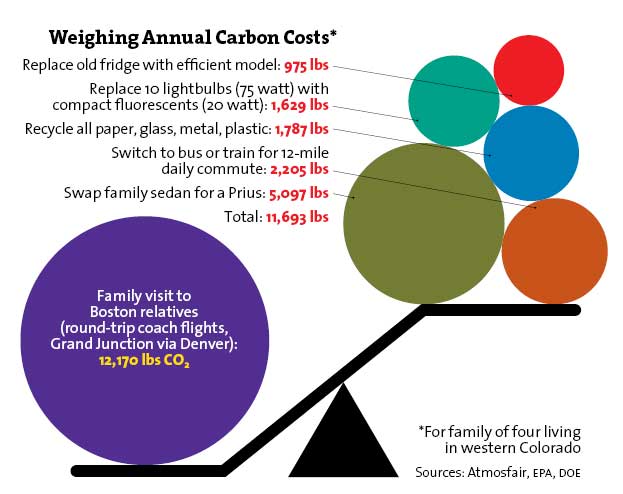 But then I stumbled across some figures that led me to question my ways. Grandma’s party left me on the hook for 1,058 pounds of carbon dioxide emissions, the equivalent of driving my fuel-efficient car 2,600 miles—almost twice the round-trip distance to Kansas. In fact, all of my green bragging rights—the recycling, the composting, the buying local, drying laundry on a clothesline—were obliterated by flying. In 2008, I took four round-trip flights, including cross-country jaunts to New York and Washington, DC. My flight-related carbon footprint dwarfed the average Indian citizen’s total annual footprint by a factor of four.

Naive as this may sound, I’d always considered flying relatively benign—there were a couple hundred people on each plane, right? In reality, airplanes not only spew far more greenhouse gases per passenger than any other mode of transport, but they do so high in the atmosphere, magnifying the ill effects.

I wasn’t alone in my denial. A recent study by Stewart Barr, a geographer at the UK’s University of Exeter, found that people who identified as committed environmentalists actually flew more than those who didn’t. Some of these “bleeding-heart jet setters” insisted they’d earned their flights through green behavior at home. “People tell themselves they can justify a flight of 5,000 miles because they’ve recycled all year,” Barr told me.

Yes, that was me in a nutshell: happy to pedal to the grocery store or buy an energy-efficient gadget, but if I had to sacrifice something important to me (like visiting Grandma, my final trip), I balked. America’s social and geographical sprawl following three decades of discount travel—thanks, People Express!—further complicates the equation. I thought my vow might provoke some guilt, or maybe even inspire a few friends to join in. What I got was a collective shrug. Love miles were nonnegotiable. Ditto pleasure trips.

My mother all but disowned me. “You can’t do that!” she screamed when I unveiled my plan. I might as well have told my parents I’d converted to Scientology. They fly nearly once a month; jetting off to international destinations makes my mom feel worldly and adventurous, traits she has prized ever since she and Dad left their tiny hometown on the Kansas plains.

But this wasn’t all about status or wanderlust. Mom and I were co-contributors to a new essay anthology, and she felt betrayed that I wouldn’t be traveling to Albuquerque for a joint signing at her local bookstore. A signing, however, wasn’t even close to making my short list of potential pledge breakers: Family death or serious illness? Of course. Best friend’s wedding? Oh, dear.

At the end of my year at home, friends congratulated me and asked where I planned to fly off to first. The answer surprised even me: nowhere. Somehow, in my absence from elsewhere, I’d laid down roots. I finally climbed that funny-shaped peak I’d long eyed from the front porch, and even bothered to check out my sleepy town museum. (Old West saloon replica!) Limited choices, it turned out, were a potent form of stress relief: I no longer agonized about whether to take this trip or that—or had to hassle with the logistics.

From 398 consecutive days in my home habitat, I concluded that a lot of my essential travel simply wasn’t. I’ve kept in touch well enough by phone and Skype, and my relationship with Mom survived the signing spat. Okay, granted, I’ll be at her next bookstore event. The point is, even love miles are sometimes negotiable: Dad recently invited me to join his cycling buddies for a tour of Germany—a most brutal temptation. Instead, I arranged to meet him for a ride in Albuquerque, where it’s mostly sunny, and the beer is always served cold.