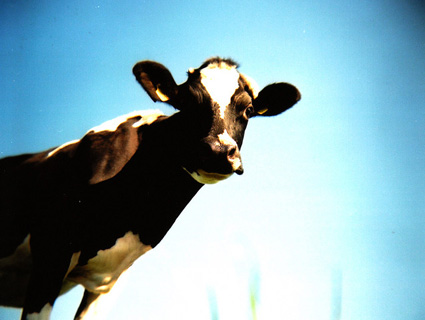 Is vegetarianism always better for the planet than eating meat? Four food and environment experts and MoJo readers weigh in at our forum.

I froze. The waitress looked at me expectantly. “Medium. You want medium,” my friend whispered. “Medium!” I said.

“You sure about that?” Withering look.

“I’m a lifelong vegetarian,” I confessed.

My efforts to blend in at the burger joint were not off to a great start.

What was I doing there in the first place? I live in Berkeley, California, where even the greasiest of spoons offers a tofu scramble. But lately, something strange has happened: Despite local food god Michael Pollan’s edict to eat “mostly plants,” my friends seem to be consuming more meat, not less. Parties are no longer just parties—they’re pig roasts, or chili cook-offs, or crab feeds. At the farmers market, stroller moms swarm the meat stand to flirt with the hunky, bearded butcher. Meatpaper, a fledgling magazine of “art and ideas about meat,” has garnered much local buzz. And an acquaintance recently told me she’s joined a meat CSA (wherein you get a butcher box direct from the farm) for “environmental reasons.” No doubt the bucolic pasture where her burgers grow up is a far cry from a Food, Inc.-style feedlot, but aren’t my salads, cage-free egg sandwiches, and veggie burgers always better for the planet than any kind of meat—no matter how responsibly it’s raised?

Not necessarily, says Gidon Eshel, a Bard College geophysicist who analyzes the energy payoff and environmental impacts of food production. In general, Eshel says, it’s true that raw veggies are an excellent nutritional bargain: For every 100 calories of energy put into producing conventional beef, from farm to supermarket shelf, you get only six calories back to eat. Compare that with apples, which yield 110 calories, or raw soy: an amazing 415. In terms of greenhouse gases, switching from a diet that includes red meat to a plants-only one is roughly equivalent to trading in your SUV for a Camry.

But a girl can only eat so much roasted kale before she starts craving protein: tofu, veggie burgers, and the (okay, creepy) occasional piece of fakin’ bacon. But coaxing soy into a red-and-white rectangular strip takes work—which is why Eshel believes most veggie burgers are the caloric equivalent of “shooting yourself in the foot.” A 2009 study by the Swedish Institute for Food and Biotechnology found that while producing a plate of peas requires a fraction of the energy needed to produce the same number of calories of pork, the energy costs of a pea-burger and a pork chop are about equal.

That’s not the only issue with fake meat. Consider the process that keeps your veggie burgers low in fat: The cheapest way to remove fatty soybean oil is with hexane, an EPA-registered air pollutant and suspected neurotoxin. A 2009 study by the Cornucopia Institute, a sustainable-farming nonprofit, found that Boca, Morningstar Farms, and Gardenburger (among others) market products made with hexane. The finding was enough to turn Cornucopia researcher Charlotte Vallaeys off of fake meat. “I can’t think of a single meat-alternative product where I could explain how every ingredient is made,” she says. “With a grass-fed burger, well, there’s one ingredient. And with grass-fed burgers I actually might be doing something good for the environment.”

So plant protein is usually the greener choice, as long as it’s not overprocessed. But for the meat we do eat, the best approach is to return to our traditions, says Jim Howell, a senior partner at the Savory Institute, a think tank that promotes ecologically sound grazing practices. Howell points out that the world’s prairies coevolved with herds of herbivores, meaning that cows (and other grazers, like bison) are great grass farmers. While conventional farms rely on oil-based synthetic fertilizers, grazers make their own organic version—their excrement nurtures grasses that grow year-round. Well-managed pastureland also retains topsoil remarkably well—switching from cornfields to pastureland, according to Ontario’s Ministry of Agriculture, Food and Rural Affairs, cuts soil erosion by 93 percent.

Yet 71 percent of America’s prairies have been converted to cropland. And more than half of all corn and 98 percent of all soy grown in the United States goes to raise livestock, even though feeding this diet to cows promotes virulent strains (PDF) of E. coli and liver abscesses—which farmers treat with high doses of antibiotics. “So there’s all this land going to feed livestock that aren’t even really evolved to handle that kind of food,” says Howell. “If you made all that land into tall-grass prairie, you’d still have land to grow grains for humans.” You’d also sequester more carbon: A USDA study found that Great Plains pastureland stores 54 percent more CO2per acre than cropland.

For every 100 calories spent producing a food—from farm to supermarket shelf—how many calories do you get back to eat? Here’s how several common protein sources stack up.

Grass-fed meat does have its drawbacks. It can cost twice as much as conventional beef, ranchers say. And Anna Lappé, author of the recent book Diet for a Hot Planet, points out that it can be hard to find at the supermarket. “It’s not that meat that most people have access to,” she says. A 2010 study also found that, because grass is harder for cows to digest than grain, pasture-raised cows produce 21 percent more methane—another potent greenhouse gas—than their conventional counterparts. (Grass-fed advocates call, well, bullshit on such studies, since they don’t take into account the greenhouse gases the pastures absorb. In April, meanwhile, Nature ran a report from scientists who found that spring grazing in certain climates actually reduces the amount of nitrous oxide, a third greenhouse gas, released by soil microbes.)

Even Eshel, who says he is mostly vegan and told me he’d eaten a dinner of canned tomatoes, fava beans, and chickpeas the previous evening, concedes that if you swear off meat completely, you’re missing out on some great caloric bargains—fish like sardines, anchovies, and herring, the grazers of the ocean, yield about 110 calories for every 100 spent. By contrast, eggs, with a caloric yield of just 11, are “very inefficient in terms of greenhouse gas, land, water, and nitrogen—almost any variable you choose to look at,” Eshel says. Yet some greens are even worse: The caloric yield of supermarket spinach and mesclun, for instance, is worse than that of beef, since growing it in winter climates requires heated greenhouses, while shipping and storing it in warm weather requires refrigeration. The take-home message: There are no shortcuts. “The key is not succumbing to those fast and loose answers from food mavens,” says Eshel. Lappé agrees: “Just because you’re not eating meat doesn’t mean you don’t have to educate yourself.”

Which basically explains how I found myself at the burger joint: I had decided to take myself out for a grass-fed educational experience. When my burger came, I doused it in ketchup and took a timid bite. “What do you think?” asked my friend. Pretty good: Pleasantly charred outside, tender in the middle. Plus, it had staying power. I didn’t feel hungry for the rest of the evening.

So will I join a meat CSA? Doubtful. More likely, I’ll stick to “mostly plants,” with meat as a very occasional indulgence. Like fakin’ bacon used to be. Except less creepily rectangular. And—okay, I admit it—tastier.