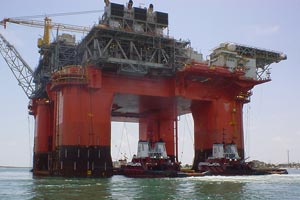 Offshore drillers rejoiced when Interior Secretary Ken Salazar announced on October 12 that the United States was once again “open for business,” just six months after the Deepwater Horizon oil rig began pouring crude into the Gulf of Mexico. But Salazar didn’t mention BP’s other major oil production platform in the Gulf, the one that watchdogs have called a “ticking time bomb” ignored by federal regulators. The BP Atlantis platform is operating in deeper waters and is extracting more oil from the Gulf each day than the Deepwater Horizon well leaked, but neither the company nor the feds have proved it is safe.

Located 124 miles off the Louisiana coast, the Atlantis platform produces 200,000 barrels of oil daily, more than triple the amount of oil that spilled from the Horizon site each day. But long before the Deepwater Horizon disaster, a whistleblowing former BP contractor tipped off regulators that the Atlantis may be violating the law, and environmental groups and members of Congress have been publicly questioning the platform’s safety ever since.

According to Kenneth Abbott, a former BP contractor who worked on the platform from 2008 through early 2009, more than 7,000 documents necessary to operate the platform safely are missing or incomplete. Abbott says the vast majority of the project’s subsea piping and instrument diagrams were not approved by engineers, and the safety systems are out of date. In practice, the lack of documentation on this platform would make it extremely difficult to respond in the event of an accident like the Deepwater Horizon blowout, critics say, because no one really has an accurate picture of the Atlantis’ design.

Abbott first aired his concerns to federal regulators in March 2009. In February 2010—two months before the Deepwater Horizon disaster—a group of 19 Democratic House lawmakers led by Rep. Raul Grijalva (D-Ariz.) took up Abbott’s cause, raising concerns about the Atlantis in a letter to regulators at the Minerals Management Service (renamed the Bureau of Ocean Energy Management, Regulation, and Enforcement shortly after the spill), and the agency promised to look into it.

Shortly after the Deepwater Horizon spill brought renewed interest in BP’s conduct in the Gulf, Grijalva and other lawmakers sent another letter asking Interior Secretary Ken Salazar to call for “an immediate shutdown” of the platform “until it can be shown that this platform is operating safely.” The Department rejected that request but said BOEMRE’s investigation would “determine whether any enforcement action…is appropriate.”

That report has been delayed several times and is now five months overdue. So far, BP and BOEMRE have only provided 412 of more than 7,000 documents. In response to Grijalva’s request to see electronic copies of the drawings and other engineering records related to the platform, the agency indicated in a letter that it didn’t plan to provide all the  documents in question.

Instead, BOEMRE gave Grijalva’s office with a letter from BP noting that it “hereby verifies” that the Atlantis has been certified. The letter from BP Exploration & Production vice president Simon Todd, dated August 9, states that the actual certification is on file in the company’s Houston office, but a copy of the certification wasn’t included.

Grijalva pointed to this latest letter from BP as evidence that the platform has run roughshod over regulations, and that BOEMRE has failed to enforce those rules. “If this doesn’t wake Congress and the government up to our oversight and regulatory failures, maybe nothing will,” said Grijalva. “We obtained this evidence with great difficulty, months after we requested it, from an agency that thinks it knows what Congress does and doesn’t need to see to conduct its affairs.”

“The agency continues to turn a blind eye to this,” says Zach Corrigan, a staff attorney with Food & Water Watch. The group has joined with Abbott in a suit in a US District Court in Texas to force BP to shut down the Atlantis until it can prove that it is in compliance. What’s more, Corrigan argues, there may be reason to worry about the other production operations in the Gulf. While the Obama administration put a temporary hold on new deepwater drilling operations, platforms already in production like the Atlantis were not even put on hold to allow inspectors to make sure they didn’t have problems that could cause another spill. “The lifting of the moratorium was completely premature, given that we don’t even know the root cause of the Horizon explosion,” said Corrigan. “There are even larger, even deeper producing platforms like Atlantis that are ticking time bombs.”