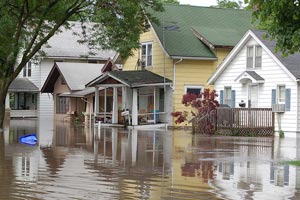 In the next decade, the effects of a rapidly warming climate could kill 5 million people—as many as live in Singapore or Finland. More than 99 percent of those deaths will likely occur in developing countries, and almost four-fifths are expected to happen in South Asia and sub-Saharan Africa. There could be as many as a million climate-related deaths each year by 2030 if nations don’t significantly cut planet-warming emissions, according to a report released Friday.

Researchers at Dara, a humanitarian organization based in Madrid, analyzed nations’ current vulnerability to climate change and predicted how climate-related disaster—increased disease and malnutrition, more frequent extreme weather events, increased habitat loss, and additional stress on already unstable economies—might play out around the globe in the next two decades.

Despite these daunting findings, negotiators at the Cancun climate talks are struggling to reach an agreement about how best to address climate change in the coming years. Most of the discussion in past years has focused on mitigation—how countries can cut emissions and slow rising temperatures. But reaching a new global consensus has proven more difficult than leaders once hoped; a binding agreement was put off at last year’s meeting in favor of a voluntary political accord, and there is still no real clear picture of when or if a new global deal will be reached. And even if countries follow through on the pledges they’ve made so far, the world would still be on path to more than 3 degrees of warming by the middle of the century.

“The longer we wait to tackle climate change, the more urgent adaptation gets,” said Tonya Rawe, a policy advocate for the humanitarian group CARE International. “There is a limited funding, countries are aware that when there is limited resources, they’re in the difficult position of scrambling for funds.”

And the effects of warming are already becoming clear. 2010 is now on pace to become among the warmest three years on record. Without a diversion from the current emissions path, scientists have predicted that there could be a 4 degree Celsius (7 degree Fahrenheit) temperature rise as soon as the 2060s.

In the first nine months of 2010, 21,000 people around the world died as a result of extreme climate-related events like major storms, heat waves, and flooding—more than double the number in 2009, according to a report compiled by the humanitarian group Oxfam International. That includes wildfires in Russia caused by soaring temperatures, record summer heat waves around the world, and both massive flooding and the highest temperature on record for Asia—53.7 degrees Celsius (129 degrees Fahrenheit)—in Pakistan.

The biggest factor in a nation’s vulnerability to global warming is financial and technical capability to deal with the changes, said Saleemul Huq, a senior fellow at the International Institute for Environment and Development, adviser on the Dara report, and lead author of the Intergovernmental Panel on Climate Change’s report on adaptation: “The underlying socioeconomic situations of those countries make a huge difference.”

The report does outline a number of measures nations might take to help people adapt to a warmer world, from introducing more drought-resistant crops, to harvesting rainwater, to deploying mosquito nets, to building seawalls and improving drainage systems to prevent flooding in heavy downpours. But many of the most vulnerable countries lack the economic resources to access and deploy them.

In Copenhagen, developed countries agreed to provide a combined $10 billion a year for the next three years in to kick off programs to help developing countries cut emissions and adapt to changes like rising seas, changing precipitation patterns, and massive heat waves. The Copenhagen agreement also stated that developed countries would raise $100 billion a year by 2020 for a global climate fund, calling for the majority of funds to go to the “least developed countries, small island developing States and Africa.” The draft negotiating text released in Cancun calls for “enhanced action on adaptation” and outlines multiple options for a final agreement on the issue in Cancun.

Some of this so-called “fast start” financing has already been made available, which the Dutch government has created a website to track. But development groups have expressed concern that much of those funds are coming from other development aid programs rather than representing new and additional spending—and an analysis from the World Resources Institute found that many of the pledges are “restated or renamed commitments already made in the past.”

Groups are also concerned that only about 10 percent of the fast-start funds have gone to adaptation so far, according to a recent analysis from Oxfam, despite the fact that last year’s agreement called for a “balanced allocation between adaptation and mitigation.”

Since those pledges were made in a political deal outside of the UN process, a major part of negotiations in Cancun is focused on formalizing the financial commitment and setting up the blueprint for how the long-term fund would actually work. Negotiators now must determine who would oversee that fund, the size of the fund, and how to deliver the money—in a way that is fair to both developed and developing countries.

Negotiators are also trying to figure out where the funds will come from. A recent report from the UN’s High-Level Advisory Group on Climate Change Financing suggested new ways of generating money for the fund, including setting an emission fee on international aviation and shipping, the sale of emission permits, and the removal of subsidies for fossil fuels.

One of the more promising options, observers say, is a fee on aviation and maritime shipping, two global sectors not currently regulated under the Kyoto Protocol. The two sectors currently account for 3 percent of global emissions, but those emissions are projected to grow by as much as 300 percent by 2050.

Humanitarian groups are also concerned about the potential the involvement of multinational banks like the World Bank—which is controlled by donor countries and gives little say to the countries who are receiving the funds, and the possibility that some funds may come in the form of loans—rather than grants. An analysis from the European Climate Foundation found that about 32 percent of climate finance so far has come in the form of loans rather than grants. And there’s concern that the $100 billion put on the table is simply too little. The United Nations Development Program has estimated that between $86 and $109 billion could be needed as early as 2015 for adaptation alone.

It’s not even clear whether the new fund will even get off the ground here in Cancun, mostly because the US has maintained that it won’t agree on elements of the fund unless there’s greater clarity on how the emission reductions of countries will be monitored and evaluated—a major sticking point with China last year.

But groups who focus on the human impacts argue that the world can’t wait for the funds. “[The US is] being the biggest obstacle,” says Karen Orenstein, international policy campaigner at Friends of the Earth. “Providing money for poor countries that didn’t cause the climate crisis so they can adapt and mitigate—that’s not a bargaining chip. To say this is our bargaining chip is unethical.”