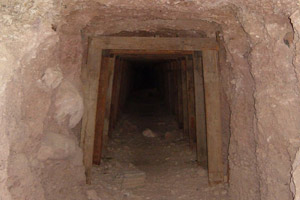 Forty-eight coal miners died on the job in 2010, 29 of them in a single incident at Massey Energy’s Upper Big Branch mine in Raleigh County, West Virginia—the worst mining accident in the US since 1970. This week, the Mine Safety and Health Administration (MSHA) outlined the preliminary results of its investigation into the April 5, 2010, accident. The exact causes remain unknown, but safety investigators have made one thing clear: The explosion in the mine was preventable.

Not that there weren’t plenty of red flags leading up to the tragedy; MSHA had issued 557 citations for violations in the year before the explosion, shutting down work in portions of the mine 48 times for noncompliance. This has left many wondering why a mine with such a dismal safety record and a history of serial violations was allowed to keep operating until disaster ensued.

During a briefing with reports on Wednesday, Kevin Stricklin, MSHA’s coal mine safety and health administrator, defended his agency’s role in ensuring safety conditions were met at the mine. “We’ve issued more orders at this particular mine than any mine in the country,” he said. “I think my folks were enforcing the law here.”

“We’re stuck between ‘Is it job-killing?’ or ‘Are we going to let companies go on people-killing?'”

That, mine-safety advocates say, is precisely the problem. MSHA may have been enforcing the law, they say, but the law simply doesn’t give the agency the regulatory clout to adequately protect the health and safety of miners. As it stands, repeat offenders like Massey have long evaded more serious consequences for their offenses. This is largely due to a long-standing interpretation of the Federal Mine Safety and Health Amendments Act, the 33-year-old law governing mine safety, that the industry lobbied hard to enshrine. The provision in question concerns what constitutes a so-called pattern of violations (POV); this designation allows MSHA to impose tougher inspections and shut down mine operators for repeat safety offenses if they fail to make major improvements.

In practice, not a single mine has ever been shuttered for a POV offense. Why? Because in 1989, when MSHA was finalizing its guidelines for designating repeat violators, the industry pushed for a very generous reading of the language. Under the interpretation that prevailed, mining companies can collect citation after citation, but the POV label would only be invoked based on a final determination for each alleged violation by the Federal Mine Safety and Health Review Commission, the body that handles appeals of these citations. This created an incentive for the industry to aggressively contest citations, drawing them out for months in order to avoid amassing enough finalized citations to qualify for POV enforcement. That explains how, after collecting more than 500 citations in a single year, Upper Big Branch still didn’t qualify as a serial violator requiring closer scrutiny or harsher penalties.

But the rules could soon change. Earlier this month, MSHA laid out its regulatory agenda for the coming year, which includes adjusting the POV system to make the rules consistent with the “intent of Congress,” as the Labor Department’s assistant secretary for mine safety and health, Joe Main, said earlier this month. MSHA plans to unveil a draft proposal that will make it easier to levy the kind of penalties on repeat safety offenders that mining companies respond to—namely, shutting down unsafe mines.

Main, a former administrator of the United Mine Workers’ Occupational Health and Safety Department, has previously cited “serious flaws in the current system” for policing coal mines, which has restricted the federal government’s ability to crack down on companies that routinely violate health and safety codes. During his tenure, the Labor Department has noticeably stepped up efforts to hold serial safety violators accountable. Last year, MSHA notified 14 mines that they had a potential pattern of violations. And last November, for the first time, the agency sought an injunction against a mine for serial violations—the Massey-owned Freedom Energy Mining Co.’s Mine No. 1 in Pike County, Kentucky. In seeking to impose this harsher penalty on the mine, the agency cited 1,952 safety violations at the site since June 2008, noting that the mine was “one accident away from tragedy.” The Department of Labor and Massey reached a court settlement earlier this month, with Massey consenting to close down the mine rather than attempt to address the safety violations.

Despite the uptick in enforcement, Main has said tougher legislation is needed from Congress in order for the MHSA to fully carry out its mandate. “This is a stopgap measure until reform can occur,” he said last fall, referring to the proposed regulatory changes the agency is planning to release later this month. At the time, Rep. George Miller (D-Calif.), then the chairman of the House labor committee, had proposed a bill that would have increased the MSHA’s ability to crack down on repeat violators by counting citations toward POV enforcement, rather than merely final orders. The measure would have also granted the MSHA regulators subpoena power for investigations into mining accidents, enhanced whistleblower protections for miners who report safety lapses, and increased penalties for violations. But Republicans balked at the changes, and at the close of the 111th Congress, the measure was left on the cutting-room floor.

Phil Smith, the spokesman for the United Mineworkers of America, expressed hope that the MSHA can do more with its existing authority—”certainly more than they are doing now.” He’s not optimistic that the MHSA’s regulatory authority will be bolstered during the current Congress, in which Republicans have harped on the “job-killing” effects of government intervention. “We’re stuck between ‘Is it job-killing?’ or ‘Are we going to let companies go on people-killing?'” he said.