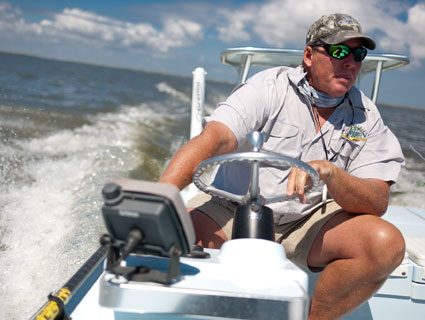 To read interviews with other Gulf residents a year after the spill, click here and here.

Ryan Lambert rebuilt his charter-boat business, Cajun Fishing Adventures, after Hurricane Katrina destroyed it in 2005. It was the first one back in business in Buras, La., a town that was “completely wiped off the map” in the devastating storm, he says. Recovering from last year’s massive oil spill, though, has presented yet another challenge for Lambert and his 22 employees. A year after the spill that killed his business for 2010, bookings for this summer are way down. His 14 boats are docked at a time of year when they’d normally be out ferrying the scores of tourists who come to Plaquemines Parish to fish for trout and other Gulf seafood.

Lambert, who is 53, says he is not against drilling off the coast, but argues that Congress should put in place real safeguards to protect everyone else who relies on the Gulf for their livelihood. The compensation from BP for the damage so far has been a joke, Lambert says. Last June, he got a check from BP for only about half of the business he’d lost in just the first two months of the spill. He didn’t see another check until this week—one for $155.02, which the company said was interest.

Meanwhile, Lambert is still finding tar balls washing ashore and fears he will for the rest of his life. “It tears me apart to know my children and grandchildren will never see what I’ve seen,” he says.

Mother Jones talked to Lambert between his meetings with members of Congress last week.

Mother Jones: Would you say that the main problem you’re facing is the claims process?

Ryan Lambert: The Department of Justice came out and said, “Okay, y’all are being too stingy. You’re not giving the money out.” The next week, BP came out and said, “Oh, I think we gave them too much.” And that was the end of it. Nobody got another penny. So, until last night, with they sent $155, I hadn’t received a penny since last June, and I’m the largest [charter boat company] on the Gulf Coast.

MJ: What have you heard from the Gulf Coast Claims Facility?

RL: They don’t say nothing. There’s no one to talk to. You go to the claims office, and they ain’t doin’ nothing. The guys that filed the final claim—one of them got a letter saying, “We’re gonna give you an offer in 10 working days.” That was two months ago. They have 90 days to do it, and 90 days have lapsed, and still nothing. No one communicates and no one knows anything.

MJ: So you said you applied for the emergency funds, but you haven’t got anything since June.

RL: Yeah, I probably think it was since June. Initially, I probably received $225,000. In the scheme of things, that’s not much pay. For me to run a business for 22 families, it takes a lot of money to do that. Last year was devastating for all of them. The ones that worked the cleanup, they made a lot of money. I paid $400 a day. They paid them $1,500 a day. Why would you take a man that makes $400 a day and give him $1,500, plus pay all his expenses, if you weren’t giving him shut-up money? They couldn’t take a picture, they couldn’t say anything. And for $1,500 a day they didn’t dare try to lose that job. So, not only did they take away my business, they took away my guys and made me stay open, because the Oil Pollution Act says that I’m legally obligated to keep trying to negate my loss.

MJ: Now the claims facility is using an estimate of the impacts, of how much damage there will be going forward, to determine losses. Do you think that formula is realistic?

RL: Well, the fishermen, they’re going to get two years. And the oystermen, they’ll get four years. The oystermen have a great lobby, so they figured they’d help them out. But here it’s a year already and my business is down 55 percent on my best two months for May and June. A shrimper, or a crabber, as soon as there’s shrimp or crab, they can go right back to it. I need people to change their perception. I need customers. So I have to rebrand. I have to change the perception, all over the country, so they want to come fishing again. So I have a much harder plight. It’s going be a lot longer than two years, even if the fish come back soon.

The whole thing is a disaster for the people that make their living off the land. These are people who, if the fishing is not good, or the shrimping is not good, we don’t wait in the unemployment line. We don’t depend on anybody for anything. We’re not beggars. We’re not asking for something that we don’t deserve.

MJ: How is this coming summer looking for you?

RL: After June, I have no reservations right now. Now, in the next six weeks they might come. But even that, what I have right now, I’m way down compared to last year. In order to get a date back in the day, you’d have to book three, four months in advance to get a slot. Now the perception is still there that people don’t want to eat the fish.

MJ: If there’s one thing you want people outside the Gulf area to know a year after the spill about what’s still going on, what would it be?

RL: BP hasn’t made people whole. I’m not saying I’m so much worried about me, because financially, I’m okay. I’m the oldest one in the business, just about. But the youngest guys are starving to death. People are losing their homes, losing their boats, and there’s BP advertising that they’re spending millions of dollars. They’re not. They’re not making anyone whole.