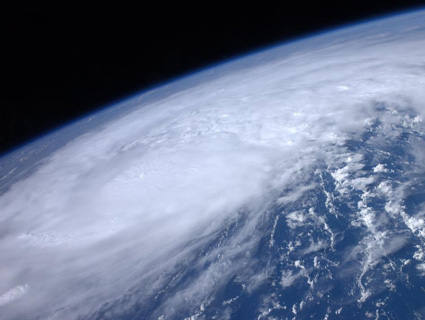 Editors’ note: This is a basic primer on what’s happening with Hurricane Irene. It is being regularly updated with the latest news and social-media coverage. Jump to the latest update or read more about the awesome—and terrifying—science of the storm.

Coming at us just days after a wide-reaching earthquake jolted the East Coast, Hurricane Irene is gathering steam for a possible landfall in that same area as soon as this weekend. But unlike the quake, Irene might be cause for real alarm, including warnings from experts that it could be the “most devastating storm to ever hit” states like New York and New Jersey. Read on for more info on Hurricane Irene.

How bad will it be? Pretty bad, if the predictions of weather experts and the beating already sustained by the Bahamas are any indication. With winds up to 105 mph, the storm was classified as a category two hurricane as of its landfall Saturday morning—the National Weather Service’s way of saying that “extremely dangerous winds will cause extensive damage.” Hurricane Katrina was a category three, and the deadliest hurricane in US history, the Galveston, Texas, disaster of 1900, was as a category four that took over 8,000 lives.

The governors of Virginia, New York, Maryland, North Carolina, Connecticut, and New Jersey declared states of emergency Thursday, and on Wednesday the Federal Emergency Management Agency issued a warning for the entire East Coast. In North Carolina, over 200,000 people have already headed for higher ground, and a mandatory evacuation in New Jersey could affect up to 750,000. Damage projections are already up to $14 billion, air travel will most likely be disrupted, utilities could shut down, and the price of gas could rise as coastal refineries shut down. Even Major League Baseball could be affected. In short, it’s going to be a rough weekend for the East Coast.

Where and when will Irene hit? North Carolina felt the first impact Saturday morning, according to maps from NOAA. By Sunday evening, the storm will move through the densely populated corridor from Washington, DC, to New York City. Throughout that track, storm surges could reach 10 to 15 feet, although the latest estimates suggest the surge in lower Manhattan will be only around 4 feet (still enough to flood the subway).

How can I stay on top of the latest? AccuWeather.com’s severe-weather expert Henry Margusity is tweeting updates continuously, as are NOAA, FEMA, and FEMA administrator Craig Fugate. You should also watch the hashtag #Irene. CNN is maintaining an open repository for updates. There’s an awesome (and terrifying) live map of the hurricane’s progress here, and your intrepid reporters at MoJo will keep this post fresh throughout the weekend.

Why do we give hurricanes names? Good question.

Is there any link between Irene and the Virginia earthquake? Probably not, but maybe.

Got any recommended listening for hurricanes? Glad you asked.

How has Obama reacted? The president decided Friday morning to cut short his vacation on Martha’s Vineyard and return to Washington, DC, in advance of the storm. In a statement to reporters (see the AP video below), Obama said: “I cannot stress this highly enough: If you are in the projected path of this hurricane, you have to take precautions now. Don’t wait, don’t delay. We all hope for the best, but we have to prepare for the worst.” The Hill reports that the feds are deploying millions of meals and tens of thousands of cots and blankets to areas expected to be hit by the storm.

Just how big is this thing, anyway? This video from the International Space Station gives some idea of the ridiculous scale:

Here’s a similar image, from a different angle. Wow: 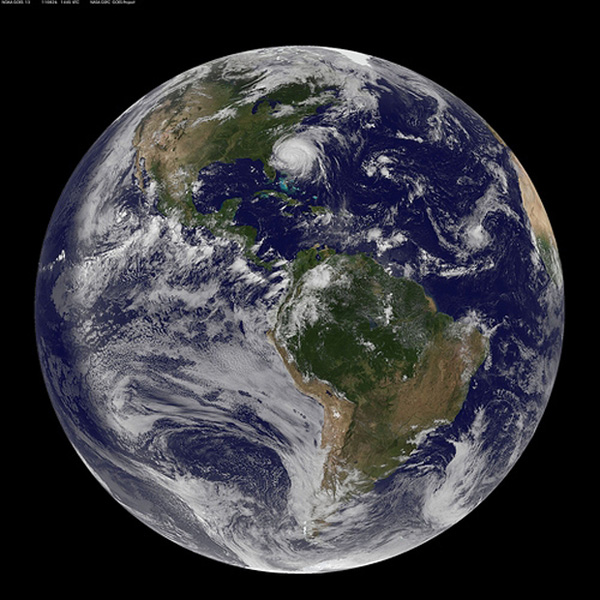 The earth, as of Friday morning. Irene moves in on the East Coast. NASA Goddard Video and Photo/Flickr

Stay safe out there, and, together with our Climate Desk partners, we’ll be putting more updates in the Storify widget below throughout the weekend. Help us populate it by sending updates to @theclimatedesk or via the #IreneCD hashtag.