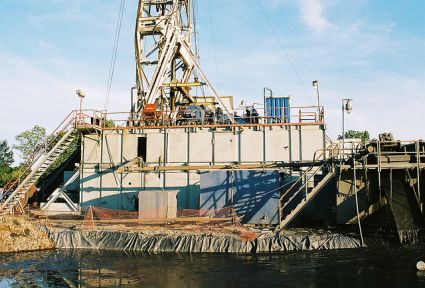 At Trinity Park, a popular picnic spot near downtown Fort Worth, Texas, a scorching summer has killed stately oaks and turned lawns into brittle moonscapes. On the park’s eastern edge, loud diesel generators pump some 4 million gallons of water from the Trinity River, though they’re not supplying the park or city residents, who began facing drought-imposed watering restrictions on Monday. Instead, Chesapeake Energy is piping the water across the park to frack a nearby natural gas well.

As Texas faces its worst single-year drought ever, many drinking wells have failed, entire towns could go dry, and millions of residential water users face mandatory cutbacks. A study released at a meeting of Texas water districts yesterday predicted that the drought will persist through next summer. But so far, the state’s booming and increasingly thirsty natural gas industry faces no limits to how much water it can pump.

“In a drought like this, every drop is important,” says Don Young, a local anti-fracking activist who showed me where Chesapeake’s water pipes had been hoisted over a jogging trail. “And if we’re asked to conserve, then I think the drilling industry should be doing the same thing.”

Fracking, which employs high-pressure jets of water to fracture rock and release natural gas, accounts for a fast-growing share of water use in some of the driest parts of Texas. Though the overall affect of fracking on reservoirs and rivers in Fort Worth’s Barnett Shale zone is dwarfed by agriculture and homeowners, its local impacts can be severe. For example, in the Upper Trinity Groundwater Conservation District (UTGCD) west of Fort Worth, the share of groundwater used by frackers was 40 percent in the first half of 2011, up from 25 percent in 2010.

In the midst of a severe drought, Chesapeake Energy pumps 4 million gallons of water from a river for a fracking operation in Fort Worth.“Obviously, that’s a pretty heavy draw on an aquifer when we’re in the midst of a drought,” says Bob Patterson, UTGCD’s general manager. In his water district, 40 to 50 wells have run dry and many municipalities have declared stage two or stage three drought conditions, which involve severe restrictions on residential outdoor water use. But natural gas drillers can still pump as much water from the district as they want. Patterson says restrictions targeting drillers in his area would have to be imposed by state agencies or the Legislature, which “has been fairly lax.” He and many other water managers want Texas Gov. Rick Perry to place limits on the drillers.

Critics of fracking claim the industry actually uses far more water than it lets on. Because water used in the fracking process becomes contaminated with hydrocarbons and other toxins, frackers typically sequester it deep underground, removing that wastewater permanently from the hydrologic cycle. Unlike the water used for irrigation or daily living, it doesn’t reenter rivers, aquifers, or the atmosphere. “Fracking water is typically not recycled,” says Paul Hudak, a hydrologist with the University of North Texas. “It’s not really economical.”

A similar battle is playing out in the Eagle Ford Shale zone of south Texas, where, due to a quirk of geology, wells typically require four times more fracking water than those in the Barnett Shale area. Each Eagle Ford well uses an average 13 million gallons of water, enough to supply the needs of 240 adults for a year. Some farmers in the area have refused to sell water to the drillers for fear of not having enough for their crops. ExxonMobil has taken to recycling fracking fluids, and Anadarko Petroleum is replacing dirt roads with limestone to cut down on water needed for dust control.

Faced with drillers’ booming water needs, some Texas cities have taken matters into their own hands, charging drillers more for water or refusing to sell to them at all. A group of cities, including Fort Worth, is encouraging drillers to tap into a new pipeline that would let them purchase reclaimed industrial water at reduced rates. The UTGCD’s Patterson urges drillers to recycle their wastewater, but says he lacks the legal authority to make them do it.

Prior to the drought, opposition to fracking typically focused on the industry’s potential to contaminate drinking water, befoul the air, and disrupt neighborhoods with noisy drilling operations. But in the long run, opponents now see the industry’s thirst as a major sticking point. A 2007 study by the Texas Water Development Board estimated that fracking could consume up to 13 percent of the Barnett Shale zone’s groundwater by 2025—water the area may not have to spare if droughts like this one become more commonplace.

“It’s a symbol of the arrogance of these companies that they can run these pipes all through the park,” said Young, a founder of Fort Worth Citizens Against Neighborhood Drilling Ordinance. “This is not doing the public any good at all, but these companies don’t care because they’re making money.”

Here’s a video of Young giving me a tour of Chesapeake Energy’s pumping operation: