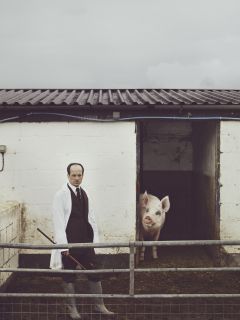 Matthew Herbert has devoted a large chunk of his life to listening. Since the ’90s, the UK-based electronic musician has been collecting and recording everyday sounds and making them into music. The result is an eclectic list of albums: One is made of sounds from kitchen objects; another from the human body; yet another samples food sounds, from noises inside an industrial poultry factory to thousands of people taking a bite of an apple at the same time.

But his latest effort, One Pig, is different: Over the course of a year, Herbert recorded the life of a pig, from the time it was born till its last hours in a truck on its way to the slaughterhouse. The result is a haunting tribute to the animal responsible for most of the music. “I very much think of the record as a John Coltrane record where the pig is John Coltrane,” he says. “All the stuff that I’m doing is just there to support him and bring out that voice.” I talked to Herbert about hog-based instruments, PETA’s problem with the album, and the pig’s blood he still has in his fridge. Here’s a trailer for the album:

Mother Jones: What gave you the idea for One Pig?

Matthew Herbert: I wanted to write a piece of music that was about life and death. A human would have been difficult to do, so I thought I should do an animal. Then it became a farm animal. The more you look into pigs the more you realize quite how everywhere they are. People come in contact with parts of pigs probably between 20 and 50 times a day. And that’s before you even eat your dinner. And yet we just have a long string of negative words about them.

MJ: Why a pig rather than any other animal?

MH: Pigs are very intelligent. They’re very misunderstood. Yet they’re sort of man’s unofficial best friend. We domesticated them before we domesticated dogs. Some cultures see them in a very hostile way, and other cultures revere them. So, for example, the attitude toward pork in Israel is very different from the attitude toward pork in Spain. It really marks a division in cultures.

MJ: How did you find this particular pig?

MH: We don’t have any real right to see industrially raised animals, let alone be part of that process. So I decided to follow a pig from a farm where I knew I had eaten in the past. So in a way it was like tracing my own food chain. So I just approached the farmer. He was a little suspicious, but by the end he came around to the idea.

MJ: So if you could have gone into an industrial farm for the piece, would you have?

MH: I would have liked to have gone in. On the iTunes version I got sounds sent to me from Compassion in Farming, the sounds of pigs in crates, and pigs having their teeth removed and castrated, and all those negative sounds of industrially raised pigs. But it would have been hard to make a record that was anything other than dark and miserable. This way there are moments of optimism.

MJ: Tell me about the farm.

MH: I can’t give too much away, because it’s an institution that didn’t want to be involved in what they thought could be a controversial project. It’s a very small farm. It probably has between 50 to 100 pigs, 20 to 40 cattle, chickens, geese, ducks, llamas. It’s probably about 8 to 10 acres. It’s on top of a hill overlooking the sea, a beautiful spot. But also very brutal. You can hear on the track “November” a very fierce wind coming in. And on “December” you can hear me crunching through the snow and ice.

MJ: What was the hardest part of the recording process?

MH: It was incredibly difficult to meet the pig’s carcass when it came back from the abattoir. It was also very hard to eat the pig when it was first presented to me.

MJ: What was the process of making the music itself like?

MH: You find yourself in all sorts of unexpected territory. So for example, in “October,” all the background noises are derived from a cow. I wasn’t expecting that. The album is called One Pig, not called A Cow in the Background. But you realize you’re on a farm, and there are a lot of other animals that are going to be killed there and eaten. One of the hardest things to get is pitch. The cow made a lovely noise when I sampled it. It just made a nice, beautiful warm and rich tone. In another track, “December,” the tractor went past, and it played almost a tune. That became a bass line. The pig had moved into a much more metallic sty in “December,” so you can hear the sounds change from the old wood and concrete stable.

MJ: Tell me about the instruments that were made from different parts of the pig. 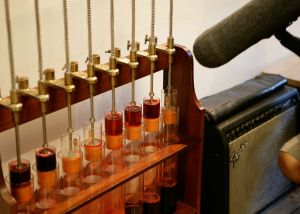 This instrument allows you to “play” blood from the pig that starred in Matthew Herbert’s album Photo by Chris FielMH: I was interested in not having any waste. We throw away 30 percent of our food in this country. So I tried to use up the waste we did have. We used some of the skin to make a drum. We wanted to make a flute out of some of its bones, but unfortunately the bones were too big so that didn’t really work. So we made them into a percussion instrument instead. Then an instrument maker who lives near me made this blood instrument to play the pig’s blood. It’s a series of two-foot-high glass test tubes, quite fat. A plunger pushes down the blood inside and through a metal reed. There are eight of them, so they play a scale. It’s a pretty disturbing instrument, I have to say. We had some trotters left, so we had them stuffed, made into a candelabra. We made candles from the pig’s fat. We made some dyes from the pig’s blood so we could dye fabric. I still have four liters of blood in my fridge, which has gone off, but I can’t bring myself to throw it away without doing something with it. 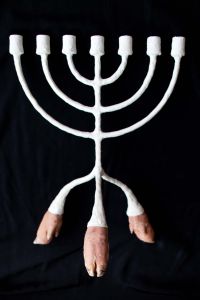 A candelabra made from the pig’s hoofs Photo by Chris FielMH: We just had a few people around. Almost more chefs than guests. The idea was to celebrate the different ways a pig could be cooked. So we had Asian ribs and a traditional English tail, breaded and deep fried, and the head was taken apart in a French way. Then we had sausages, charcuterie, and bacon.

MJ: You weren’t allowed to witness the actual slaughter. Why was that?

MH: The government has handed control to private companies, and private companies have the right to exclude you. It’s disgusting, really, that we’re asked to put these things into our bodies, but we’re not allowed to see how they’re raised or how they’re fed or killed or treated. I think it’s a disgrace, really. I think we’ll look back in 100 years and think this is a period of madness whereby all these decisions about our food are just handed to some faceless, nameless authority whose motivations are just profit.

MJ: PETA came out condemning One Pig. What was your reaction to that?

MH: I had a number of reactions. The first one was confusion, because I thought they would be supportive. I was listening in to what otherwise would have been unheard, just another death in the food chain. I thought they might want to work together on it. Then I was pretty annoyed that they didn’t really even talk to me about it before issuing a statement to find out what my motivation was. But thirdly I was kind of perversely excited as well because it was the very idea of a piece of music that they found really disturbing. I loved the idea that in the 21st century, despite us having heard so many bits of music it was still possible for the idea of a piece of music to be disgusting or disrespectful or morally dubious. I found that quite exciting really.

MJ: How was One Pig different from your previous projects?

MH: The biggest difference is that this is a biography. I’m a real bystander; I’m there as a documentarian on the sidelines. I’ve been to a landfill site, and in sewers, and in hot air balloons, and on chicken farms, so I’ve gone to a lot of different places and recorded a lot of unusual sounds. But previously they’ve been much more about fitting into some kind of compositional agenda I already had. Whereas this was just like throwing yourself in a canoe without a paddle and just seeing where the tide takes you.

MH: I’m going to make a film, a musical about sound.