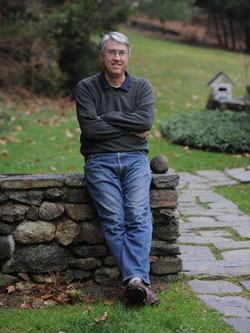 As a writer and editor at Harper’s, The Atlantic, and The New Yorker, David Owen’s written about topics ranging from high school to Xerox machines, and authored four books on golf alone. In his 2004 New Yorker article, “Green Manhattan,” Owen dove head-first into the often-contentious debate about what it means to live green—and hasn’t looked back since. The book that grew out of that article, Green Metropolis: Why Living Smaller, Living Closer, and Driving Less are the Keys to Sustainability, defended the concrete jungle in arguing that Manhattan is the most eco-friendly place in the nation. Owen’s latest book, The Conundrum: How Scientific Innovation, Increased Efficiency, and Good Intentions Can Make Our Energy and Climate Problems Worse, takes a similarly contrarian tack: In it, Owen argues that many of our proposed environmental solutions “either are irrelevant or make the real problems worse.” He chatted with Mother Jones about the problem with wanderlust, Newt Gingrich’s space dreams, and why we won’t bulldoze Atlanta—even though maybe we should.

Mother Jones: Most people think of energy efficiency as an unambiguously good thing, but you argue it’s not. What’s the problem?

David Owen: If you look at the history of people from the beginning, our history is a history of steady increases in energy efficiency. But there’s never been a point in human history where that’s caused us to consume less, where that’s caused energy efficiency to fall—and you see that throughout, in every category of energy consumption. If you look back far enough, over the long term, over the size of the whole economy, the better we get at doing things, the more things we do.

MJ: So if efficiency won’t solve our energy problems, what will?

DO: After the financial collapse in 2008, the world global footprint and carbon footprint shrank—but not because of increased environmental consciousness, because oil got expensive and people drove less, stopped heating their swimming pools, and so on. People who’ve lost their jobs pollute less, factories that go out of work pollute less. We know how to do those things, but we don’t know how to do them less catastrophically—how to scale back our impact without making life miserable for the people who have to bear the brunt of those changes.

MJ: We don’t seem to be very good at choosing to reduce our consumption. How can we get better at it?

DO: In downtown San Francisco you don’t need a green conscience to be living a green lifestyle. It has nothing to do with commitment, it has to do with infrastructure—you live in a place where people and their destinations are very close together, close enough to be accessible by public transit, where a car’s more likely to be a nuisance than a necessity. Such a person will also by necessity be living in a smaller space than someone in a sprawling suburb, who won’t have a yard to be inundating with water and chemicals. Those are the ideal reforms—that don’t rely on transformation of human nature, but put people in situations where they can only do the right thing.

“We’re not going to bulldoze metro Atlanta…But we do need to adjust the incentives so that when population growth occurs, we encourage ways of developing that are less destructive than those that exist now.”

MJ: Okay, but I also know lots of people who live in apartments and bike to work but then fly across the country several times a year.

DO: Flying is a good example of turning increases in efficiency into reductions in consumption. The modern jetliner is much more efficient than jets in the early days—but energy consumption related to air travel hasn’t fallen. It’s kept travel very cheap, even with fuel prices what they are. So, Boeing has a new, more efficient jet, but we’ve been running that experiment with jets for more than 40 years. We know what the result is—it’s not that energy consumed by flying goes down. We might have flown just as much with efficiency gains, but I don’t think so. If the only car available were the Model T, for example, we wouldn’t have the car-dependent culture that we have today.

MJ: So what can we do about places where it’s not easy to live without a car?

DO: Well, we’re not going to bulldoze metro Atlanta. We’re not just going to remake the world in anybody’s vision. But we do need to adjust the incentives so that when population growth occurs, we encourage ways of developing that are less destructive than those that exist now. Almost all the incentives now encourage sprawl. If we handle this differently through land-use laws, tax incentives, etc., to encourage growth from the center out.

I don’t think any of these are easy to do or necessarily popular. But in college, you lived on campus, in a dorm; as a young adult, you live in an apartment. My mother, on the other hand, lives like a college student—in a small space. At both of those ends, with young adults and older adults, we know how to organize people so that they live in this much smaller energy and carbon footprint. The problem comes when you have a family and start to look around and realize it’s hard to have a family in New York or San Francisco. The big problem is that big middle chunk, where you want a yard, cars, all this heated and cooled space to move around in.

MJ: So is the only sustainable option a hyperlocal future where we all live in cities and never leave them? Is there any hope for people who like to travel?

DO: It’s our wanderlust that’s the trouble….The main environmental gain from trains over planes is that people don’t like it as much, you wouldn’t go to LA for a meeting, and then come back the next day if you had to go by train. So there’s a gain there—travel would fall. But just because a train is more energy efficient than an airplane, that doesn’t turn trains into an environmental benefit. If you think about global travel, if you think about being able to go anywhere in a day, and all you have to do is sit down for a few hours and watch movies, the astonishing luxury of it—if you think about what we can do, it’s incredible, but it’s too easy.

MJ: Does that mean we can’t travel to space? Guys like Newt Gingrich and Jeff Bezos and Richard Branson all seem to have some pretty serious intergalactic wanderlust—do we have to crush their dreams?

DO: Yeah, if you’re going to cross luxuries off your list, you’d think, space travel, maybe? But that sort of is the way we think, and I’m sure we’ll have “green rockets”—I mean, Branson talks about how green his rockets will be. It’s hard to imagine even Gingrich takes the moon base idea seriously, but who knows.

MJ: The Obama administration’s approach to energy seems to be the opposite of what you’re arguing for—it’s basically just “the more energy, the better,” saying that we need to develop every source of energy at the same time.

DO: I don’t think you can be elected to political office running on my book. Steven Chu is the energy secretary of US, not of the world—he has to think about a lot of things that go beyond the ugly side of all these issues. Energy efficiency is very appealing—every country’s for it. Americans pay too little for energy—we don’t pay enough for these devices that we don’t even think about. But there’s no great public clamor for making energy more expensive for ourselves. In fact, there’s the opposite—when the price of oil rises, all the clamoring is in the other direction, to drill for oil in places that were too environmentally sensitive, to reduce taxes on gasoline, subsidize all these things.

MJ: So how do we muster the political will to do the harder, less appealing things?

DO: We could do a lot of things with renewable energy, but it would necessitate a huge investment, and also a major cutback in consumption, because they just don’t work as well as fossil fuels do. You’d be very disappointed if you ran your car off your solar array outside your garage. There’s a reason people don’t have solar-powered cars—they’d give up on them very quickly. Any switch to renewable forms would require real sacrifice. Increases in energy efficiency would make it possible for us to regain the losses. If we could constrain consumption of fuels, getting more from energy we use would be a very good thing. We could live a good life with a much smaller footprint. But the limits have to come first, before the efficiency gains.

MJ: What do you think of the anti-Keystone and anti-fracking movements—big environmental campaigns that are trying to mobilize people around energy issues?

DO: With Keystone, the ideal thing is to leave all that stuff in the ground—whether it comes to US by pipelines or through other refineries it doesn’t really matter either way. The really difficult question is how to leave it in the ground. It’s not cheap to turn tar sands into petroleum, but cheap natural gas makes it much cheaper. Something that worries me is the rebranding of natural gas as the “good fossil fuel”—I’ve even heard it referred to as not a fossil fuel by someone who should know better. It also shows the peril of how efficiency can double back—the sudden abundance of a cheap fossil fuel is not going to make it more attractive to build the huge infrastructure needed for solar and things like that.

There are so many reasons to be concerned about fracking. I think it shows another challenge, which is that problems innovate too. The problems don’t just sit there while we try to solve them—they’re constantly getting harder to solve. And usually there’s more funding behind the problems than behind the solutions. Though it’s unfair to say that the interests behind fracking are corporate interests—most people are interested in cheap energy too. It’s very hard to think of how we’re going to persuade ourselves not to be interested in cheap energy.

MJ: So are we doomed?

DO: I don’t think we are doomed, but it will be impossible to look at solutions unless we look at the problem as it actually is. There are so many ways that we avoid looking at it, either because we have so much personally invested in whatever our approach happens to be, or to attract the money that’s out there, or because we have a sense of what’s politically possible and what’s not—but I don’t think any kind of solution is possible unless we do.