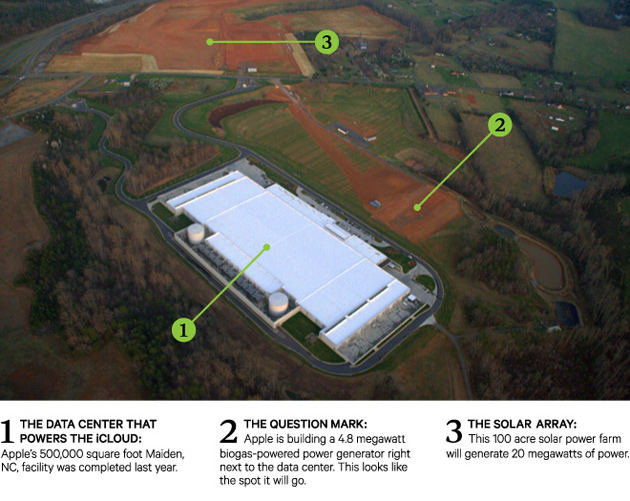 This story was produced by Wired as part of the Climate Desk collaboration. Earlier this week, Climate Desk staffers James West and Tim McDonnell traveled to Maiden, North Carolina for a close-up view of Apple’s giant new data center.

Call it the battle of Maiden. This week, Apple and Greenpeace traded very public barbs over how much clean power is used by Apple’s $1 billion state-of-the-art data center in Maiden, North Carolina.

But it appears that much of the arguing stems from their inability to agree on what they’re arguing about.

The truth may be somewhere in-between.

According to Greenpeace, Apple’s data center relies too much on coal-produced electricity, and the company hasn’t done as much as it could to secure other, more environmentally friendly sources of power. They’ve even produced a video to make the point:

Apple is clearly unhappy with the report. After all, it’s adding some unprecedented green-energy generating features to the site, including a massive solar array on the site along with a 5-megawatt biogas generator. “We believe this industry-leading project will make Maiden the greenest data center ever built,” said Apple spokeswoman Kristin Huguet, in an email message.

So why the disconnect? Greenpeace says it got the 100 megawatt number by doing a simple calculation: 1MW of power demand for every $15 million spent on the data center plus 50 percent extra for non-computer energy demands. Apple, they add, has said it plans to spend $1 billion at Maiden over the next decade.

But that $1 billion figure isn’t exactly the right number to use when compared to Apple’s 20 megawatt figure. When it announced the Maiden facility last year, Apple pegged its investment at $500 million. The company has reportedly told local officials that it expects to invest a total of $1 billion on the site over the next decade—presumably to pay for the green energy initiatives and maybe even building a second data center when the need arises—but that hasn’t happened yet.

That makes the difference less stark. Using Greenpeace’s same metrics, that would put the current Maiden facility at 50 megawatts.

Even so, Greenpeace’s Gary Cook questions Apple’s power consumption figure. “It seems low even for the size of the existing shell they have there if you look at other facilities” he says. “I would expect as they continue to ramp up that facility, it will continue to go north.”

What he’d like to see is a commitment from Apple to keep buying renewable energy, even as it expands the data center.

That’s what Google has done, he says. “They’ve actually put data centers in locations where the grid’s not very green, but hey have matched this with long term 20 year contracts for big chunks of wind,” he says. “Companies like Apple and Microsoft could be doing this as well. There are wind developers who would like to bring their power to market. If they had forward-looking companies signing long-term contracts, that would help bring more power on the grid.”