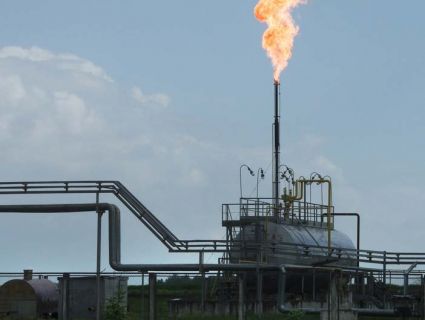 The last four months have been rather bumpy for Chesapeake Energy Corp., the nation’s second-largest natural gas company behind Exxon Mobil.

Starting in April, Reuters took aim at the company’s flamboyant chief executive, Aubrey McClendon, in a series of articles, prompting his ouster as company chairman (he remains CEO) last month at the behest of disgruntled shareholders. The revelations also triggered an SEC probe.

The company was rocked anew last week when the news agency disclosed a series of email exchanges in which McClendon and other Chesapeake executives appeared to collude with officials at EnCana Corp., Canada’s largest natural gas company, to suppress the price of land leases in Michigan.

Reuters reported on Monday that the Justice Department has launched a probe into whether these communications violated laws against price fixing.

As a prominent player in the national debate over hydraulic fracturing, Chesapeake was hardly a stranger to controversy even before the Reuters investigation. Last May, ProPublica reported that Chesapeake was fined more than $1 million by Pennsylvania state officials — the largest fine the state had issued to an oil and gas company — for contaminating water supplies in Bradford County.

The company’s business practices earlier came under criticism when it emerged in mid-2009 that Chesapeake’s board gave McClendon a $112.5 million pay package in 2008 even as the company’s stock dropped 58 percent amid slumping natural gas prices. The contract, which included a $75 million bonus and other generous perks, was brokered as McClendon staved off a personal financial crisis by selling off approximately $552 million worth of Chesapeake shares over a three-day stretch to cover margin calls.

Shareholders expressed their displeasure with the generous compensation package, the highest awarded to any Fortune 500 CEO in 2008, by suing Chesapeake. In 2011, as part of a settlement, McClendon agreed to buy back a collection of antique maps sold to the company for $12 million under the 2008 plan. Today, the 52-year-old, who owns a 19 percent stake in the NBA’s Oklahoma City Thunder, has an estimated net worth of $1.1 billion.

Here are some of the key findings from the recent Reuters series:

Reuters reported that it was unclear whether the rival energy giants “consummated any collusive agreements,” but an analysis of the auction results showed that “neither company bought any land in the same county as the other.”

In the event of criminal prosecution, the potential consequences are substantial. Under the Sherman Antitrust Act, price fixing is a felony, punishable by fines of up to $100 million for companies and $1 million for company officials.

The scrutiny of Chesapeake’s corporate practices comes during a prolonged slide in natural gas prices, which reached their lowest levels in a decade in April. Chesapeake has a projected cash flow shortfall this year surpassing $10 billion.

The spotlight on the company isn’t going away: on Monday, Bloomberg reported that over its 23-year history, Chesapeake had paid just $53 million in income taxes on $5.5 billion in pretax profits, a rate of about 1 percent, thanks to a rule that allows U.S. oil and gas producers to postpone payments to account for the inherent costs of well drilling.