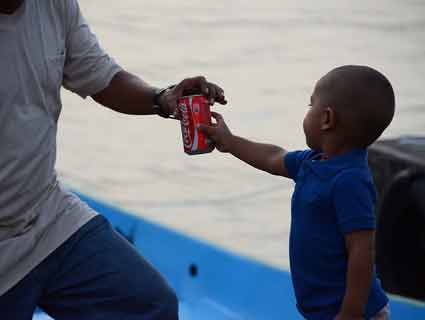 Soda regulation has been in the spotlight for a while now. The city of San Francisco brought up the idea of a soda tax back in 2009, though it was killed before legislation was even introduced. New York City Mayor Michael Bloomberg’s recent proposal to limit the size of sodas in the city has gotten New Yorkers pretty worked up. And now, Richmond, California, a Bay Area city with a population of just 105,000 and a gritty, working-class reputation, is moving closer to instituting its own measure to curb consumption. Will it succeed? Not if the beverage lobby has anything to say about it.

In May, Richmond’s city council approved a ballot measure that will ask voters this November whether they want to impose a fee of $0.01 per ounce on the retail establishments that vend sugar-sweetened beverages, in the interest of reducing the high obesity and diabetes rates in the city. The new tax would put a new license fee on grocers, restaurants, and anyone else who sells not just soda, but sports drinks, teas, fruit juices, and anything else with added sugars. As my colleague Maddie Oatman reported, this kind of tax can have a measurable impact on consumption.

The Richmond measure came from city councilman and retired cardiologist Jeff Ritterman. “These sugar-sweetened beverages are a health menace, and we have to do something very bold, both to decrease consumption and to invest in programs and projects that promote healthy eating and active living,” he told Mother Jones.

The Richmond proposal swiftly drew criticism from the American Beverage Association, the primary trade group representing major nonalcoholic drink manufacturers like Coca-Cola and Pepsi. ABA is no fan of the idea of a soda tax, calling it “misguided” and arguing that it “will not reduce obesity, nor will it have a truly meaningful impact on obesity-related health conditions such as diabetes, coronary disease, or metabolic syndrome.” According to the Center for Science in the Public Interest, the ABA and its members have spent up to $70 million on lobbying and ad campaigns to kill other proposed soda taxes.

In the weeks since the council approved the ballot measure, the ABA has turned its attention—and money—toward Richmond, providing funding for a political campaign committee called the “Community Coalition Against Beverage Taxes.” The campaign includes a slick website asking people to vote “no” on the ballot measure, a pre-fab letter to councilmen and the mayor, and paid “organizers” going door-to-door to collect signatures. They’ve also created T-shirts and signs for people to hold up at council meetings that read “No to Higher Food Costs” and sent street teams to local ethnic celebrations like Cinco de Mayo and Juneteenth to rally community members against the tax.

The campaign filing for the Community Coalition Against Beverage Taxes lists only one specific funder—the ABA—as well as “thousands of Richmond residents, labor, and business against unfair taxes.” ABA’s vice president of public affairs Karen Hanretty declined to put a dollar amount on the support it has given to the campaign, and an idea of how much money they’ve invested in it might not be available until the campaign disclosure information is released at the end of July. But it’s clear that the association can put quite a bit of money into campaigns if it wants; in 2009 it spent nearly $19 million on federal lobbying, its biggest year to date, to keep a soda tax out of the health care reform bill.

The Community Coalition Against Beverage Taxes’ Flickr account features photos of cute kids and families enjoying soft drinks. Its tweets include, “‘Sugar Tax’ is a ‘tax on poor people.'”

San Francisco-based public affairs consulting firm Barnes Mosher Whitehurst Lauter & Partners was hired to manage the campaign. The firm’s vice president of media and communications Chuck Finnie confirmed that ABA contributes the “principal funding” to the initiative, retaining his firm to coordinate the petitions, paid media, mails, and public relations. The campaign has also retained top-flight California campaign law firm Nielsen Merksamer Parrinello Gross & Leoni, LLP, and as California Watch reported last month, was able to rent an office in downtown Richmond to house the campaign and have paid “organizers” in the community.

Neither Finnie nor Hanretty hid the fact that the ABA is involved with the campaign, but ABA’s role is not always readily apparent in the campaign’s public face. The Community Coalition Against Beverage Taxes has a website, Facebook page, a Flickr account featuring photos of cute kids and families enjoying soft drinks, and a Twitter feed, which tweets things like, “‘Sugar Tax’ is a ‘tax on poor people.'” None of them mention that the campaign is supported by ABA. The website was registered by Goddard Claussen Public Affairs, the DC-based consulting firm (which was recently renamed Goddard Gunster) that has handled previous anti-soda-tax efforts in New York in 2010 on behalf of ABA. The firm is also running the ABA’s astroturf campaign “New Yorkers for Beverage Choices,” which is trying to stop Bloomberg’s new proposed ounce limit on sodas.

Finnie argues that the soda tax is not an excise tax (like those on cigarettes); rather, it’s a business licensing fee that will raise the costs of doing business in Richmond overall and increase consumer prices. In the course of our 30-minute conversation, Finnie called the tax a “publicity stunt” four times and accused the tax proponents of “demagoguery” and of “demonizing” sugar-sweetened beverages three times each. “We’re always going to represent the beverage industry, and I think fight for people’s freedom of choice to buy the beverages that they think fit their lifestyle,” echoed ABA’s Hanretty. “That’s been the case all around the country.”

In addition to the ABA, the soda tax has some homegrown opponents too. The most vocal among them has been City Councilman Courtland “Corky” Boozé, one of two councilmen who voted against putting it on the ballot. He argues that the tax will burden the city’s poor residents, doesn’t deal with more important problems in the city like unemployment and crime, and will only be used to address the city’s budget deficit. “We have a pretty large community of economically suppressed people,” said Boozé in an interview with Mother Jones. “I’m disappointed because it’s a regressive tax.” The local Teamsters, too, have come out against the tax, arguing that diminished soda sales might lead to job loss among members.

As of July 23, Ritterman said that Richmond Fit for Life, his campaign in support of the tax, had just $10,000 on hand. The councilman can often be found at public events hauling 40 pounds of sugar around in a wagon—which is about how much sugar the average American consumes each year.

Harold Goldstein, the executive director of the California Center for Public Health Advocacy, said that passing the tax would be a “game-changer.” Unlike in other cities, where the idea of a soda tax has come down from the city council or mayor, the question of whether to impose a tax has been posed to the public at large. “Across the country people are watching what’s going on in Richmond,” he said. “It’s pretty clear that the beverage industry knows that would open the floodgates for cities all around the country to impose taxes in their city.”