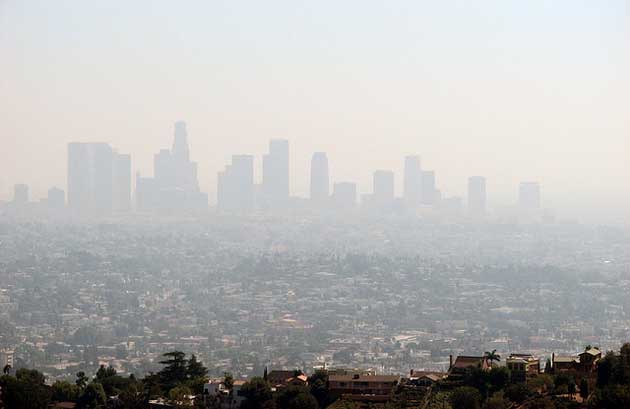 “Cap and trade” may be a dirty expression inside the DC Beltway, but as of today in California it’s the law of the land. Gov. Jerry Brown has brushed aside dire warnings from the fossil fuel industry to forge ahead with the state’s first-ever auction of emissions permits under its groundbreaking climate law, AB 32. This morning’s auction marks the official launch of the world’s second-largest carbon market.

At heart, the concept is elegantly simple. Suppose you wanted to persuade a group of 10 pack-a-day smokers to cut back, and you controlled the cigarette supply. In the beginning, you’d provide the group with 200 cigarettes (10 packs) a day, which they’d have to bid for. That’s the “cap.” Then, each month, you would reduce each person’s daily allottment of smokes, gradually lowering the cap. The people who managed to smoke less could sell their extras to the more hardcore smokers for whatever they were willing to pay. That’s the “trade” part.

Cap and trade is the same: In this case the state of California sets an upper limit on the number of tons of carbon dioxide that can be emitted. It then lets big polluters—factories, power plants, oil refineries, etc.—bid on emissions “allowances.” The government lowers the cap each year by making companies surrender a portion of their allowances. So polluters must either reduce their emissions or buy extra allowances from the polluters that have. If a new polluter comes along, he has to buy in at the going rate. And so the system gives businesses flexibility while creating a financial incentive to slash emissions.

AB 32 “is the strongest and boldest move yet in the US to combat climate change.”

The system created by AB 32 is not the nation’s first—that honor goes to the Regional Greenhouse Gas Initiative (RGGI) enacted in 2008 by 10 Northeastern states. But it’s the most ambitious to date, requiring that California return to its 1990 emission levels by 2020. “It is the strongest and boldest move yet in the US to combat climate change,” says Fred Krupp, president of the Environmental Defense Fund (EDF). “California’s innovative policies can lead the way for the nationwide effort needed to cut emissions and reduce climate impacts from across the globe.”

Unlike RGGI (say “Reggie”), which only covers emissions from power plants, AB 32 targets every major source of greenhouse gas, from cars to cows to factories. It ratchets down emissions using a large toolbox of policies that include a low-carbon fuel standard, renewable energy mandates, and smart growth. And though the cap and trade component only covers large-scale polluters, it is widely viewed as a key step toward an integrated international climate policy. “California is the 8th-largest economy in the world and the 12th-largest emitter of carbon,” says Alex Jackson, legal director of the Natural Resources Defense Council’s California Climate Project. “So for an economy of that size to move forward with a plan this comprehensive, I think we might see a new paradigm start to emerge.”

Of course, much can go wrong with cap and trade. In the European Union, which created the first and largest carbon market after ratifying the Kyoto Protocol in 1997, the price of carbon dioxide emissions allowances rose to more than $42 per ton before plunging almost to zero during the recent economic downturn—in part because it allowed polluters to purchase cheap carbon offsets from abroad. Similar volatility has plagued RGGI—one key reason why Gov. Chris Christie called the program “a failure” last year and pulled New Jersey out of the initiative.

The state Chamber of Commerce has asked a court to stop the auctions, claiming they  impose, in effect, “an invalid tax or unconstitutional fee.”

California has learned from those setbacks. “AB 32 has been touted as the strongest and best design for a cap and trade program anywhere in the world,” says Timothy O’Connor, director of the EDF’s California Climate and Energy Initiative. Unlike RGGI or the EU climate initiative, California’s program sets a price floor ($10 per ton) on emissions allowances, which all but guarantees that retrofitting a facility to, say, recapture steam heat or utilize solar panels or fuel cells will make long-term economic sense.

Opponents argue, basically, that cap and trade will work too well in California. Tomorrow’s auction stands to raise at least $23 million, but the California Chamber of Commerce claims that the price tag for taxpayers could eventually rise to $70 billion or more. (Supporters counter that the costs will be modest). Yesterday the Chamber asked a California court to halt the auctions because they “would impose what is in effect an invalid tax or unconstitutional fee.”

Likewise, the AB 32 Implementation Group, which includes many petroleum-intensive businesses, has petitioned Gov. Brown to stop the auction lest he trigger an economic meltdown. But California voters are ready to move ahead; in 2010, they rejected Proposition 23, which would have delayed AB 32’s implementation until the state unemployment rate dropped below 5.5 percent for a full year. A state-funded study actually found that AB 32 will modestly increase employment.

While the oil industry suggests that California is rushing into cap and trade, the evidence suggests otherwise. Unlike Europe, the state spent years collecting emissions data so that it could issue the right number of allowances. Existing polluters will receive 90 percent of their allowances for free. The law also allows the use of certain carbon offsets, which may drive down compliance costs even more. All of which has left some environmental groups worrying that AB 32 doesn’t go far enough fast enough. “We don’t know if we will be able to get the reductions as quickly as we need them,” says Kathryn Phillips, director of the Sierra Club’s California chapter.

But, Phillips adds: “Because of politics we have not been able to persuade Congress that this is the goal that we must get to. I think that’s one of the most valuable parts of AB 32: setting a goal that we as a society must meet.”