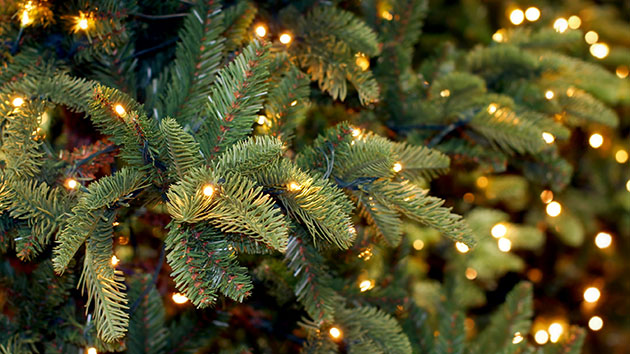 Growing up, I never owned a real Christmas tree. When I was about 14 and living in the Pennsylvania suburbs, my mom bought a fake, pre-lit, easy-to-assemble one from the local department store for our apartment. We’ve kept it for more than a decade since.

Each winter when we’d bring the tree out of the box I’d feel proud that our holiday cheer didn’t require chopping down a tree. But a part of me envied the rich pine scent that filled my friends’ living rooms. So last week, when one of my roommates proposed that we buy a real Christmas tree for our home of four in San Francisco, I was tempted. But what about the environmental impact? I decided to do some digging to find out.

The Christmas tree custom we know today is said to date back to the 1500s, when Lutherans in western Germany would hang wafers on their trees on December 24th to celebrate the religious holiday of Adam and Eve. The idea was to mimic the “paradise tree,” a fir hung with apples that represented the Garden of Eden in a popular medieval play.

My environmental concern is not new: In the early 1900s Theodore Roosevelt banned putting up a Christmas tree from the White House because felling trees went against his conservation efforts. Before tree farms grew commonplace around the ‘40s, most people harvested their trees from nearby forests. Today, no more than 2 percent of Christmas trees in the US are chopped in the wild; most are grown on farms and harvested for sale during the holiday season. Real trees are about three times as popular as fake ones, with about 33 million sold annually, according to the Environmental Protection Agency. But artificial trees are quickly gaining popularity: According to the Christmas Tree Checkoff Task Force, a group of industry producers and importers, the market share of natural Christmas tree sales declined by 6 percent between 1965 and 2008, while the share of fake trees multiplied more than sixfold in the same period (PDF).

A significant fraction of older artificial trees are probably exposing children and adults to enough lead to be at least a noteworthy public health issue.

It’s not hard to see why people like my mom and me opt for fake trees over real ones: They’re cheaper, easier to set up and take down, less messy (pine needles lose their appeal once they’re all over your carpet), and more durable. But when it comes to the environment and your health, naturally grown trees are in most ways better than the manufactured kind. Most environmental groups and publications (including this one) that have written about the subject argue that real trees are better mainly because fake ones are made of polyvinyl chloride, or PVC, a nonrecyclable plastic. Many also balk at the fact that the bulk of plastic trees are imported from China, enlarging their carbon footprint (PDF).

A 2009 study by the consulting firm Ellipsos determined that “when compared on an annual basis, the artificial tree, which has a life span of six years, has three times more impact on climate change and resource depletion than the natural tree.” Some reports claim manufacturers use lead and other additives—which have been linked to liver, kidney, neurological, and reproductive system damage in animals—to make fake tree needles more malleable. A 2004 study in the Journal of Environmental Health on artificial trees and lead exposure among children concluded: “While clearly not an acute toxicity threat by themselves, a significant fraction of older artificial trees are probably exposing children and adults to enough lead to be at least a noteworthy public health issue.”

Real trees, on the other hand, have environmental benefits, even if they’re only used for one season. According to the University of Illinois Extension, approximately 350 million Christmas trees are growing on about 170,000 acres of farms in all 50 states. That’s more than enough trees to cover the area of Chicago. During the 6 to 10 years they grow before harvest, the conifer farms can serve as a source of habitat for local birds, insects, and other wildlife. After the lights and ornaments come down, the trees can be composted or recycled in your garden, a nearby pond, or used for outdoor firewood. In San Francisco, where I live, the city collects trees in early January and turns them into wood chips to burn for boilers.

The artificial tree has three times more impact on climate change and resource depletion than the natural tree.

Still, even for real trees there’s room for improvement. Last month, researchers at Villanova University published a study finding that better land management on Christmas tree farms, such as increasing ground cover or possibly through reducing pesticide use, can increase their carbon storage capacity. (MoJo‘s Sydney Brownestone has more on the study here.)

And even if chemicals aren’t harming the trees’ surroundings, what about the farmworkers? “The people with the greatest exposure to pesticides are those that apply it,” says Jill Sidebottom, a forestry specialist at North Carolina State University. The longer the duration and higher the rate of pesticide application, the greater the risk. Christmas tree farming does, however, require chemicals. According to the consumer advocacy group Beyond Pesticides, only 1 percent farm Christmas trees are grown organically; all other farmers use pesticides and herbicides including Roundup and Dimethoate to keep the trees free of pests and holes. A few forestry researchers and professors I asked said that compared to other crops, Christmas trees are actually pretty light on pesticide usage. “If you look at the continuum of chemical use in US agriculture, Christmas trees production certainly ranks on the low end,” says Bert Cregg, an associate professor specializing in forestry and horticulture at Michigan State University. Pesticide use in Christmas trees in the state is “similar to use in tobacco and about one-fourth of what is used in apple trees,” Sidebottom adds.

But back to my tree search. I called up Mei Ling Hui, the San Francisco environment department’s resident urban forest expert, who recommended I buy a potted Christmas tree to plant later. Potted trees are more expensive than cut ones—with prices starting from around $50 (pre-cut ones start around $30) and upward depending on height—but I was willing to give the idea a chance. I was excited to find out that an increasing number of farms are renting out potted trees—and taking them back after the trees have served their decorative purpose. But the nearest rental service I found was at a farm in Carmel, two hours south of San Francisco. Since I don’t have a car and the farm doesn’t deliver up here, this was pretty much out of the question. 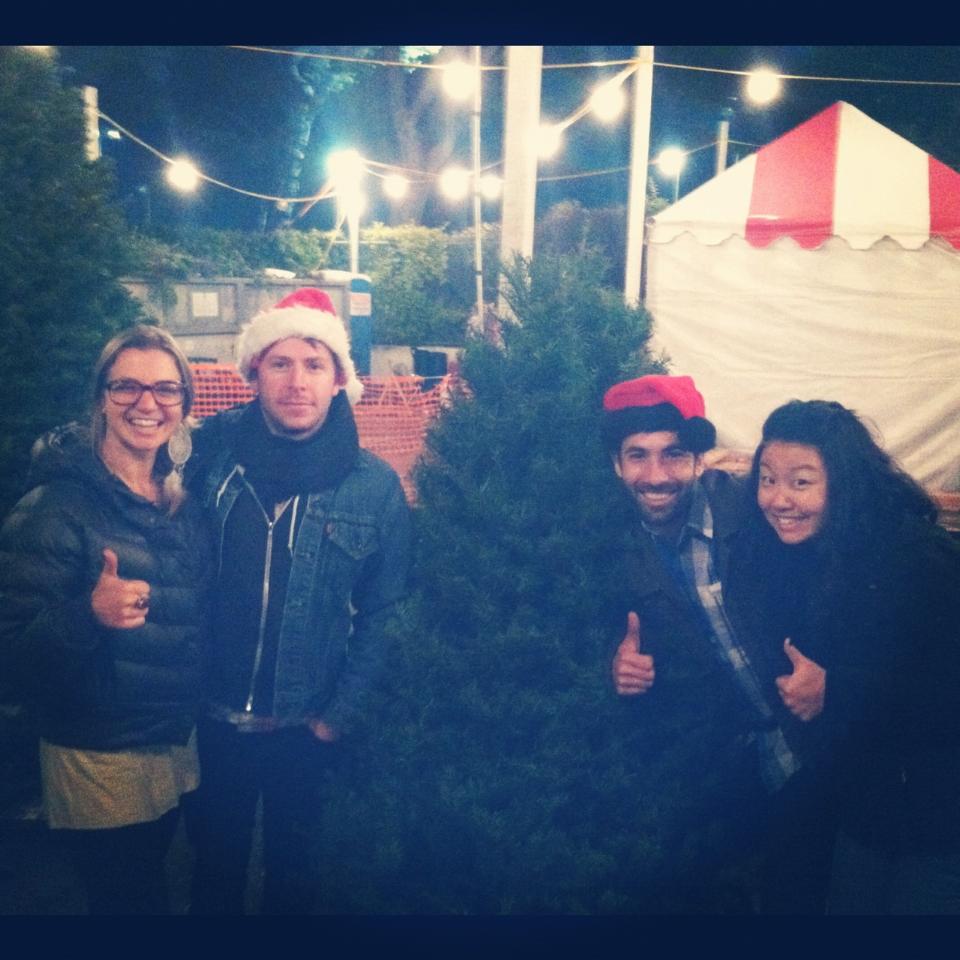 Here we are at a tree lot in San Francisco.

Disappointed, I weighed my options. The next greenest bet after a potted tree, suggested Hui, would be to go to a nearby tree farm or park and—gasp—chop my own. Though this meant discarding our tree after use, the DIY method does have its selling points: It can be inexpensive (permits cost between $5 and $10 depending if you go to a state or national park), and its carbon footprint would probably be smaller than the pre-chopped trees sold in San Francisco, which are commonly shipped from Oregon and Washington. But cutting your own Christmas tree is an all-day affair and also requires driving outside the city. So no dice.

In the end, my roommates and I settled on buying a pre-chopped, 6-foot-tall Douglas fir from a lot just a few miles from our home. This particular lot gets its trees from a farm the owner’s uncle runs in Molalla, Oregon, about 620 miles north of here. It wasn’t the most environmentally sound choice, but it was an informed one. And we did find one compromise: After spotting a compost dumpster containing scraps of fir tree branches, we picked a few bundles to turn into wreaths. 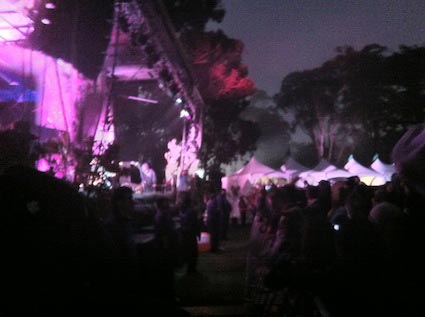