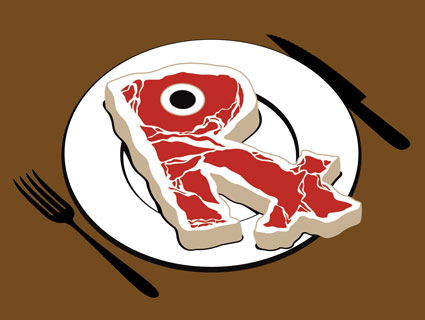 Like hospital patients, US farm animals tend to be confined to tight spaces and dosed with antibiotics. But that’s where the similarities end. Hospitals dole out antibiotics to save lives. On America’s factory-scale meat farms, the goal is to fatten animals for their date at the slaughterhouse.

And it turns out that antibiotics help with the fattening process. Back in the 1940s, scientists discovered that regular low doses of antibiotics increased “feed efficiency”—that is, they caused animals to put on more weight per pound of feed. No one understood why, but farmers seized on this unexpected benefit. By the 1980s, feed laced with small amounts of the drugs became de rigueur as US meat production shifted increasingly to factory farms. In 2009, an estimated 80 percent of the antibiotics sold in the United States went to livestock.

This year, scientists may have finally figured out why small doses of antibiotics “promote growth,” as the industry puts it: They make subtle changes to what’s known as the “gut microbiome,” the teeming universe populated by billions of microbes that live within the digestive tracts of animals. In recent research, the microbiome has been emerging as a key regulator of health, from immune-related disorders like allergies and asthma to the ability to fight off pathogens.

In an August study published in Nature, a team of New York University researchers subjected mice to regular low doses of antibiotics—just like cows, pigs, and chickens get on factory farms. The result: After seven weeks, the drugged mice had a different composition of microbiota in their guts than the control group—and they had gained 10 to 15 percent more fat mass.

Why? “Microbes in our gut are able to digest certain carbohydrates that we’re not able to,” says NYU researcher and study coauthor Ilseung Cho. Antibiotics seem to increase those bugs’ ability to break down carbs—and ultimately convert them to body fat. As a result, the antibiotic-fed mice “actually extracted more energy from the same diet” as the control mice, he says. That’s great if you’re trying to fatten a giant barn full of hogs. But what about that two-legged species that’s often exposed to antibiotics?

Interestingly, the NYU team has produced another recent paper looking at just that question. They analyzed data from a UK study in the early ’90s to see if they could find a correlation between antibiotic exposure and kids’ weight. The study involved more than 11,000 kids, about a third of whom had been prescribed antibiotics to treat an infection before the age of six months. The results: The babies who had been exposed to antibiotics had a 22 percent higher chance of being overweight at age three than those who hadn’t (though by age seven the effect had worn off).

The connection raises another obvious question: Are we being exposed to tiny levels of antibiotics through residues in the meat we eat—and are they altering our gut flora? It turns out that the Food and Drug Administration maintains tolerance limits for antibiotic residue levels, above which meat isn’t supposed to be released to the public (PDF). But Keeve Nachman, who researches antibiotic use in the meat industry for the Johns Hopkins Center for a Livable Future, told me that the FDA sets these limits based solely on research financed and conducted by industry—and it refuses to release the complete data to the public or consider independent research.

“We may not understand the biological relevance of exposures through consuming meat at those levels,” he says. Indeed, a recent European study showed that tiny levels of antibiotics could have an effect on microorganisms. The researchers took some meat, subjected it to antibiotic residues near the US limit, and used a traditional technique to turn it into sausage, inoculating it with lactic-acid-producing bacteria. In normal sausage making, the lactic acid from the starter bacteria spreads through the meat and kills pathogens like E. coli. The researchers found, though, that the antibiotic traces were strong enough to impede the starter bacteria, while still letting the E. coli flourish. In other words, even at very low levels, antibiotics can blast “good” bacteria—and promote deadly germs.

Nachman stressed that we simply don’t have sufficient information to tell whether the meat we eat is messing with our gut microbiome. But, he adds, “It’s not an unreasonable suspicion.” If that’s not enough to churn your stomach, there’s also the fact that drug-resistant bugs—which often emerge in antibiotic-dosed livestock on factory farms—are increasingly common: Remember the super-salmonella that caused Cargill to recall 36 million pounds of ground turkey last year? Luckily for me, it’s unlikely that drug-laced meat will mess with my gut. I think I’ve lost my appetite.