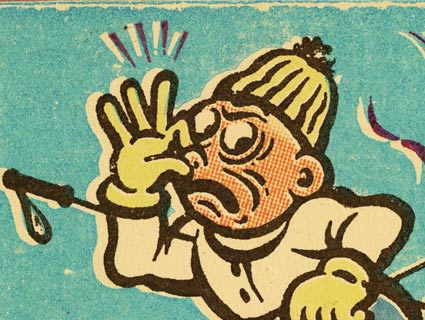 Sometimes a bad application of a good idea can make the idea itself seem worse. Examples abound: communism, social Darwinism, the last two seasons of The Office. And then there’s Arizona Snowbowl, a ski resort outside Flagstaff that’s poised to become the first to make all of its artificial snow from reclaimed sewage water. In wetter regions, resorts often get that water from nearby lakes or rivers, “but we simply don’t have those resources,” says resort general manager JR Murray. So Snowbowl intends to pump as much as 1.5 million gallons of reclaimed water each day from a source roughly 15 miles away.

Now one could argue—and many have—that Snowbowl never should have been built here in the first place. Perched atop a 9,000-foot extinct volcano in the scenic San Francisco Peaks, it has been plagued by water shortages since its founding 75 years ago. Some seasons there isn’t enough snowfall to make the place profitable. “The very notion of committing water to skiing in Arizona is silly,” says Taylor McKinnon, who directs public lands campaigns at the Center for Biological Diversity. “Pumping it 15 miles uphill with globe-warming coal electricity is plainly irresponsible.” (Roughly one-third of the state’s power derives from coal.) What’s more, local tribes, who have long opposed the ski resort, say that the artificial snow would further desecrate the peaks they consider sacred land.

The resort’s myriad opponents have seized on the gross-out potential of “poop and pee snow,” as one ski blog called it. My inner 10-year-old agreed, but the more I learned about reclaimed water, the less sure I was. It turns out that the water Snowbowl would employ is already widely used around Flagstaff to irrigate public parks, soccer fields, schools, and lawns. This is hardly a new phenomenon: Arizona built its first sewage recycling facility way back in 1926; other Southwestern states followed soon after. Today, the Environmental Protection Agency estimates that the United States reclaims about 8 percent of its sewage water; four states—Arizona, California, Florida, and Texas—are responsible for as much as 90 percent of that figure.

Population growth and climate change mean that water is becoming ever more scarce in the Southwest. In 2011, the Stockholm Environment Institute predicted that if development and warming continue apace, groundwater shortages in the Southwest could cost taxpayers as much as $15 billion by 2050. Shane Snyder, a reclaimed-water expert at the University of Arizona’s College of Engineering, told me there are three options for hydrating the drought-prone Southwest: You can import freshwater from other states, pump desalinated ocean water from coastal facilities, or use local recycled water. Recycling “is a much less energy-intensive option, so it’s also much cheaper,” Snyder explains. (That’s assuming a reclaimed-water system is already in place; building a new one is beyond the means of many small towns.)

So how clean is the stuff? A 2006 analysis of Flagstaff’s reclaimed water turned up traces of endocrine disruptors in the supply, and a 2012 study found evidence of antibiotic-resistant genes. (Yes, like something out of a Michael Crichton novel, free-floating pieces of DNA can actually collect in pipes and be taken up by bacteria and other organisms, leading to greater antibiotic resistance across an entire ecosystem.) But studies have identified similar pollutants in tap water nationwide. And consider what happens to treated sewage that we don’t recycle: It is released into local waterways, where some of it gets put back into—you guessed it—our municipal systems. “Actually, almost everyone drinks reclaimed water,” Snyder says. “People get their water from sources that have a lot of waste in them.”

In some cases, recycling sewage and treating it to usable standards can even prevent it from polluting bodies of water—one facility near San Jose, California, diverts wastewater away from fragile salt marshes. Our treatment facilities are improving, too. Residents of Southern California’s Orange County and a few other locales benefit from pricey new plants that can turn sewage into drinking water using a technique called reverse osmosis. It will be some time before this technology is widely affordable, but we can do almost as well with far cheaper methodsÂ­—the water Flagstaff uses for irrigation is just one step below potable.

So despite my initial misgivings about “poop and pee snow,” it now seems to me that it would be a lot grosser to not use reclaimed water. That said, I’m not sure it should be squandered on a drought-plagued ski resort. “If it weren’t for this opposition…we’d be winning awards for our use of this water,” Snowbowl’s Murray told me. “It’s only a bad idea when it comes specifically to us; otherwise it’s a great idea.”

Couldn’t have said it better myself.