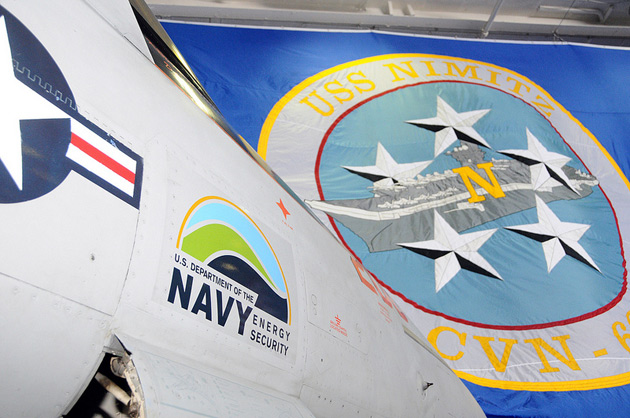 Last summer, it looked as if the Great Green Fleet—and, for that matter, the military’s entire biofuel push—was dead in the water. Ticked off by what they said were exorbitant costs and misplaced security priorities, conservatives in the Senate vowed to sink the plan. “Adopting a ‘green agenda’ for national defense, of course, is a terrible misplacement of priorities,” Sen. John McCain (R-Ariz.) told reporters last May. Sensing an opportunity to knock President Obama on his national-security cred and extend a Solyndra-style “green cronyism” narrative, his wingman, Sen. James Inhofe (R-Okla.), succeeded that summer in slipping an amendment into the defense budget that would block the Navy from spending any money on biofuel. But in the aftermath of Obama’s reelection, the Senate revolted against Inhofe: 11 Republicans joined 49 Dems and two independents in killing his amendment in late November. “Rather than placing roadblocks in front of the Navy’s plans, Congress should help it in its effort,” Sen. Susan Collins (R-Maine) wrote in a Politico op-ed with Sen. Jeanne Shaheen (D-N.H.). “When’s the last time 62 senators agreed on anything?” says Michael Wu, director of Operation Free, a clean energy and security campaign that lobbied against the amendment.

It was the latest episode in the through-the-looking-glass universe where admirals, generals, and defense contractors go mano a mano with conservative politicians to push a green agenda. This green/camo coalition deploys the same kind of spin and pork barrel maneuvering used to justify budget-busting planes and tanks—only it’s about running military engines on algae, seeds, and used French-fry oil. The biofuel initiative is “not only essential for continued military operations,” says Wu, summarizing the argument that swayed Congress, “it’s also in the national economic interest. That really got to Republicans, especially those in the Southeast with biomass potential, and the Midwest with agricultural centers.”

Trade groups also got in on the action, Wu notes, seeing the military’s renewables venture as a proving ground for their own interest in biofuels: “There is a lot of interest from the private sector. Fuel costs are 35 percent of the overhead for the airlines, and they have a very narrow profit margin.” 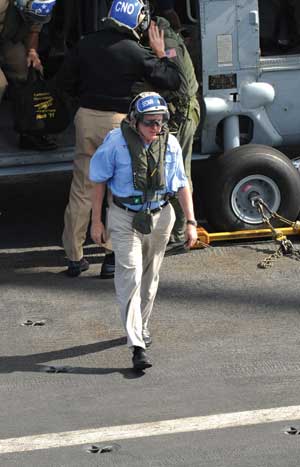 The rapprochement between military leaders and greens goes back to the 2000s, says former Maj. General Mike Lehnert, an engineer who oversaw the Marine Corps’ seven bases west of the Mississippi and worked with environmentalists to reduce the service’s ecological footprint. (He also led 5,000 Marines in the Iraq invasion and helped construct the detainee prison at Guantanamo before retiring in 2010.) Back then, the goal was conservation, as Lehnert and others sought to beat back encroaching development near military facilities. “A country worth defending is a country worth preserving,” he says—or, more pragmatically, “environmentalists need large, open expanses of space where endangered species can recover and thrive. The military needs large, open expanses of space so they can train.”

But the real turning point was the Iraq War, which focused the brass on the cost in dollars and bodies of America’s need for oil: “Most places in the world that have fuel are not democracies,” Lehnert says. “Our foreign policy is dictated by that dependence. Nobody knows better the costs than those young men and women who risk their lives to defend them.”

That insight manifested itself in everything from battlefield practice (in 2011, General David Petraeus ordered troops in Afghanistan to curtail their use of lights and AC to save “operational energy”) to Pentagon structure: In 2010, Congress, in cooperation with military leaders, created a special office, run by an assistant defense secretary, to oversee the services’ energy security efforts.

But then, the green offensive hit a blockade—on Capitol Hill. Republicans who have rarely seen a defense program they don’t like are aggressively skeptical of military greening, with Inhofe charging that Obama is shoving solar-style boondoggles down the DOD’s throat to “move his green agenda under Defense so that we’re paying for all this.” 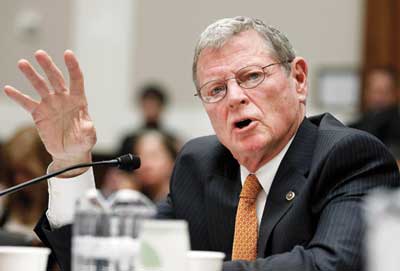 Military leaders are not blind to the public-relations benefits of going green, sometimes virtually racing each other to craft environmental programs and press releases trumpeting them. But, says Bernard Finel, an associate professor of national-security strategy at the National War College, that doesn’t mean it’s all greenwashing. “I think, on the whole, there is very little artifice or political calculation in DOD about engaging this issue,” he says. “Their job is to plan for the future.” America’s strategic orientation away from land wars and toward Pacific maritime supremacy means more deep-water patrolling; that’s why the Navy faces a growing problem of “fueling the force,” and green tech helps it diversify its energy sources. That strategic imperative looms large for defense planners—even if they’ve grown adept at describing it in differing rhetorical terms, depending on their political audience. “In a Democratic administration, DOD leaders will note that this is environmentally sound,” Finel says. “In Republican administrations, greening will occur on the grounds of risk mitigation, cost controls, and mission effectiveness.”

Finel argues that the military is well positioned to act on climate change because it’s focused on adaptation rather than mitigation. “They need to plan for the impact of rising sea levels because it affects bases,” he explains, “but they don’t need to weigh in on whether rising sea levels are a function of human activity, long climate cycles, sun spots, or whatever.” That’s a luxury the EPA doesn’t have.

Still, in a Congress where “climate” is virtually a dirty word, that may not be enough to insulate the Pentagon’s green initiatives. Environmentalists in uniform could have a new ally in Chuck Hagel, who’s long championed studying climate change, if only for its “unpredictable and destabilizing effect” on other countries. Then again, with his hawkish credentials under attack on Capitol Hill, Hagel just might be tempted to quickly reverse course on the Great Green Fleet.