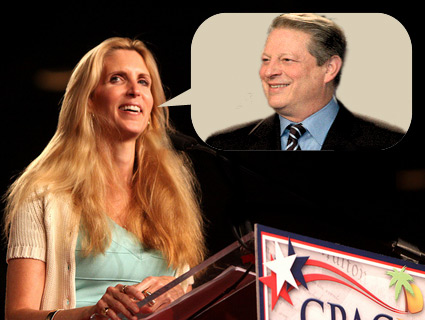 Ever notice that when conservatives want to attack the science of global warming—or the idea that we ought to do something about it—they almost always find a way to rope in Al Gore? Occasionally, they even try to debunk the science by denigrating Gore personally, in a kind of guilt-by-association gambit.

One of the most striking examples came from Ann Coulter, who wrote in a column in early 2007:

The only place Al Gore conserves energy these days is on the treadmill. I don’t want to suggest that Al’s getting big, but the last time I saw him on TV I thought, “That reminds me—we have to do something about saving the polar bears.”

Funny stuff, huh? Coulter’s attacks on the former vice president’s weight were extreme—but new academic research on conservative syndicated columnists and their writings on global warming suggests that the anti-Gore approach is surprisingly common. In a study in the journal American Behavioral Scientist, sociologists Shaun Elsasser and Riley Dunlap of Oklahoma State University provide the data to back up what has long apparent on an anecdotal level—that conservative writers are nearly monolithic in their dismissal of what scientists know about the climate crisis. And one of their preferred rhetorical tactics is to incessantly mention Gore.

Elsasser and Dunlap demonstrate as much based upon analyzing the content of the website Townhall.com, a widely trafficked repository of conservative punditry. The scholars found 203 conservative op-eds about climate change published between 2007-10, a time span that included events such Gore receiving the 2007 Nobel Peace Prize, a new report by the Intergovernmental Panel on Climate Change, and the “Climategate” pseudo-scandal. Many of the op-eds were written by highly prominent syndicated columnists such as George Will (who wrote eight climate change articles in four years), Thomas Sowell, Cal Thomas, Jonah Goldberg, and Coulter.

The overall finding? Rather amazingly, the authors found that every single article in their sample was “critical of the notion that anthropogenic climate change is a serious problem,” as Dunlap put it to me. In the paper, the authors even remark on the “near hegemonic status of this orientation among conservatives.” 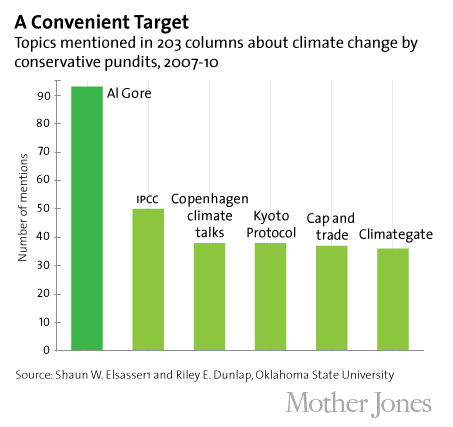 Granted, sometimes conservative pundits did acknowledge some aspects of climate science, before going on to critique the overwhelming push towards policy action. But in terms of making substantive statements about science, for the most part the pundits echoed long-debunked claims about climate change—e.g., “it’s not happening,” “humans aren’t causing it,” and so on.

To categorize the science-denier arguments found in these columns, the researchers turned to the website SkepticalScience.com, which has made a specialty of this. They found that by far the most popular claim was denying that there is a scientific “consensus” on global warming. More than 60 percent of the columns did this, making it the most popular denialist argument. Second most popular? Nearly 40 percent of the articles suggested that the planet is actually undergoing global cooling.

There were some other fascinating findings. There were clear peaks in right-wing anti-science punditry, tied not to important scientific findings, but rather to key events: Gore winning a Nobel and an Oscar for An Inconvenient Truth, and Climategate. The latter coincided with the biggest peak, with 35 op-eds being produced in the month of December 2009. This suggests that conservative columnists were choosing to weigh in at key moments when they felt that climate change science needed discrediting, or alternatively, when they felt like it had been discredited.

There were also overwhelming patterns in what types of topics the conservatives focused on. As mentioned, they were utterly obsessed with Al Gore: 93 of the 203 columns discussed him. One favored subtopic: Al Gore’s personal energy use (for a fact-check discussion, see here). Given that conservatives’ No. 1 assertion is that there’s still an argument over global warming, you’d think they’d do a better job of actually making one.