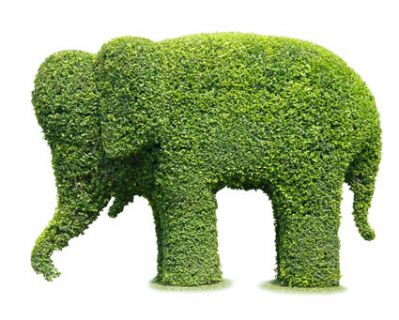 It’s a truism at this point to observe that Americans are deeply polarized—along party lines—on climate change. The surveys that have attested to this reality are, by now, too numerous to count.

But beneath that depressing surface, there’s a less appreciated and more hopeful reality. If it were somehow possible to strip away the overlay of angry political rhetoric—not to mention doing something about all the scientific misinformation that is constantly being broadcast and rebroadcast by the likes of Rush Limbaugh—a bipartisan political consensus on climate change might really be possible.

That’s one upshot of a new public opinion study by the climate public opinion dynamos at George Mason and Yale universities (the George Mason Center for Climate Change Communication and the Yale Project on Climate Change Communication, respectively). The researchers surveyed 726 Republicans and Republican-leaning independents, finding 77 percent support within this group for expanding US reliance on clean and renewable energy.

But even more intriguing is how these Republicans and right-leaning centrists responded to two carefully crafted messages. Clearly influenced by past research, the messages were framed to appeal to the conservative sense of moral purity in one case, and conservative individualistic, free-market values in the other.

Here was the “purity” message—which also contained a hefty infusion of “tradition” by invoking Benjamin Franklin:

Carbon pollution is fouling our air and our water, and harming our health. We should take steps to maintain the purity of our air and water. As Benjamin Franklin said, an ounce of prevention is worth a pound of cure. Which best describes your feelings about this?

After reading this conservative argument, 64 percent of respondents agreed that the US should take action on climate change. Within that group, 25 percent said the US “absolutely” should do something, and 39 percent said it “probably” should.

And then there was the free-marketeer frame:

Our free-enterprise economy only works properly when individuals and companies are held accountable for harm that their actions cause to unconsenting people or the country as a whole. Companies that release heat-trapping pollution into the air should be accountable for those costs. Which best describes your feelings about this?

After reading this argument, 60 percent of the respondents supported climate action—22 percent saying steps should “absolutely” be taken, and 38 percent saying something “probably” ought to be done.

The study did not examine how Republican voters respond to liberal messages for action on climate change—but past research has attempted this, and the answer isn’t exactly pretty. In one study, for instance, when political conservatives were shown a fake newspaper article that framed the science of climate change as supporting an “anti-pollution solution to global warming”—presumably suggesting environmental regulations, perhaps by the EPA—their denial of the science actually increased, relative to a group of conservatives who had not been shown any newspaper article.

The significance of the latest findings, notes Ed Maibach of the George Mason Center for Climate Change Communication, is that “on issues related to energy and climate change, the Republican leadership may be out of step with a significant portion of their base and other relevant voters.”