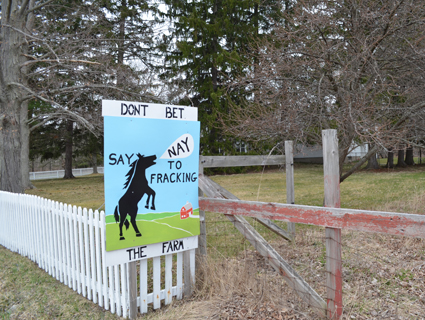 There was a time not so long ago when the most contentious issue in Dryden, New York, was hiring a new dog catcher. Situated in New York’s Finger Lakes region, Dryden is a rural town with a population of just 14,500 spread over 94 square miles. It’s “a little more progressive than your average upstate town,” explains town supervisor Mary Ann Sumner, because it gets some spillover residents from nearby Ithaca, a college town. “But we’re still just an upstate town,” best known for dairy farms and cornfields.

But everything changed in August 2011, when Dryden became one of the first towns in New York to ban fracking. Natural gas interests swiftly sued, putting the once sleepy spot in the middle of a nationwide debate over gas drilling. Last week, after a spending a year and a half in court fighting to protect its ban, Dryden became the first town in the state to prevail over the gas industry—in a case that could set a precedent for other towns that are trying to keep frackers out.

In 2008, New York imposed a statewide moratorium on fracking, until more research could be done on the environmental and health effects of the practice. But towns all over the state have tried to find their own way to exert control over the industry if and when the state decides to let drilling go forward. Fifty-four other towns have fracking bans in place, and another 105 have passed moratoria. The court’s decision last week also upheld a similar ban in Middlefield, a town in central New York, and the two cases together are expected to give traction to the other towns looking to take similar actions.

I visited Dryden in early April as the town was awaiting the appellate court’s decision. Supervisor Sumner and I chatted in her log home on an overcast morning, watching through big glass doors in her kitchen as squirrels skittered around a bird feeder.

Dryden residents worried about big trucks on the roadways, increased demand on emergency services, and potentially higher housing prices as workers come in from out of town.

Dryden sits atop the Marcellus Shale, a rock formation that runs under Pennsylvania and upstate New York. Back in 2006, when Sumner had just joined the town board, new studies were starting to trickle out showing far larger estimates of the natural gas contained in the shale than previously thought. A process known as hydraulic fracturing, or fracking, which uses a high-pressure mixture of chemicals, sand, and water to break into those rock formations, also allowed them to tap into these new reserves. The fracking boom had already started to take hold in nearby Pennsylvania, and landsmen soon began descending on upstate New York, offering property owners leases to secure the right to drill. In Dryden, some landowners were eager to lease, while others were less sure. Most just didn’t really know to expect.

Around 2008, Sumner says, citizens began to express concerns about the prospect of drilling in town after hearing reports of environmental and social impacts in other parts of the country. Some of the residents soon organized the Dryden Resources Awareness Coalition, or DRAC, and began circulating petitions asking the board to bar fracking in the town, citing worries about air and water pollution. Sumner says the social impacts were perhaps the most concerning for the town: big trucks on the roadways, increased demand on emergency services, and potentially higher housing prices as workers come in from out of town. “The more we learned, the more we realized we really couldn’t prepare for some of these impacts,” said Sumner.

Under New York’s Oil, Gas and Solution Mining Law, towns can’t regulate oil and gas; that can only be done at the state level. Many towns first assumed there was nothing they could do to stop fracking entirely. But a pair of environmental lawyers from nearby Ithaca, Helen and David Slottje, figured out that towns might be able to use zoning rules to bar that type of industry from coming in instead of trying to regulate it, since zoning is left to towns to determine. “People had had it beaten into their heads there’s nothing they can do,” said Helen Slottje. “Then two lawyers from Ithaca say, ‘We think you can just say no.’ That was perceived as pretty radical at that time.” The Slottjes worked with other nearby towns, including Ithaca, to pass measures before it went to a vote in Dryden.

There were four or five months of heated debate, with residents showing up in droves at board meetings, Sumner recalled: “It became pretty contentious, pretty loud.” On the day they finally voted on the measure, there were more than 100 people in the room; about a third of them were opposed to the ban, but the majority was there to support it. “It was pretty damn passionate on both sides,” Sumner said. “And everybody is scared. That’s the really sad part. The pro-ban folks are scared that their lives are going to be changed, and the anti-ban folks are scared that their rights are being diminished somehow.”

“After I signed the lease and started learning, I would have given it back to them in a second if I could,” said one Dryden resident who rented land to frackers.

Though the plan had its critics, the Dryden board voted in August 2011 to bar oil and gas development within its borders, by a unanimous, bipartisan vote.

One of the most active residents pushing for the ban was Marie McRae, a spokeswoman for DRAC who lives and boards horses on a small farm in southern Dryden. In May of 2009, she signed a five-year lease on her 13 acres. She says she agreed just to get the landsmen to leave her and her husband alone, after they spent months trying to convince them to lease and threatening that they would be able to come drill anyway. “I felt really, really backed into a corner,” McRae told me as we sat on her couch on a rainy early April morning. She and her husband got about $1,200 for signing. “After I signed the lease and started learning, I would have given it back to them in a second if I could,” said McRae.

But McRae does understand why some of her neighbors were eager to sign leases. “A lot of farmers around here are land rich and money poor,” she said. “So they had a lot of acres that could be drilled, theoretically, and they signed that lease with the thought that they could be a millionaire. That’s a really powerful image.”

One of those neighbors is Paul Cook, who lives two and a half miles north of McRae. Cook, 76, has wild gray hair and was dressed in denim overalls when I met him. His old white farmhouse was a bit rundown; he asked me to pardon the mess, explaining that he was a widower. He bought the farm in 1960, and still grows some corn and soybeans here, though he now rents part of his land to other farmers.

Back in January 2007, when the companies were knocking on everyone’s door, Cook leased 240 acres to Ansbro Petroleum Company at $100 an acre. He used the money from the lease to pay off creditors. “A nice little shot in the arm, but it didn’t last long,” he said. “On a farm nothing lasts long.” He hoped that, when the company drilled, he might make some more money off royalties. But because of Dryden’s new zoning ordinance, they never drilled. The lease ended in 2012, and now there are no more landsmen knocking on his door.

Just a few weeks after the board approved the ban, Anschutz Exploration Corporation, which had leased a total of 22,200 acres in town, announced it was suing. The company argued that the town was overstepping its rights by regulating the gas industry. It’s hard to say why the industry picked Dryden as the town to take to court. It could be because Anschutz had spent $4.7 million on leases there, making it a prime target. Or it could be because there was some particularly vocal local opposition in the town.

The trial court, however, sided with Dryden in a February 2012 decision. Anschutz appealed but later dropped out of the case; another fracking company, Norse Energy, decided to continue the suit instead. But last Thursday, the four judges on for the appellate court in New York’s Third Judicial Department unanimously agreed that state law “does not preempt, either expressly or impliedly, a municipality’s power to enact a local zoning ordinance banning all activities related to the exploration for, and the production or storage of, natural gas and petroleum within its borders.”

The lawyer for Norse has said his client will seek to appeal to the state’s Court of Appeals. However, because Dryden has already won twice, the plaintiff would need special dispensation from the state’s highest court to have the case heard again.

Now that Dryden survived the suit, Slottje says, “I think there are going to be a lot of towns that are emboldened to proceed.”

Deborah Goldberg, an attorney with the environmental law firm Earthjustice, which defended the town in court, thinks the decision will have influence even beyond New York in other places where fracking is a top concern. “It has got to be a morale boost to people who have been suffering the adverse affects of this industry,” Goldberg said, “to see people in a small town stand up to an incredibly powerful and wealthy industry and win.”