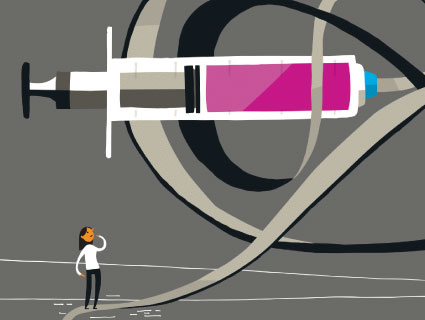 Much ink has been spilled railing against vaccine skeptics—you know, those people who don’t get their kids immunized against catastrophic childhood diseases because they believe the shots can cause autism and other serious problems. In a recent Parade magazine piece, reporter Seth Mnookin, author of The Panic Virus: A True Story of Medicine, Science, and Fear, pointed out that vaccine resisters tend to cluster in places “where parents are often focused on being environmentally conscious and paying close attention to every aspect of their children’s development.”

Journalist Megan McArdle, in a 2011 post for The Atlantic, opined: “We spent most of the last century trying to stamp out the infectious diseases that used to cripple and kill hundreds and thousands of people every year. Sometimes it seems like the bobo elites plan to spend the 21st century bringing them all back.”

These “bobo elites” are fair targets, especially if you live somewhere like Marin County, California, whose schools granted “personal belief exemptions” to 7 percent of kindergartners in 2010—enough to compromise what epidemiologists call herd immunity. Some of these vaccine resisters refuse shots outright, while others opt for alternative vaccination schedules that delay and stagger shots. This increasingly popular system minimizes kids’ exposure to supposedly harmful vaccine ingredients—but it also leaves them more vulnerable to outbreaks.

Yet the vaccine resisters and delayers are not the only parents whose kids miss out on shots. Far more children are undervaccinated for reasons unrelated to personal beliefs, according to a January 2013 study funded by the Centers for Disease Control and Prevention (CDC).

The study found that an astonishing 49 percent of toddlers born from 2004 through 2008 hadn’t had all their shots by their second birthday, but only about 2 percent had parents who refused to have them vaccinated. They were missing shots for pretty mundane reasons—parents’ work schedules, transportation problems, insurance hiccups. An earlier CDC study concluded that children in poor communities were more likely to miss their shots than those in wealthier neighborhoods, and while that may not be too surprising, it’s still a dangerous pattern. “If you’re going to delay one or two vaccines, it’s not going to make a huge difference,” says the new study’s lead author, Jason Glanz, an epidemiologist at the Kaiser Permanente Colorado Institute for Health Research. “But you could also think of it like this: If a million kids delay their vaccines by a month, that’s time during which a disease could spread.”

That’s no mere hypothetical. In 1990, for example, an outbreak of measles killed 89 kids in the United States—most of them from poor families who said they couldn’t afford the vaccine. A 2008 outbreak in San Diego resulted in 12 cases, this time among kids whose parents had refused the vaccine—but authorities had to quarantine an additional 48 who were too young to be vaccinated. The episode cost taxpayers an estimated $10,376 per case.

Shannon Stokley, the acting associate director of science at the CDC’s National Center for Immunization and Respiratory Diseases, told me that many parents simply need a reminder. “You have so many things to remember when you have a child, and vaccines can just slip your mind,” she said. Indeed, sending out reminder texts has been shown to increase vaccination rates. Making shots convenient also helps. In response to a whooping cough outbreak last year, the state of Washington sought to get more teens and adults vaccinated. It plastered buses and billboards with ads; in some harder-hit counties, health departments sent out mobile inoculation units—if people couldn’t make it to a clinic, health workers would bring the shots to them. Within a year of the campaign, the adult vaccination rate had doubled.

To be sure, access to vaccines has been improving nationwide. The federal government now offers free shots to children who aren’t otherwise covered. But the program doesn’t cover adult vaccines, most of which cost from $20 to $100, even for diseases that are easily passed from adults to kids, like whooping cough—which can kill infants.

Unfortunately, short of an outbreak, money for expanded access is hard to come by. “It took an epidemic to make our pertussis push possible,” says Tim Church, a spokesman for Washington’s health department. And while Obamacare will make vaccines cheaper, it won’t ensure that people actually get their shots.

Because I live in Northern California, where whooping cough has been a problem among adults—those childhood shots don’t last forever—I recently emailed my doctor to inquire about the adult pertussis vaccine. She invited me to drop in “anytime”—from 9 a.m. to noon or 2 p.m. to 4 p.m., right in the middle of the workday. I’m planning to go in eventually, but finding the time is going to be a hassle. Those undervaccinated people that everyone talks smack about? I guess now I’m one, too.