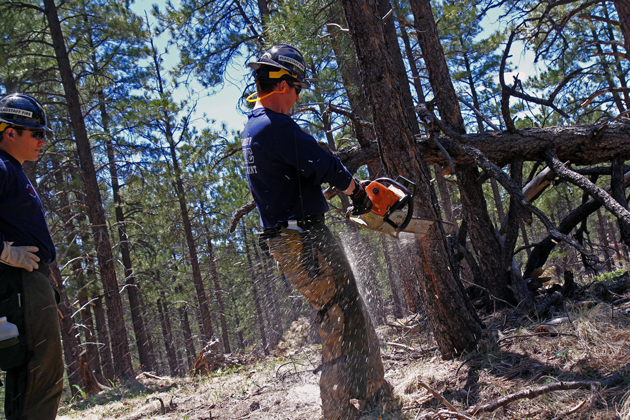 Skyler Lofgren shouts above a din of buzzing chainsaws, leans into his own, and with a final heave topples another 40-foot Ponderosa pine. Lofgren, 27, a forest firefighting crew boss with Flagstaff, Arizona’s fire department, felled a dozen trees on Monday, overseeing an outdoor classroom for a new crop of seasonal recruits who will spend the summer patrolling the Coconino National Forest with three-foot chainsaws at the ready. The crew will fight wildfires when they come, but the vast majority of their time will be spent on prevention or, as Lofgren puts it, “working ourselves out of a job.”

In a stand of trees 10 minutes outside downtown Flagstaff—a tight cluster of low-slung brick buildings peppered with Route 66 paraphernalia—Lofgren and his fellow firefighters are hard at work on a new project that local officials say is the first of its kind in the nation. Funded by a $10 million bond that voters approved by a 3-1 margin in November, the program puts local tax dollars to work clearing trees and brush, and lighting carefully-managed fires, in an effort to stave off the devastating, astronomically expensive megafires that have become increasingly common in the West. If successful, the project could also untether the community from a withering federal firefighting budget.

Last year saw the third-worst wildfire season in five decades; the Southern California fire that threatened thousands of homes earlier this month looks to be only the first flash of what the National Oceanic and Atmospheric Administration announced last week will be an above-average season for much of the Southwest. But the sequester took a 7.5 percent bite out of the Forest Service’s budget, nearly half of which is spent fighting wildfires. That means there will be 500 fewer pairs of boots on the ground and 200,000 fewer acres treated to prevent fires; the agency’s next proposed budget cuts preventative spending by a further 24 percent. It’s all part of what fire ecologists, environmentalists, and firefighters interviewed by Climate Desk describe as an increasingly distorted federal budget that has apparently forgotten the old adage about an ounce of prevention: It pours billions ($2 billion in 2012) into fighting fires but skimps on cheap, proven methods for stopping megafires before they start. 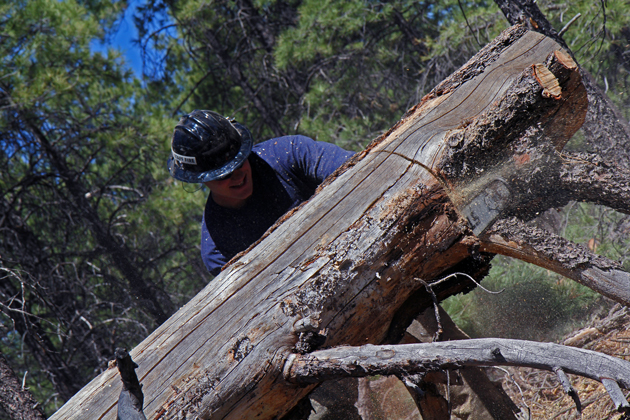 “At this point we’re underinvesting in the problem,” says Diane Vosick, a policy analyst at Northern Arizona University’s Ecological Restoration Institute. “The budget is going in the wrong direction.”

After years of offering (unheeded) advice to the White House’s budget makers, Vosick and her colleagues released a report last week detailing the relative value of investing in fire prevention over firefighting. They found that the bulk of costs from megafires are borne not by the federal government but by local governments—and the federal budgeting process ignores those bills when weighing whether prevention saves money.

Take the Schultz Fire, a June 2010 scorcher that burned 15,000 acres outside Flagstaff. It cost $60 million to put out, but flood damage, lost property value, habitat loss, cleanup, and other post-fire costs more than doubled the bill to $146 million. That difference is largely carried by local agencies and residents. Spend that same $60 million on prevention, Vosick argues, and the other costs likely could have been avoided. If she’s right, Flagstaff’s $10 million bond is a great bargain for local taxpayers.

“[OMB] is just not doing a full-cost accounting,” she says. “When the feds underinvest, it cascades down the system.” 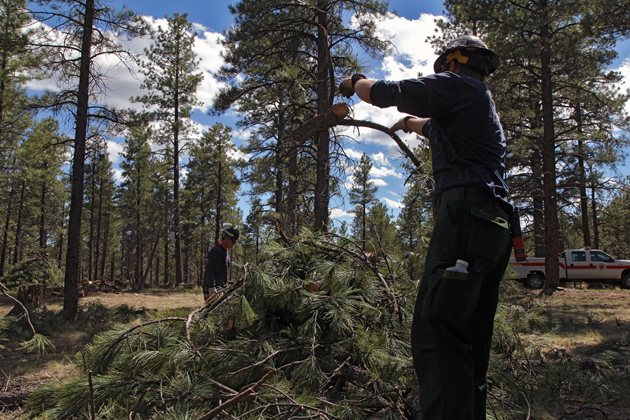 Office of Management and Budget (OMB) spokesman Jamal Brown wrote in an email that funding for prevention projects is focused on high-risk areas where development meets the forest, and pointed out that next year’s proposed budget includes a small earmark to study where investments are most effective. But the agency did not comment on whether it had received or read Vosick’s report.

An analysis of Forest Service budgets provided to Climate Desk by Chris Topik, who directs the Nature Conservancy’s forest restoration program and who has worked closely with OMB for much of his career, reveals that preventative funding as a proportion of the total fire budget dropped 3 percent between 2001 and 2012, from 15.7 percent to 12.9 percent. The proposed budget would shrink that proportion another 3 percent.

“What happens is that firefighting ends up trumping everything else,” Topic says. “[OMB] finds it hard to invest in prevention even though we know it pays.” 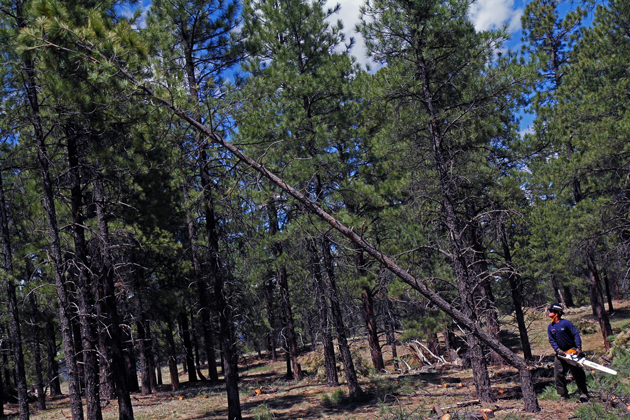 Chris Brehl, a veteran wildland firefighter overseeing Flagstaff’s prevention project, says his city can’t wait around for the feds to get it straight. He maneuvers his pickup truck up a rough, winding forest road, topping out on a high ridge with a breathtaking view of Humphreys Peak, Arizona’s tallest mountain, which saw unusually low snowfall last winter. A bad fire in this bone-dry area, the City of Flagstaff estimates, could cost it $500 million.

It’s impossible to prevent all fires, Brehl says, and not even desirable: Fire ecologists increasingly embrace small, low-intensity fires as critical parts of a healthy forest. Instead, Brehl focuses on “thinning” the forest by removing so-called “ladder fuels,” small trees that can boost a ground fire up into the high canopy, where it can easily catch the wind and explode out of control. Signs of his project are everywhere: Thousands of “slash piles,” stacks of chopped-up trees and brush, litter the forest floor, ranging from waist-high mounds tossed together by Lofgren and his crew, to 15-foot towers of full trunks cut and stacked by massive logging machinery. Some of this detritus will be donated or sold as firewood; the rest will be burned in place when it’s padded by a safe buffer of snow in the winter. 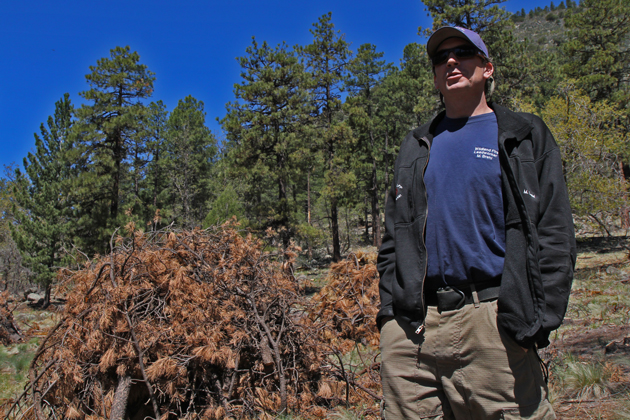 To Brehl, the proof is in the pudding: He’s seen many fires flare up, then stop cold when they hit pretreated areas (his department has done small-scale thinning for over a decade; the new bond will allow them to vastly expand their reach). Locals understand the benefits and have embraced the constant whir of chainsaws and occasional controlled burns, he says: One elderly lady even snuck up behind him during a burn near her house with a plate of milk and cookies.

Back with the fire crew, Lofgren chaws on a wad of sunflower seeds and shows greenhorn Jake Hess, 23, the thinned area behind them and the untreated area ahead: The untreated area is densely packed with shaggy undergrowth, while the treated area is clear enough to drive a truck through. It’s the difference, he says, “between fighting and backing off.” But if you really want to see prevention at work, Lofgren says, come back when this spot is ablaze.

“It’s a great feeling to come back to an area we’ve been through and be able to tell someone, ‘We can protect your house.'”